David, is it actually known if the lunch van/truck did indeed arrive at the TSBD on [November 22nd]?

I think Mark Valenti's question about the lunch truck (or "wagon") in his thread-starting post is a good one, and I cannot answer that question. I'm not sure whether the "caterer" or "lunch wagon" stopped by the Depository or not on 11/22/63.

According to Wes Frazier:

"A caterer service...comes around about 10 o'clock. The man comes around and several of the boys, they go out there and buy their lunch from the catering service."

But as far as I know there's nothing in the official records that indicates whether or not the "catering service man" visited the Book Depository on the day of the assassination.*

Anyway, regardless of the status of the catering truck, we still can be confident (beyond all reasonable doubt) that Lee Oswald did not take his lunch to work on 11/22/63.

The only way my last sentence can be deemed inaccurate is to call Buell Wesley Frazier a liar (or a person who remembered things very poorly, with respect to Oswald telling him that he [LHO] was going to buy his lunch at work that day; hence, Lee Oswald carried no lunch to work from Ruth Paine's Irving, Texas, residence).

And I don't think either of the above "Frazier Was Wrong" options is going to fly very far.

Oswald's rifle was most certainly in the package carried into the building by LHO on the morning of the assassination. To believe otherwise is to believe that an empty 38-inch-long brown paper bag, with Oswald's prints on it, just happened to appear in the Book Depository Building (and inside the Sniper's Nest on the sixth floor of that building; unless CTers want to go down the crazy "The Cops Planted The Bag" road) on the same day that Oswald just happened to carry a different, but similar-looking, handmade paper bag into that same building.

Use your noodle. The last paragraph I just typed out above (all by itself) is devastating circumstantial evidence that merges these two things together perfectly (and logically) into one:

Don't conspiracy theorists ever wonder what really happened to the bag that Oswald took into the building on November 22 (i.e., the bag that CTers will forever claim was "too short" to contain Oswald's disassembled rifle)?

After all, even most conspiracists [except perhaps James DiEugenio] will readily admit to the fact that Oswald carried some kind of long-ish paper bag into work on November 22nd....right?

So, what happened to that bag after the assassination? Oswald didn't take it home to Oak Cliff with him. He wasn't seen with any bag at any other time that day....not by Officer Baker, not by Roy Truly, not by Mrs. Reid, not by any other TSBD workers.

Once again, common sense can answer a lot of questions. And to think that the bag that is in evidence today in the National Archives (CE142) is not the same bag that Oswald carried into the Book Depository on 11/22/63 is, to put it bluntly, just plain silly.

Wesley Frazier said this to prosecutor Vincent Bugliosi and a jury of twelve Dallas citizens at the 1986 television mock trial in London:

VINCE BUGLIOSI -- "Mr. Frazier, is it true that you paid hardly any attention to this bag?"

BUELL WESLEY FRAZIER -- "That is true."

BUGLIOSI -- "So the bag could have been protruding out in front of his body, and you wouldn't have been able to see it, is that correct?"

And during Mr. Bugliosi's closing arguments to the jury, Vince tries to hammer home some of that common sense concerning the paper bag that I was talking about earlier:

"And it's obvious that Oswald carried that rifle into the building that day in that large brown paper bag. It couldn't be more obvious. As far as Mr. Frazier's testimony about Oswald carrying the bag under his armpit, he conceded he never paid close attention to just how Oswald was carrying that bag. He didn't have any reason to." -- Vincent T. Bugliosi; July 1986 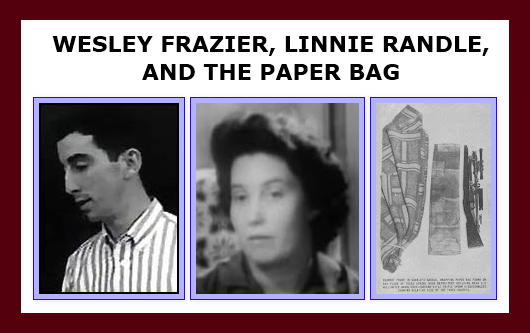