Recently, you suggested that when Roy Kellerman heard a "flurry of shells" come into the car, that he was referring to the sound of bullet fragments from the head explosion striking the windshield. Are you suggesting that the sound of a fragment glancing off the glass is so similar to that of a gunshot, that Mr. Kellerman was fooled?

Of course that's what I am suggesting. Exactly that.

From the totality of evidence that tells any reasonable person that ONLY THREE GUNSHOTS WERE FIRED in Dealey Plaza on 11/22/63, it's quite obvious that Mr. Kellerman's "flurry of shells" and/or "flurry of shots" were the sounds of the head-shot bullet fragments striking the interior portions of the limousine (the windshield and the metal/chrome near the windshield).

Are you, Robert Harris, suggesting that the sounds of bullet fragments striking those objects RIGHT NEXT TO KELLERMAN IN THE CAR made NO audible sound whatsoever?

There's the fact that Secret Service Agent Kellerman is a witness who is on record (at least twice) as having said he heard precisely THREE shots fired in Dealey Plaza. No more. No less. Let's have a look:

"We were still traveling at the normal rate of speed of from 12 to 15 miles per hour when I heard a noise, similar to a firecracker, exploding in the area to the rear of the car, about 12:30 PM. Immediately I heard what I firmly believe was the President's voice, 'My God, I'm hit!'

I turned around to find out what happened when two additional shots rang out, and the President slumped into Mrs. Kennedy's lap and Governor Connally fell to Mrs. Connally's lap. I heard Mrs. Kennedy shout, 'What are they doing to you?'" -- From Roy Kellerman's 11/29/63 Secret Service Report

SENATOR JOHN SHERMAN COOPER -- "Has that been your recollection from the very time of the shooting?"

Mr. Kellerman is entirely wrong about hearing JFK say "My God, I am hit" after being struck by one of Lee Oswald's bullets, but that's another discussion entirely.

But, common sense along with the known physical damage that was done to the front portions of the limousine during the assassination (plus the above "three shots" comments made by Kellerman himself, plus the chart below) can easily solve Roy H. Kellerman's "flurry" testimony. 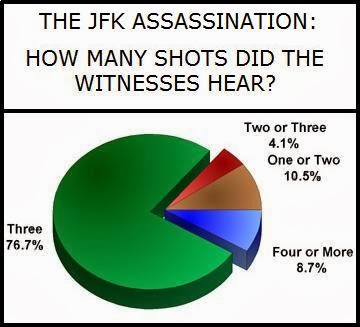