I went to the post where you answered my 20 questions, but I still need clarification regarding these two questions. If you'll provide me that clarification, I'd be happy to provide you with the citations for the right-rear occipital scalp being damaged.

Regarding #1 below, since your April answers, we had a specific discussion in which I clarified my "theory" about Boswell shoving dislodged rear bone pieces (still attached to the scalp) back in place before the X-rays.

Specifically, I made it clear that I thought he did that before the scalp was reflected. Prior to that clarification, you seemed unclear as to my position on that. Ok, so now that you are clear, has your April answer, which was a "yes" [actually a "correct"] changed?

1. Are you 100% certain that Boswell did not shove any dislodged rear bone pieces (that were still adhered to the scalp) back into place before the lateral X-rays were taken?

Based on the available photographic evidence (mainly this lateral X-ray of the right side of JFK's head), my answer to your #1 question above is:

Yes, I am confident that Dr. Boswell could not have shoved any bones back into the REAR of JFK's head.

If Dr. Boswell shoved any "dislodged" pieces of loose bone back into the skull of JFK, it's my opinion (or belief) that any such loose bone pieces/fragments must certainly have come from an area on JFK's head that wasn't in the "occipital" (or far-right-rear) area of the President's head.

I will say this, though, John -- If a better-quality photo of the lateral X-ray ever comes into my possession (or if I should ever be lucky enough to actually see the original X-rays at the National Archives some day in the future), I'll be more than eager to re-evaluate my current position of "There Was No Fragmentation In The Occipital Portions Of JFK's Skull".

And I would certainly be willing to change my current beliefs regarding the condition of the back of JFK's skull if, after looking at any better-quality copies of the X-ray (or the original X-ray), I am able to see additional fracture lines in the BACK (occipital) portions of President Kennedy's head -- i.e., fracture lines that would spell out to me "fragmentation" in the REAR of JFK's skull, mainly in the RIGHT-REAR of the head, which is where John Canal really needs there to be a decent-sized area of "fragmentation" (in other words, the right-rear area of JFK's heads was pretty much "falling to pieces").

But as it stands right now, I'm of the very firm opinion that the X-rays I have seen of JFK's skull do not, in any way, reveal the kind of fragmentation (falling to pieces) in the REAR portions of JFK's head (particularly the right-rear/occipital areas) that Mr. John A. Canal certainly requires in order for his unique "LN/BOH" theory to be accurate.

The SCALP of President Kennedy, of course, is a totally separate and different issue. And I cannot see any way for Mr. Canal's theory to be a correct and true theory with respect to the RIGHT-REAR SCALP of the late President Kennedy, because JFK's scalp is NOT severely damaged in the autopsy photographs pictured below -- nor does it appear to be damaged AT ALL: 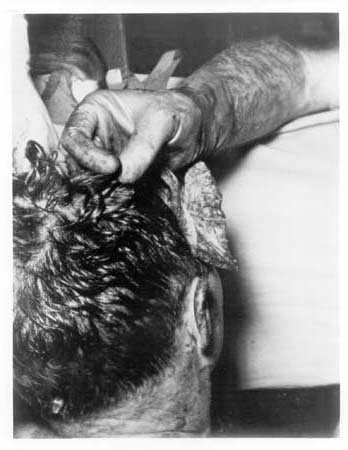 The scalp looks perfect in every way to my eyes in all of the various autopsy photographs I have seen; and the high-quality autopsy photo of the back of JFK's head which was supplied to this newsgroup's members several days ago by John Fiorentino (which I downloaded and examined) only seems to re-confirm my beliefs regarding the right-rear scalp of JFK.

Mr. Fiorentino's excellent quality black-and-white autopsy image (which is the same photo as the second image shown above, except that John's version is clearer and bigger with better resolution) is showing the exact area of the back of JFK's head (scalp/hair) which Mr. Canal keeps insisting was damaged on 11/22/63 as a result of Lee Oswald's bullet.

Mr. Canal believes that the scalp was repaired (sutured on the inside of the scalp) prior to those multiple BOH autopsy photos being taken. But I'd like to know why on Earth NONE of the autopsy doctors could confirm such PRE-PICTURE-TAKING REPAIRS being done on JFK's scalp in the right-rear area of the scalp?

And I'd also like to know why in the world the autopsy doctors, when they testified in front of the various Governmental commissions and committees after 1963, didn't recall the scalp being "stretched" all out of whack when John Stringer was taking the picture of the entry wound?

Dr. Humes (et al) seemed confused as to the precise location of the entry wound in JFK's head when they testified before the HSCA and ARRB, but they never remembered that the scalp had been severely "stretched" (according to Mr. Canal) prior to the taking of the BOH photos.

Why wouldn't Drs. Humes, Boswell, and Finck have remembered such a massive "stretching" of the scalp taking place -- especially when those doctors were undoubtedly straining their brains to try and recall what really did take place at Bethesda at the time the BOH pictures were taken by Stringer?

Regarding question no. 2 below, this question, although similar, is different from the one you answered in April to which you answered, "no". Specifically, I added the scalp-stretching theory to this new version of the question....does it change your answer?

2. Are you 100% certain that the scalp, as seen in the BOH photographs, was not stretched and/or repaired prior to those photos being taken?

See my comments above.

But my (fairly) short answer to this question is -- No, but I'm pretty doggone sure the President's scalp wasn't being stretched several inches in the BOH photos, and I also do not think that the scalp was "repaired" in the "BOH" areas where you think it needed to be repaired.

And that's mainly because I just don't think President Kennedy's right-rear SCALP sustained the damage that you think it did sustain, John.