Tom Alyea was a cameraman for WFAA-TV in Dallas, Texas, when President Kennedy was assassinated in 1963, and Mr. Alyea had the unique distinction of being the only newsman with a motion picture film camera to have access immediately after the shooting to the sixth floor of the Texas School Book Depository Building, from where Lee Harvey Oswald fired three rifle shots at the President on November 22, 1963. [See Alyea's footage above.]

Many conspiracy theorists firmly believe that a whole lot of shady and sinister activity involving the Dallas Police Department was going on inside the Depository Building that day while Alyea was present with his camera rolling.

But a logical question that never seems to get asked by those conspiracy believers is this one:

If the police were on the sixth floor of the TSBD planting evidence (as many people believe was the case), why didn't those evil, evidence-planting cops kick cameraman Tom Alyea off of the sixth floor? Or, at the very LEAST, make him STOP FILMING THE CRIMINAL ACTIVITY that some conspiracy theorists think was going on up on that sixth floor at just about that time?

Does it make any sense to believe the police were up on the sixth floor playing around with the evidence, and yet they let this cameraman, Alyea, FILM what was happening up there? That's crazy.

The very fact that a television news cameraman was allowed to film a lot of the activity on that sixth floor just after the assassination of the President is practically proof enough ALL BY ITSELF that the Dallas police were not planting and/or manipulating any of the evidence on the sixth floor of the Book Depository on 11/22/63.

And we must also keep in mind that cameraman Alyea was filming on that sixth floor when the police were INITIALLY DISCOVERING some of the evidence against the man (Oswald) that many conspiracy theorists think was being framed and set up to take the fall for JFK's murder by those same evil cops.

The rifle that Alyea filmed....

A rifle was found on the sixth floor of the Book Depository at 1:22 PM (Dallas time) on November 22nd, just 52 minutes after JFK was shot by rifle fire from that same building.

Many conspiracists think that the rifle found by the police was a German-made Mauser, instead of Lee Harvey Oswald's Mannlicher-Carcano rifle. But Tom Alyea's film has established that the rifle being handled by Lieutenant J.C. Day of the Dallas Police Department (pictured below) is, indeed, an Italian Mannlicher-Carcano rifle, not a German Mauser. Most conspiracy theorists simply ignore these still photos taken directly from Alyea's film: 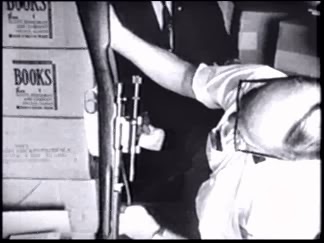 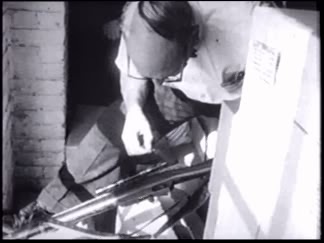