I keep thinking of how little LHO meant to the plot. I am of the mind that JFK was going to run into a hit that day, regardless of whether LHO showed up to work, whether the shooters could get a shot off or whatever other circumstances might have came about that day. There were in all likelihood several back-up plans in place, including taking out AF1 if all else failed.

Since every scrap of evidence leads directly into the lap (and guns) of Lee Harvey Oswald when it comes to the murders of both JFK and Officer Tippit, I cannot fathom how anyone could seriously make a comment like this --- "I keep thinking of how little LHO meant to the plot."

LHO is the mouse that has been made into a mountain; and so many continue to probe and dissect that little dead mouse while gargantuan monsters are yet to be identified.

No, LHO is the double-murderer* who has been turned into an "innocent patsy" thanks to the colorful imaginations possessed by thousands of conspiracy fantasists.

* And the large amount of evidence that favors Oswald's guilt in the JFK and Tippit murder cases proves that I'm right.

Based on the newspaper accounts, neither Oswald nor any Dallas resident could have known the exact motorcade route, for conflicting accounts were published.

Then apparently you, Rich, must think that all of the many people who gathered on both Houston Street and Elm Street prior to the motorcade arriving in Dealey Plaza --- including the likes of Mary Moorman, Jean Hill, Jim Altgens, the Willis family, Charles Brehm, Bill & Gayle Newman, Abraham Zapruder, Mary Woodward, and all of the people who elected to watch the parade from the steps of the Book Depository Building --- just got lucky and guessed correctly that the President's car was going to turn down Houston and then onto Elm. Is that correct?

The reality is, of course, that those people I mentioned above (and many more) knew where to stand along Houston and Elm Streets that day because they all knew, prior to the motorcade ever arriving in Dealey Plaza, that JFK's motorcade would be coming down those exact streets (Houston and Elm). And they knew that information because it was published--in detail--in both of the Dallas newspapers on Tuesday, November 19th, and again in the Dallas Times Herald on Thursday, November 21st (in addition to being announced on both TELEVISION and RADIO between 11:30 AM and 12:00 noon on November 22nd).

We need to remember that the [motorcade] route was changed for the single purpose of framing Oswald...

Is there any chance that conspiracy theorists will ever stop repeating the lie about the motorcade route being "changed"? Because no matter how many times CTers/Fantasists repeat that myth, it will never become a fact. It will always be a lie. And provably so. The proof that the route wasn't "changed" at the last minute (or even in the last three days) exists in Commission Exhibit 1362 and Commission Exhibit 1363.

Prior to Nov 19th, the route would be MAIN to STEMMONS as shown by the diagram.

On Nov 19th, the detail of that non-turn turned into a TSBD corner turn [and] is spelled out. The earlier created map has no turn.

Yeah, David, but the HOUSTON and ELM turns are still nevertheless IMPLIED in all of the various maps that say only MAIN to STEMMONS, including the 11/22 Dallas Morning News map that CTers love to talk about so much. Because the only proper and legal way to get from MAIN to STEMMONS is....

Via Houston then Elm.

So from that "proper and legal" perspective, the CTers who love to chant "The Motorcade Route Was Changed" are still cooked --- because unless you want to believe that the Secret Service was planning to hop the concrete divider that separates Main from Elm, then the Nov. 22nd DMN newspaper actually DOES, in effect, tell us that the limo was going to have to travel down both Houston Street and Elm Street in that truncated map that was published on the DMN front page on 11/22.

Is it or is it not Secret Service protocol to not drop below 25-35mph and not take a slow turn like Main to Houston or Houston to Elm?

If the route included the turn onto Houston, it would be a major breech of safety protocol.

That's absolute nonsense, David, and you surely must know it. The Secret Service took President Kennedy around HUNDREDS of regular 90-degree turns (like the one from Main to Houston) during JFK's three years in office. Therefore, it's ridiculous to think that the regular Main-to-Houston turn was against "Secret Service protocol". It obviously wasn't.

As for the sharper Elm turn --- that turn was obviously not a major concern to the Secret Service on 11/22 either---otherwise they WOULDN'T HAVE DONE IT. Period.

Plus, we know the limo totally stopped on two occasions during the Dallas parade. And if you think slowing the car to below 35 MPH is a protocol violation (which it obviously is not, since the car was going below that speed for almost the entire motorcade through Dallas), then what would be a COMPLETE STOP in your view? That must be a horrific "violation", right?

The CTers who scream "IT WAS AGAINST SECRET SERVICE RULES" are merely repeating what is very likely yet another conspiracy-flavored myth. I doubt any such "Rules" even existed in '63. And even if they did exist "on the books", it's obvious that such "Rules" were not always strictly followed. Nor could they be, unless you believe that the Secret Service would be whisking JFK through cities and towns at above 44 MPH (which is the figure I usually hear from the Conspiracy Mongers when this "protocol" topic pops up). And that's just silly. The motorcades through large crowds never went that fast.

There's this photo [below] taken in Fort Worth on the morning of 11/22/63 (with the President standing up in the car). Does anyone actually think the car is going above 25-35 MPH here? Not a chance. Particularly since the President is standing at the time and the car is turning a corner.

And also take note of the fact that there are no Secret Service agents at all riding outside any of the cars here (or walking alongside JFK's car). The SS follow-up car in the Fort Worth motorcade wasn't the Cadillac stretch limo that was used in Dallas. In Fort Worth, we can see that the Secret Service used just a regular sedan and all of the agents had to sit inside the car (while keeping the doors open slightly so they could get out quickly if needed). There were no running boards to stand on. And, also unlike Dallas, there were no built-in steps (or platforms) on the back of JFK's car in Fort Worth either. Which means, from those specific standpoints I just mentioned, the "security" that was in place in Dallas was actually better than the security utilized for the Fort Worth parade just an hour earlier.

But to hear conspiracy theorists tell the story, the security surrounding JFK's limo in Dallas was the worst that has ever existed. But when we look at just a few photos of other Kennedy motorcades, such as the one below from Fort Worth and these additional examples, we can see that that just is not the case at all. 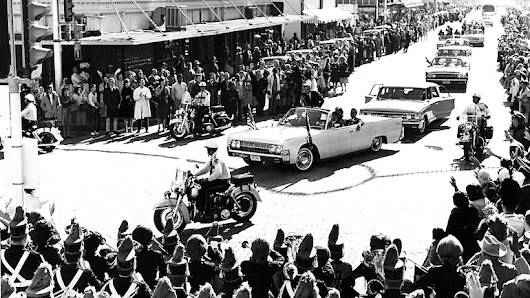 Could one person, Lee Harvey Oswald, pull﻿ off by himself---with no help from anyone else---what he is accused of doing on November 22, 1963? To me, the answer is "no".

Oswald's prints are on the rifle.

Oswald's prints are on various objects inside the Sniper's Nest (where we know President Kennedy's assassin was located).

Oswald definitely lied to Buell Wesley Frazier (and the police) about "the package" and its contents. (So we know the package contained something LHO wanted to hide.)

Oswald had rifle training in the Marine Corps (which certainly made him a better rifleman than your average guy on the street).

Yep. The merry-go-round with the Anybody-But-Oswald CTers never ends, does it? They'll continue to ignore all the signs of LHO's guilt till the cows come a-knockin'.

For one thing, LHO had no connection to the M/C [Mannlicher-Carcano] after he left NOLA [New Orleans, Louisiana]. He went to Mexico City, and Ruth and Marina drove their belongings back to Irving.

(Tons of paperwork to prove that fact.) 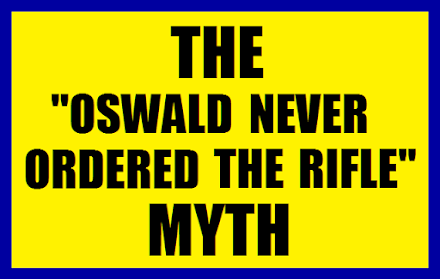 A rifle was seen by Marina in the Paine garage in September or October of 1963.

That rifle was missing from its known storage location in Ruth Paine's garage on 11/22/63.

C2766 was found on the sixth floor of the Book Depository on November 22nd.

A newborn baby could do this math. But for some reason, it always eludes a conspiracy theorist.

David, you're a jerk. You just like stirring the pot to get everyone all riled-up.

BTW...my copy of the November 22, 1963 Dallas Morning News just arrived today and the map clearly shows NO turn onto Houston or Elm. It was the best $100 I spent (on eBay).

I have spent a lot of time buying things [that] you are only able to read about in books or study online. I have the exact rifle and scope Oswald supposedly used. That thing is so heavy there is no way Oswald could have pretended it was a set of curtain rods and walked into the TSBD with it. That's crap. Plus, it took a gunsmith one month to mount the scope on that rifle because the scope interfered with the bolt action on the rifle. Oswald wasn't a gunsmith and the FBI clearly stated the scope was not aligned properly.

So, in the immortal words of SNL...Suck it, Trebeck.

I have the exact rifle and scope Oswald supposedly used.

Yeah, sure you do.

I know that's what he MEANT. But that's not what he SAID, is it?

Well, I think it's a good idea for an LNer (like me) to occasionally remind people of what the ACTUAL EVIDENCE is in the JFK and Tippit cases, and to spell it out in black and white. And that "actual evidence" isn't going anywhere anytime soon. OSWALD'S rifle and the pictures of OSWALD holding the Kennedy murder weapon and OSWALD'S lies and the eyewitness testimony to OSWALD murdering J.D. Tippit are always going to be there. And it's important to remind people about all of that "Oswald" stuff every now and again---so that the CTers don't get the silly idea that their preposterous "Oswald Never Shot Anybody" theories are the only theories on the table when it comes to Internet discussions pertaining to the Kennedy and Tippit murders.