Since moving these "BOH" discussions over to the acj unmoderated side of the forum fence, the debates have grown very intense and way too personal in nature (regarding the invective we've been using). I apologize for my part in such mud-slinging. There's really no reason to do that.

Although, unless I'm mistaken and I don't think I am, I don't think I have ever once used the proverbial "K" word ["kook"] to describe you personally. Yes, I love to use that word on many of the conspiracy-thirsty nuts that populate this unmoderated acj newsgroup on a daily basis, but I try not to use that word when I'm talking to reasonable CTers or LNers (in general).

Yes, I think your BOH theories are, indeed, pure bullshit and nonsense, and I've said so very boldly. But it's your THEORIES that I've called "bullshit". I've tried not to get too personal, but I'm sorry to say that it has, in a way, gotten a little too personal. Of course, we couldn't get that personal even if we wanted to at the aaj board, because moderator John McAdams won't permit it.

Anyway, I just wanted to make the above statement. And I will make an effort to tone down the negative nature of any future Internet exchanges I have with John A. Canal. It might not be easy for me to do, but I will make that effort. :)

I recently added an interesting 1964 NBC-TV program to my JFK video collection. It's the 9/27/64 NBC program called "The Warren Commission Report", and I took note of something kind of strange---

While summarizing the evidence in the JFK case (and NBC did a very nice and succinct job of doing that, btw, in the limited time available during that 9/27/64 program), Robert MacNeil of NBC News shows us a hand-drawn diagram of JFK's head wounds [see the photo below], and the entry hole is placed fairly high on the head of the President: 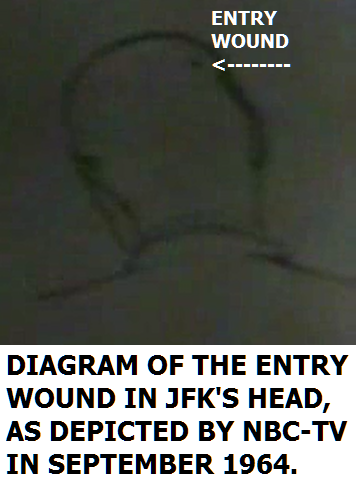 The diagram actually shows the entry wound from two different perspectives (a profile POV [which is not depicted above] and a directly from behind vantage point), with the "from behind" view depicting the entry hole in what looks to me like a VERY HIGH place on Kennedy's head. (The wound is shown too far to the right of the midline, but that's another story.)

But the profile view shows the entry hole to be a bit lower on JFK's head (with the President's head also leaning forward way too far, but, again, that's another argument entirely).

It could just be the angle, or maybe the illustrator of the sketch made an error somewhere, but I found it interesting that NBC-TV would be reporting that the entry wound in the back of President Kennedy's head was located fairly HIGH on his head (based on one of the views presented in that diagram anyway).

I have no idea where NBC would have arrived at any HIGH entry point (as of September '64). They certainly didn't get that kind of information from the autopsy report or the just-released Warren Report.

Anyhow, it's a very interesting NBC-TV program nonetheless, which can be seen below: