I want to say this publicly (as if anyone cares): Von Pein has shown me I was wrong.....

Yes indeed, Von Pein has shown me I was wrong. All along I thought he was of average intelligence and understood the obvious--that the HSCA's Baden had lied more times than you can shake a stick at, but that he only supported Baden's false, "NO-BOH-WOUND" and "COWLICK ENTRY" conclusions because he was just trying to be loyal.

Yes, I was wrong--I KNOW NOW THAT VON PEIN SUPPORTS BADEN'S CRAP BECAUSE HE'S AN IDIOT.

For example, he thinks an artifact could miraculously appear by accident on the AP x-ray:

2. precisely the same distance right of midline as the autopsists' entry (2.5 cm)...

4. and after the Navy Radiologist, Ebersole, admitted having possession of the x-rays (when only Chief Justice Warren was supposed to have access to them)...

Only a bonafied idiot would consider that scenario plausible....and Von Pein does exactly that.

Then, if there was a chance he was smarter than a rock, he says more to prove that he isn't. get this:

He thinks the near EOP entry was not problematic for those running the investigation (for the Warren Commission)....IOW, that low, near-EOP entry seemed to be nicely consistent with a shot from six floors up. Hmmmm, then why, I would ask Mr. Rock brain why, in WC Exhibit CE-388, they had to draw JFK leaning forward about 50 degrees WHEN HE WAS ACTUALLY (see Z-312) LEANING FORWARD ONLY ABOUT 27 DEGREES?????????????????????? 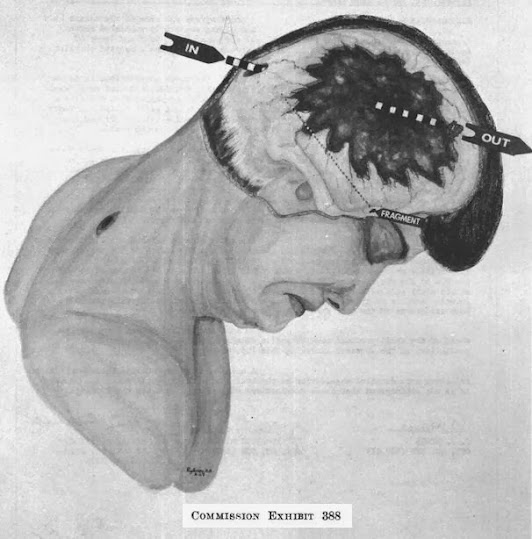 I've deleted his [DVP's] bullshit rhetoric, but when I offered the following explanation for why the 6.5 mm opacity was added to the AP x-ray, he laughed.

It's apparent, however, that Humes et. al. would not go along with any little plan to move the entry up---they weren't going to look like idiots who had been mistaken when they reported that low entry....thus, Humes stuck to his guns with his near-EOP entry and attempted to resolve the perceived problem (with that low, near-EOP entry not being consistent with a shot from six floors up) his own way. Indeed, he simply fudged, by almost double, JFK's lean forward in CE-388.

Now, again, Von Pein laughs at my explanation, but does he offer a more reasonable one? Of course not...he's too busy laughing for one thing and for another is so unfamiliar with the medical evidence (other than Bugliosi's going along with Baden's B/S), he can't come up with a reasonable alternative explanation.

BTW, if Humes had only realized that the bullet deformed and deflected up about 20 degrees as it penetrated the rear skull near the EOP, he could have drawn that bullet path and showed JFK's lean accuately in CE-388.

Of course, John cannot come even close to proving any of his ridiculous theories. But that never stops a good conspiracy theorist, does it now? And make no mistake, John Canal IS a conspiracy theorist. He thinks there were multiple "cover-up" operations in place in the aftermath of JFK's assassination. Hence, he is a "conspiracy theorist".


CANAL REPLAY (JUST FOR THE LAUGHS):

Someone ordered Ebersole to add the 6.5 mm opacity to the AP x-ray in the cowlick.

So, rather than merely rigging the hand-drawn CE388 diagram in some way to make it appear that an EOP entry wound could easily have created the large exit wound at the right/front of JFK's head, somebody decided it would be better to physically add in a "6.5 mm. opacity" to an existing X-ray of JFK's head. Is that about the size of the situation, Mr. Canal?

Rydberg could have easily drawn CE388 to meet all the necessary "EOP Entry" requirements (and without the ridiculously skewed "leaning forward" position of Kennedy's head in CE388). The bullet simply was deflected after entering JFK's head, with the bullet then changing course to exit where we know the bullet did exit -- at the Right/Front/Top of the head.

Heck, even John Canal thinks that DID occur, with the bullet deflecting upward to exit the Top/Right of the head. I wonder why Rydberg and the "6.5 mm. object planters" didn't think of doing that instead of planting an "object" onto an X-ray?

Were the "object planters" of the opinion (for some stupid reason) that Oswald's FMJ bullet could not POSSIBLY have changed course after entering JFK's head at full muzzle velocity of 2,165 fps?

The bullet, of course, could easily have deflected after striking the skull, and there's no possible way to know for sure how a bullet is going to behave after striking a hard object like Kennedy's head at full velocity. That bullet almost certainly was deflected to some extent, which CE388 does not depict at all, which is just plain silly.

Also --- John C., why do you continually ignore the following determination made by the Clark Panel in 1968 (re: the high point of entry in JFK's head)? Do you really think that ALL FOUR Clark Panel doctors would have signed a report that contained the following verbiage if they really ALL didn't believe it was the truth?:

"There is an elliptical penetrating wound of the scalp situated near the midline and high above the hairline. The position of this wound corresponds to the hole in the skull seen in the lateral X-ray film #2. .... On one of the lateral films [X-rays] of the skull (#2), a hole measuring approximately 8 mm. in diameter on the outer surface of the skull and as much as 20 mm. on the internal surface can be seen in profile approximately 100 mm. above the external occipital protuberance. The bone of the lower edge of the hole is depressed." -- Clark Panel Report