This whole thread is totally insignificant and meaningless, because it doesn't really matter WHERE Lee Oswald got the idea for using "Hidell" as one of his aliases....the fact remains we KNOW that he DID use that name (Alek James Hidell) as an alias on various documents, including a forged Selective Service card [pictured below] that not only has the name "Hidell" on it, but has Lee Oswald's OWN PICTURE on it as well (CE795)! 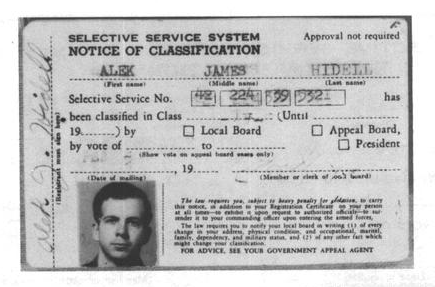 So anyone who claims (as some conspiracy nuts do still claim) that Oswald was telling the truth to the authorities after his arrest when he said he had never heard the name "Hidell" before, is just a silly person. Period.

As for Ben Holmes' contention that the Warren Commission "lied" about the details of any person with the REAL name of "A.J. Hidell" or "Hidell", Holmes (as usual) is totally nuts. Let's have another look:

Now, how is the above statement a lie? Answer--it isn't. Because no such person named "A.J. Hidell" (or "Alek James Hidell") is known to have existed as of the printing of the Warren Commission's Final Report in late 1964.

"During the summer of 1963, Oswald rented a post office box in New Orleans, listing the name "Hidell" in addition to his own name and that of his wife. Hidell was a favorite alias used by Oswald on a number of occasions. Diligent search has failed to reveal any person in Dallas or New Orleans by that name. It was merely a creation for his own purposes." (WR; Pages 644-645)

Now, yes, it's true that an acquaintance of Oswald's in the Marine Corps named John Rene Heindel said the following in a May 19, 1964, affidavit:

"While in the Marine Corps, I was often referred to as "Hidell"--pronounced so as to rhyme with "Rydell" rather than "Fidel." This was a nickname and not merely an inadvertent mispronounciation [sic]. It is possible that Oswald might have heard me being called by this name; indeed he may himself have called me "Hidell." However, I have no specific recollection of his either using or hearing this name."

But the fact that Heindel also used the nickname "Hidell" doesn't turn the following two statements made by the Warren Commission into "lies" (as Ben Holmes wants to turn them into):

"There is no evidence that an "A. J. Hidell" existed."

"Diligent search has failed to reveal any person in Dallas or New Orleans by that name [Hidell]. It was merely a creation for his [Oswald's] own purposes."

Therefore, it's pretty obvious that Kook Holmes is once again scraping the bottom of his "chaff" barrel and distorting and/or misrepresenting the Warren Commission's words when Ben insists that the WC "lied" when it came to being able to find a person in New Orleans or Dallas whose REAL NAME was "Hidell" (and more specifically "A.J. Hidell").

But the Warren Commission didn't lie, because there was no person in either of those two cities who had the REAL NAME of A.J. Hidell or Hidell.

But let's just assume that Ben Holmes is right (or at least partially right) about this chaff-like item of his that occupies space on his non-stop list of alleged "Warren Commission Lies". My next question would be -- So what?

John Heindel's WC affidavit is right there in Volume #8 of the Warren Commission volumes for everybody to see and read -- right here.

The Commission, therefore, wasn't HIDING Heindel's admission that he had a nickname that was exactly the same name as Lee Oswald's known alias ("Hidell"). It's right there in black-and-white on page 318 of Volume 8.

Does Ben Holmes think that this "Heindel"/"Hidell" coincidence really MEANS something in the long run? Is this supposed to "solve" the case in some way?

Does Ben think that Heindel and Oswald were part of an assassination "team" or something?

In short, WHERE exactly does the "Hidell" thing take Ben Holmes (and conspiracy theorists like him)?

Ben wants to think the Warren Commission lied when they claimed that nobody else in New Orleans or Dallas had the name (or used the name) Hidell.

But does the alleged "lie" somehow make all the evidence of Lee Oswald's guilt in the JFK and Tippit murders suddenly melt and/or disappear?

In my personal opinion, Ben Holmes does a good impersonation of James DiEugenio. Because both of those men are good at dredging up totally meaningless loose ends (aka: chaff) regarding unimportant matters concerning the assassination of John F. Kennedy. But neither man is very good at answering a very crucial question connected with their chaff-dredging:

WHERE DOES THIS CHAFF GO?