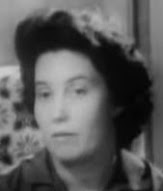 BOTH [Buell Wesley Frazier and Linnie Mae Randle] confirmed that the bag found on the sixth floor after the assassination generally looked like the bag they saw Lee Harvey Oswald carrying on 11/22/63.

A patent lie, David. So now we're resorting to a complete lie to make the case? Typical. They said the package was no more than two feet in length and carried with a cupped hand under the armpit.

Plus -- There's the fact that both the top and the bottom ends of the bag were quite possibly "folded" in some manner as Oswald carried the bag. At least the top of the bag was "folded", per Frazier. (See later discussion in this post regarding Wesley Frazier's November 22nd affidavit, which involves information concerning the bag's "folds".)

Also -- Randle, in her Warren Commission testimony, said that the bag she saw Oswald carrying was about "27 inches" long. And 27 inches is, of course (just like her "2-and-a-half feet" estimate from the movie "Four Days"), more than two feet, which makes your above statement of "no more than two feet in length" incorrect (with respect to the estimates of the bag's length made by Linnie Randle).

You might also be interested in the FBI Report filed by James Bookhout on 11/23/63, which states that Linnie Mae saw Oswald put "a long brown package, approximately 3 feet by 6 inches, in the back seat area" of her brother's Chevrolet sedan.

"3 feet" = 36 inches. The sixth-floor bag was 38 inches long. (And the lengthiest section of Lee Oswald's Italian-made Mannlicher-Carcano rifle was 34.8 inches long when it was broken down.)

So, who's telling lies now, Richard Van Noord? Or don't you even know what these witnesses said?

"I just roughly estimate and that would be around two feet, give and take [sic] a few inches."

Via Frazier's 11/22/63 affidavit, we find something interesting regarding the bag's length too:

"Before I got in the car, I glanced in the back seat, and saw a big sack. It must have been about 2 feet long, and the top of the sack was sort of folded up, and the rest of the sack had been kind of folded under. I asked Lee what was in the sack, and he said "curtain rods", and I remembered that he had told me the day before that he was going to bring some curtain rods."

The intriguing part of the above affidavit, IMO, is:

Therefore, Frazier is saying via his affidavit comments made on the very same day he saw Oswald with the paper bag that the "2-foot"-long bag had at least one of its ends "folded" in some fashion, which would certainly make the overall length of the bag longer when the bag is completely unfolded.

Frazier's other "folded" remark in his affidavit is a bit more ambiguous and hard to figure out.....

"And the rest of the sack had been kind of folded under."

But that could also explain why Frazier said that the full width of the bag looked too wide when he was shown the unfolded bag by the Warren Commission. If the WHOLE bag, for the most part, had been "folded under" itself in some fashion, then when Frazier saw Oswald with the bag on November 22, the bag would obviously have looked NOT AS WIDE in Frazier's eyes.

The above "folded" comments in Wes Frazier's November 22nd affidavit seem to have been overlooked by many conspiracy theorists who are bent on clearing dear, sweet Lee Harvey of the Presidential murder he so obviously committed with the object that was stuffed inside that paper bag (with multiple "folds") that he put in Frazier's car on the morning of November 22, 1963.

BTW, a man who is 5'9" tall can't fit a 27-inch object (or a 24-inch object) under his armpit while also cupping it in his hand (unless he's got monkeys for close relatives). So, the Randle/Frazier estimates as to the length of the package they saw are almost certainly wrong--even from a "conspiracy" POV.

In other words, Frazier can't possibly be exactly correct about BOTH things -- i.e., "under the armpit and cupped in his right hand" AND "roughly about two feet long" (via his WC testimony).*

Both of those things cannot be 100% true. But CTers like to think that Frazier's and Randle's bag-length estimates ARE, indeed, spot-on accurate.

Allow me to correct what I said earlier about a 5-foot-9 man not being able to wedge a 2-foot object under his armpit while cupping it in his hand at the same time. I'm just under 5-9, and I can ALMOST do it. It comes out to 23 inches on me. Ray Mitcham [on The Education Forum] said he's 5-9 and it came out to 24 inches on him (which I can, indeed, accept).

So even staunch CTers should admit that BOTH the famous "27-inch" measurement given by Linnie Randle AND the famous "armpit & cupped in the hand" scenario painted by Buell Frazier cannot BOTH be exactly accurate.

And I'm fully willing to eat some crow and say "I was wrong" when it comes to my earlier remark (from 2007), when I said a 24-inch object could not be wedged in the armpit by a 5-foot-9 man. That was, indeed, an incorrect statement (based on Ray Mitcham's test that he performed today [March 19, 2018]).

And isn't it funny that the empty 6th-Floor bag just happened to have the RIGHT PALMPRINT of Lee Oswald on it....perfectly matching the way Wes Frazier said Oswald carried the bag "cupped in his right hand".

The "under the armpit" observation of Frazier's was obviously a mistake....and he said so, under oath:

VINCENT BUGLIOSI (during the 1986 Docu-Trial in London) -- "Did you recall how he [LHO] was carrying the bag?"

BUELL WESLEY FRAZIER -- "Yes sir. He was carrying it parallel to his body."

BUGLIOSI -- "Okay, so he carried the bag right next to his body....on the right side?"

BUGLIOSI -- "Was it cupped in his hand and under his armpit? I think you've said that in the past."

BUGLIOSI -- "Mr. Frazier, is it true that you paid hardly any attention to this bag?"

BUGLIOSI -- "So the bag could have been protruding out in front of his body, and you wouldn't have been able to see it, is that correct?"

And now a passage from Vince Bugliosi's "Reclaiming History":

"Frazier's statements that the rifle was tucked under Oswald's armpit is hardly as definitive as the critics claim. While Frazier's description of how Oswald carried the rifle was consistent in all of his statements to investigators, it was clearly inferable from his Warren Commission testimony that this was only an assumption on his part based on his limited view.

"Frazier told the Commission that "the only time" he saw the way Oswald was carrying the package was from the back, and that all that was visible was "just a little strip [of the package] running down" along the inside of Oswald's arm. ....

"Since he could only see this small portion of the package under Oswald's right arm, and because he didn't notice any part of the package sticking above his right shoulder...Frazier assumed that it must have been tucked under his armpit, telling the Commission, "I don't see how you could have it anywhere other than under your armpit."

"Although the critics have been quick to embrace Frazier's conclusion, it should be repeated that he told the Commission over and over (no less than five separate times) that he didn't pay much attention to the package or to the way Oswald carried it. ....

"In other words, and understandably, Frazier was confused. So we don't even know, for sure, how Oswald was carrying the rifle in front of his body, which Frazier could not see. At the London trial [in 1986] I asked Frazier, "So the bag could have been protruding out in front of his body and you wouldn't have been able to see it?" and he responded, "That's true."

"The most likely scenario was postulated well by Dan Rather [of CBS News in 1967], who rhetorically told his audience, "You can decide whether Frazier, walking some fifty feet behind and, in his own words, not paying much attention, might have missed the few inches of the narrow end of such a package sticking up past Oswald's shoulder"." -- Vincent Bugliosi; Pages 409-410 of "Reclaiming History" (Via the Endnotes on CD-ROM)(c.2007)

"And BOTH [Randle/Frazier] confirmed that the bag found on the 6th Floor after the assassination generally looked like the bag they saw Oz carrying on 11/22."

.....wasn't referring to the exact LENGTH of the sixth-floor bag (quite obviously). I was referring to the TYPE and GENERAL LOOK of the brown paper bag (CE142) that was shown to Frazier and Randle by the Warren Commission.

Frazier, in his usual confused, odd, and hard-to-understand way of expressing himself, told the WC that the color of the bag Oswald carried closely matched the color of the replica bag made by the FBI for general identification purposes (CE364).

And Frazier said that the untreated and lighter portion of CE142 (the actual Sniper's-Nest bag) "could have been, and it couldn't have been" similar to the color of the bag he saw in the back seat of his car on the morning of November 22nd.

So, once again, we're forced to try and figure out some of Wesley Frazier's rather odd phraseology. But the words "could have been" are certainly in there. So use your proverbial grain of salt here, as we should do with all of Frazier's testimony to a certain extent, especially when he starts to talk in strange ways, which he often did in front of the Warren Commission.

Now, with respect to Linnie Mae Randle's testimony regarding the general look and color of the paper bag [at 2 H 249]:

JOE BALL -- "Looking at this part of the bag which has not been discolored, does that appear similar to the color of the bag you saw Lee carrying that morning?"

LINNIE MAE RANDLE -- "Yes; it is a heavy type of wrapping paper."

I'll offer up this common-sense question once again, because it's worth repeating numerous times:

I wonder what the odds are of Lee Oswald having carried a DIFFERENT brown bag into work from the one WITH HIS TWO IDENTIFIABLE PRINTS ON IT that was found by the cops in the Sniper's Nest on the 6th Floor?

Care to guess at what those odds might be? They must be close to "O.J. DNA" type numbers (in favor of the empty brown bag that was found by the police on the 6th Floor of the Book Depository being the very same bag that Buell Wesley Frazier and Linnie Mae Randle saw in Lee Harvey Oswald's hands on the morning of November 22, 1963).

I'm eagerly awaiting the logical and believable conspiracy-slanted explanation that will answer the question of why a 38-inch empty paper bag (which could house Oswald's 34.8-inch disassembled rifle [see the comparison photo below]), which was an empty bag with Oswald's fingerprints on it, was in the place where it was found after the assassination (the sixth-floor Sniper's Nest) and yet still NOT have Lee Oswald present at that sniper's window on 11/22/63.

I, for one, cannot think of a single "Oswald Is Innocent" explanation for that empty paper sack being where it was found after the assassination of John Kennedy....AND with Oswald's fingerprints on it. 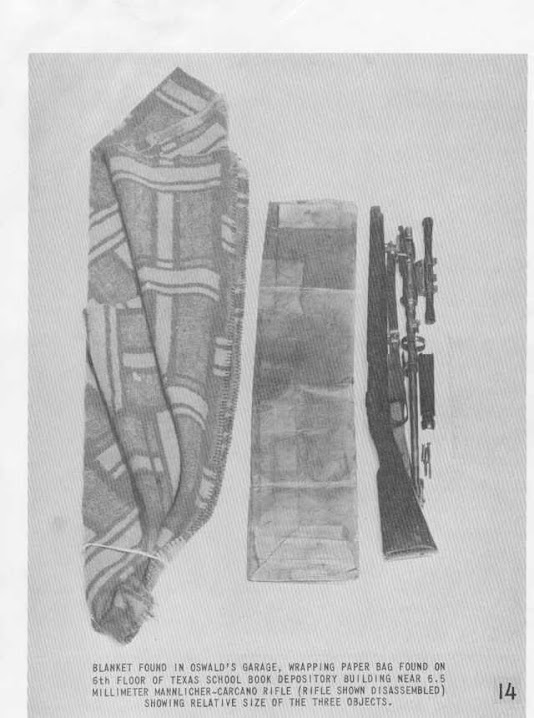 Oswald, His Rifle, And The Paper Bag