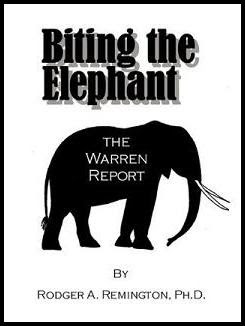 For the record, James DiEugenio (as usual) was 100% wrong in his "Black Op Radio" appearance of January 21, 2010, when he said that I had been writing things on the Internet about Rodger Remington's new book "Biting The Elephant".

But the fact is, prior to this post I'm writing right now, I have never ever said Word 1 about Remington's "Elephant" book.

Somebody apparently told DiEugenio that I had bought the book from Amazon.com and that I now was bashing the book on the Internet. That is totally untrue. And it's just one more time that DiEugenio has misrepresented me on Retard Radio.

I'd like to know who the lapdog is who is supplying DiEugenio with his information about me. I'm nearly certain it isn't DiEugenio himself who is making up these lies about me. He very likely gets them second-hand from somebody else.

But if it is, in fact, DiEugenio himself who is inventing the lies he has told about me on Black Op Radio, then James is a bigger kook than
I had originally thought (as well as being a totally disingenuous person), because the following statement made by DiEugenio concerning me is just a flat-out lie:

"I didn't know anything about this book. But it's on Amazon right now, called 'Biting The Elephant', and when I saw that David Von Pein had gone after it, I immediately ordered it, so I figured it must be a good book. .... The minute I saw Von Pein attacking the book, I ordered it."
-- James DiEugenio; January 21, 2010

The person who regularly reports to DiEugenio, whoever it is, must be some mixed-up kook, because he/she never seems to get anything right. He/she evidently e-mails DiEugenio about something I supposedly said, and Jimmy D. (naturally) believes everything the lapdog is telling him--including the latest lie about my having talked about Remington's new book on the Internet recently, which just simply has not happened, and anybody using the Search feature at the various forums can verify the fact that I've never uttered a word about that book prior to this post.

According to other conspiracy kooks, DiEugenio is supposed to be an outstanding researcher. And yet he takes virtually everything at face value when it comes to certain things that have been said about me, without bothering to check those facts for himself at all. And then he
has no hesitation whatsoever in repeating those untrue and unsubstantiated things on an Internet radio program.

And just think--ALL FOUR PEOPLE (besides me) who have listened to that 1/21/10 Black Op broadcast now probably believe that I have been bashing Mr. Remington's new book! ALL FOUR of them!

But thanks anyway, Gil [Jesus], for starting this thread. It provided a platform for me to once again set the record straight about the lies DiEugenio apparently enjoys spreading about me on Black Op Radio.

Von Pein must have deleted his review of "Biting The Elephant" as I don't see his review anymore. Typical tactic by the lone nut losers after they are exposed.

I never wrote a review for that book in the first place. It never existed, and DiEugenio never laid eyes on any review written by me for Rodger Remington's 2009 book "Biting The Elephant".

DiEugenio is either a liar or a dunce, as I've already told this aggregation in this very thread on January 25, 2010. Didn't you even read what I wrote in this thread, Al Kaline?

In the above February 4th Black Op program, conspiracy theorist James DiEugenio actually claims he SAW FOR HIMSELF a review written by me (DVP) on the webpage linked below for Mr. Remington's "Biting The Elephant" book:

As everyone can see, however, there is no review written by me on that page. And no, I did not "delete" any review from that webpage, as Al Kaline68 has suggested.

I have no idea why DiEugenio has a desire to tell these "Biting The Elephant" lies about me on two different Black Op Radio programs recently, but it goes to show one of two things:

1.) Jim DiEugenio is a dope who lacks the research skills to get his facts straight concerning a very simple matter -- i.e., identifying a certain review written by a certain person for a specific book.

There is no third option here.

As I said in an earlier post, this matter is very, very small and insignificant in the broad scheme of things associated with the JFK assassination (quite obviously), but it does bother me when I am accused of doing something (writing a review for a particular book) that I did not do.

And now, via the post written by "kaline68", I see that I'm going to have to face a secondary problem as a result of DiEugenio's blatant lie (or his idiocy by not getting his facts straight) -- and that is the problem of the kooks who will ALWAYS place their faith in the liar (in this instance, Jim DiEugenio) instead of believing the person who is telling the truth (in this case, David Von Pein).

Now that I think a little more about this little incident regarding Jim DiEugenio's lie that he decided to invent about me, it makes me realize what a truly difficult (even impossible) task it is for a person who has done nothing wrong and is telling the complete truth to be believed by certain people who have no desire to believe the truth at all.

A few good examples of this (on a much more important level relating to the JFK murder case) would be: Buell Wesley Frazier, Linnie Mae Randle, Roy Truly, Will Fritz, Arlen Specter, Earl Warren, Gerald Ford, Robert Frazier, and many other people who are accused of telling one lie after another by many conspiracy theorists of the world (James DiEugenio among them).

No matter what those witnesses and investigative officials say with respect to OSWALD HAVING BEEN GUILTY of murdering President John F. Kennedy and Officer J.D. Tippit, they simply will not be believed.

To certain conspiracy theorists, ALL of those people I just mentioned are evil liars and/or "cover-up" artists. With respect to Wesley Frazier and Linnie Randle specifically, I put their names on the above list due to the fact that Jim DiEugenio has recently decided (without a speck of evidence to support his beliefs) that both Frazier and Randle lied (or were coerced by the authorities into lying) when they each claimed to have seen Lee Harvey Oswald carrying a large paper bag on the morning of November 22, 1963.

Now, given the fact that DiEugenio seems to firmly believe that Oswald carried NO LARGE PAPER BAG AT ALL to work with him on 11/22/63, I'm guessing that there is virtually NOTHING on God's green Earth that will sway Jim away from his silly recently-acquired belief that LHO
had no large bag with him at all as he left Ruth Paine's house on the morning of the assassination.

Similarly, it just dawned on me (after reading the post written by "kaline68" in this thread) that it will probably be totally futile on my part to attempt to defend myself against James DiEugenio's little lie that he (for whatever reason) decided to tell about me on Black Op Radio on both January 21, 2010, and February 4, 2010.

An untrue accusation is like gum on your shoe....it's a hard thing to get rid of.