LEE HARVEY OSWALD, HIS RIFLE,
AND THE PAPER BAG

1.) LEE HARVEY OSWALD'S RIFLE was found on the sixth floor of the Texas School Book Depository Building on 11/22/63.

2.) An EMPTY 38-INCH-LONG PAPER BAG with two of Oswald's prints on it was found under the same window from where OSWALD'S RIFLE positively fired three bullets at President Kennedy.

3.) The lengthiest part of OSWALD'S RIFLE, when broken down, was 34.8 inches. So it could definitely fit inside the 38-inch PAPER BAG found near the sniper's window.

5.) Oswald lied about the contents of that PAPER BAG to fellow worker Buell Wesley Frazier.

6.) Oswald also lied when he told the police he did not carry any kind of a large PAPER BAG into the Depository Building on November 22nd.

7.) Oswald also lied when he told the police that he had not recently said anything at all to fellow worker Buell Wesley Frazier about "curtain rods".

8.) Following the President's assassination, no curtain rods were discovered in the Book Depository [see Commission Exhibit 2640].

9.) OSWALD'S RIFLE was not found in its known storage location (Ruth Paine's garage in Irving, Texas) on the afternoon of November 22nd. Lee Oswald, of course, spent the previous night (Nov. 21) at the Paine house, and had easy access to the garage where he knew his rifle was being stored.

When a reasonable and sensible person adds up #1 through #10 above, the answer becomes quite obvious. In fact, the answer couldn't be more obvious -- Lee Oswald wrapped his own rifle in a handmade 38-inch brown paper bag and carried that paper package containing his rifle out of the Paine residence on the morning of November 22, 1963.

Lee H. Oswald then took that rifle package into his workplace at the TSBD, unwrapped the rifle in private at some point prior to 12:30 PM, assembled his rifle (which is reasonable to assume he knew how to do without much difficulty or painstaking effort), secreted himself as best he could in the southeast corner of the sixth floor (aided by the shield of book cartons that Oswald himself had fashioned that same morning), and shot and killed JFK when he drove down Elm Street at 12:30 PM.

For goodness sake, this is second-grade math we're dealing with here concerning the rifle and the bag. ANY other explanation regarding those two objects is laughable when compared to the scenario I just laid out above.

Any alternate scenario must explain away many different things -- things that all FIT TOGETHER like a well-fitting glove via the 10-point scenario I talked about above -- such as:

1.) The need to explain away the FACT that Oswald's rifle was missing from its known storage location on the same day the President was killed via rifle fire that came from the same building where Lee Oswald worked and from where three bullets from OSWALD'S RIFLE were fired (via the three spent shells from OSWALD'S RIFLE found under the sniper's window [CE510]).

2.) If Lee Harvey Oswald didn't take his rifle to work in that large-ish paper bag on 11/22/63, then when did he (or somebody else) take Mannlicher-Carcano rifle #C2766 into the Book Depository?

Prior to November 21, the last time Oswald was at Ruth Paine's house was the weekend of November 8-11, 1963, which was more than one full week before the President's motorcade route through Dallas was even finalized or announced in the Dallas papers.

The earliest that Oswald could have known for sure that his workplace would be a good and viable location for attempting to assassinate President Kennedy was Tuesday morning, November 19th, when the details of the motorcade route (including the Houston-to-Elm turn that would take JFK's limousine directly in front of the TSBD) were printed in the Dallas Morning News [see CE1363].

It stands to reason, therefore, that Oswald probably did not remove his rifle from Ruth Paine's garage prior to 11/19/63. And the only possible dates after November 19th that he could have conceivably retrieved his rifle from that location in Irving, Texas, were November 21 and 22.

3.) Conspiracy theorists also need to somehow explain away the devastatingly incriminating evidence against Lee Oswald known as CE142 (the EMPTY paper bag that was found in the Sniper's Nest with two of Oswald's prints on it).

Most conspiracists like to cry foul when discussing that brown paper sack, claiming that the police were up to no good and created a fake bag in order to frame Oswald with it. But such arguments fall short in the "proof it happened" department. Way short.

But it's obvious why CTers feel the need to distance themselves from the reality of that paper bag. Because if those conspiracy believers were to actually face the stubborn reality concerning the bag (with that reality being: It was Oswald's homemade bag and Oswald took his rifle to work in that bag), then those CTers would be forced to admit that their precious "patsy" had probably taken that gun to work in order to shoot somebody with it on the day when JFK came to town.

What other reasonable and logical conclusion could anyone (CTer or otherwise) come to after they've admitted to themselves the obvious truth: That Lee Oswald did, in fact, walk into the Book Depository on November 22, 1963, with a rifle wrapped in brown paper?

4.) Another pesky item that conspiracists need to "explain away" is the "curtain rod" lie that was told by Lee Harvey Oswald. And it couldn't be more obvious (to a reasonable and rational person, that is) that Oswald DID, indeed, lie to Wesley Frazier (and later to the police after he was arrested) concerning the curtain rods. Oswald never had any curtain rods, of course.

And why on Earth would Oswald want to lie about the contents of that brown paper package? Again, the answer couldn't be more obvious: He wanted to DISTANCE HIMSELF FROM THE MURDER WEAPON.

5.) And two other pieces of evidence that conspiracy advocates must avoid or twist or mangle are the fingerprint and the palmprint of Oswald's that were found on the paper bag.

How did Oswald's prints get on that paper bag IF OSWALD HIMSELF WAS NEVER IN POSSESSION OF THAT BAG ON THE DAY OF THE ASSASSINATION?

That's a question that no conspiracy theorist has ever been able to reconcile with anything close to a believable or satisfactory answer since 1963. And yet we've got certain conspiracists like James DiEugenio who now want to say that Oswald didn't carry ANY large bag into the TSBD on November 22. None at all!

Well, Jim, I've got a really good one-word response to such lunacy -- Hogwash!!

All conspiracy theorists who love to argue about whether Lee Harvey Oswald took his rifle into the TSBD on the morning of the assassination certainly have to realize (deep down) that the above 10-item scenario is 100% accurate and based on the actual evidence in the JFK case (not to mention being based on a whole lot of ordinary common sense as well).

But it seems that conspiracy promoters just love to argue....even when they must certainly know in their own guts that their arguments are filled with mush when compared with the actual truth.

Vincent Bugliosi said it quite well (as usual) when he said this to the jury in London, England, in 1986 during the televised docu-trial, "ON TRIAL: LEE HARVEY OSWALD":

"We...know from the firearms people that the three expended cartridge casings found on the floor, right beneath that sixth-floor window--undoubtedly the same casings that Mr. [Harold] Norman heard fall from above--were fired in, and ejected from, Oswald's rifle to the exclusion of all other weapons.

"So we KNOW, not just beyond a reasonable doubt, we know beyond ALL doubt that OSWALD'S RIFLE WAS THE MURDER WEAPON....that caused that terrible, terrible spray of brain matter to the front! The worst sight that I have ever seen in my entire life!

"And it's obvious that Oswald carried that rifle into the building that day in that large brown paper bag. It couldn't be more obvious. As far as Mr. [Wesley] Frazier's testimony about Oswald carrying the bag under his armpit, he conceded he never paid close attention to just how Oswald was carrying that bag. He didn't have any reason to.

"At this point if we had nothing else....nothing else!....how much do you need?!....if we had NOTHING else!....this would be enough to prove Oswald's guilt beyond all REASONABLE doubt. But there's so much more." -- Vincent Bugliosi; July 1986


There are many reasons to conclude that the bag held by L.D. Montgomery in these pictures is NOT a "fake" or "DPD manufactured" bag:

1.) Multiple officers (Studebaker, Day, Montgomery, and Johnson) said they saw a long bag in the Sniper's Nest prior to it being picked up off of the floor.

2.) DPD Lieutenant J.C. Day wrote his name and the date on the bag shortly after it was found.

3.) Two of Lee Harvey Oswald's prints are on the paper bag in evidence today at the National Archives (Commission Exhibit No. 142). How and when did the cops manage to "plant" those prints of LHO's on the bag? The conspiracy theorists never tell us this, of course. They merely ASSUME the evil cops planted the fingerprint and palmprint on the bag.

4.) At the time when Montgomery was photographed carrying the bag out of the Book Depository (below), which was sometime during the afternoon of 11/22/63, the Dallas Police Department very likely didn't even have a clue that a long brown paper bag could be associated in any way with the evidence surrounding President Kennedy's assassination. Buell Wesley Frazier and Linnie Mae Randle were the only two people on the planet who could have supplied the information to the DPD about Oswald carrying a long brown bag that morning.

Now that's some really fast work being done by the DPD with that bag (if we're to believe what Pat Speer and others seem to believe). The cops would have had to create that bag very quickly on the afternoon of the assassination. And they probably would have needed to do that PRIOR to ever confirming from Frazier or Randle that Oswald had a bag with him that day.

There are conspiracy clowns (such as Jim DiEugenio) who conveniently maneuver around that last sticky little timeline problem by making the preposterous claim that both Wes Frazier and Linnie Randle just MADE UP the paper bag story from whole cloth (after being forced to do so by the evil DPD). Of course, such nutty allegations belong in a fantasy book, not in a reasonable discussion about the evidence in this case. 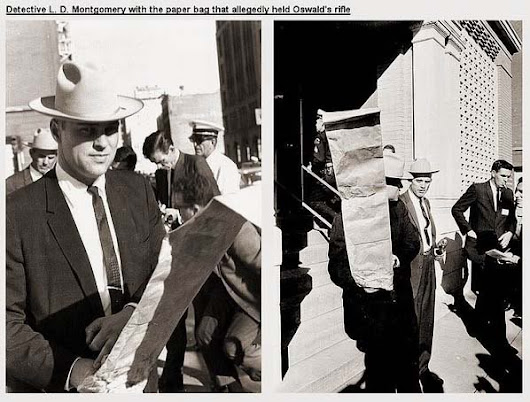 Pat Speer and other conspiracists think the bag seen in Detective Montgomery's hands in the pictures above does not match the dimensions and other characteristics (such as the "wrinkling" and "crinkling") of CE142, which is the bag that is in evidence today that is said to have been the exact same paper bag being held by L.D. Montgomery above.

But many times when examining photographs and films, lots of things don't "look quite right". This same argument has been made by conspiracy theorists about the backyard photos of Oswald. And JFK's autopsy pictures. And the Zapruder Film. And Mary Moorman's photo. And on and on.

But, as Dale Myers has said many times in the past (such as in this article), attempting to extract precise (and three-dimensional) information by looking at two-dimensional photographs is a fool's errand. It simply cannot be done with 100% accuracy and precision.

Given the built-in obstacles and limitations when it comes to the task of attempting to "match up" 2D pictures with one another, plus the list of items I mentioned above, to say that the Dallas police created a fake paper bag in order to try and frame Lee Harvey Oswald for President John F. Kennedy's murder is, in my opinion, not a reasonable (or logical) conclusion to reach.