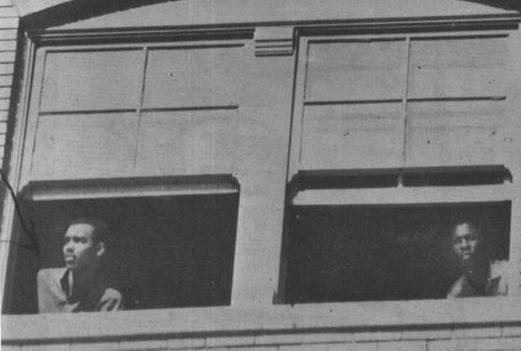 "Just after the President passed by, I heard a shot and several seconds later I heard two more shots. I knew that the shots had come from directly above me, and I could hear the expended cartridges fall to the floor. I also could here the bolt action of the rifle. I saw some dust fall from the ceiling of the fifth floor and I felt sure that whoever had fired the shots was directly above me."

When President Kennedy was assassinated in Dallas, Texas, on November 22, 1963, 25-year-old Harold Norman was located on the fifth floor of the Texas School Book Depository Building. He was situated directly underneath the sixth-floor "Sniper's Nest" window when rifle shots were being fired at JFK from that sixth-floor window.

Does anyone truly think that Norman was making up a false story when he claimed to hear a rifle's bolt being worked directly over his head?

And do conspiracy theorists also think that Norman lied when he said he heard exactly "three" shots being fired over his head?

And did he also lie when he said he heard "three" bullet shells (or "hulls") hitting the floor above him?

Harold Norman's testimony in each of the above "three shots" regards provides an additional (and, IMO, very important) layer of evidence leading toward Lee Harvey Oswald's guilt in the murder of President Kennedy (coupled with all the other ballistics, witness, fingerprint, and fiber evidence that back up LHO's guilt as well).

Because if Norman was dead wrong about everything he heard going on directly above his 5th-Floor location within the Book Depository, it would certainly be an incredible coincidence that he would be WRONG, but in such a "THREE SHOTS WERE FIRED FROM THE SIXTH FLOOR" fashion....which is a scenario that is backed up by lots of other evidence (and witnesses), besides just Mr. Norman.

And if conspiracists want to paint Norman as yet another in a series of "liars" or "Warren Commission shills" after the assassination, it only adds one more ludicrous and unproven "He Was Lying" allegation to the already silly length of such a list that has been created by some conspiracy theorists over the years since 1963.

And it's interesting to note in the Warren Report, that all seven Warren Commissioners (via three separate re-creations of bullet shells hitting the floor above Norman's position on the Depository's fifth floor) were each easily able to hear the cartridge cases hitting the floor.

"All seven of the Commissioners clearly heard the shells drop to the floor." -- Warren Report; Page 71

In addition, there's also the test that was conducted by Warren Commission counsel member David W. Belin. To quote Belin directly on this matter:

"We scheduled the testimony of Harold Norman on March 24, 1964. Before he testified, we wanted to interview him on the fifth floor of the TSBD Building and check whether these sounds [of the rifle shells hitting the floor and of the rifle's bolt being worked by the gunman] could be heard.

"We had with us the equipment necessary to make the test. A Secret Service agent with the bolt action rifle stood with Joe Ball in the southeast corner window on the sixth floor of the TSBD Building. I stayed with Harold Norman on the fifth floor directly below.

"Before giving the signal to conduct the experiment, I waited until a train passed on the nearby railroad overpass so there would be plenty of street noise. In addition, at that time, several large trucks were moving down Elm Street. I then yelled to have the test begin.

"I smiled, for I really did not expect to hear anything. Then, with remarkable clarity, I could hear the thump as a cartridge case hit the floor. There were two more thumps as the two other cartridge cases hit the floor above me.

"The Secret Service agent then worked the bolt of the rifle back and forth, and this too could be heard with clarity.

"When we re-assembled after the re-enactment, I said to my colleague, 'Joe, if I had not heard it myself, I would never have believed it'."

Now, either Harold Norman was an amazing liar, or somebody fired three shots from just above Norman's 5th-Floor Depository position on 11/22/63 (with three shells hitting the floor too).

And Norman confirmed he did hear precisely THREE shells/("hulls") hitting the plywood floor directly above him during the shooting. He confirmed this fact in 1986 when he was being questioned about the matter by lawyer Vincent Bugliosi during the television docu-trial "On Trial: Lee Harvey Oswald".

Here is some of the verbatim testimony given by Harold Norman at that mock trial in 1986 (which can also be seen in the video presented below):

VINCENT BUGLIOSI -- "So you heard a total of three shots?"

MR. BUGLIOSI -- "Did it sound to you like a rifle was being fired directly above you?"

MR. BUGLIOSI -- "Was there any OTHER reason, in addition to the sound of the rifle, any other reason why you believed the shots were coming from directly above you?"

MR. BUGLIOSI -- "You're familiar with a bolt-action rifle?"

MR. BUGLIOSI -- "And by 'hulls', you mean cartridge casings?"

MR. BUGLIOSI -- "How many did you hear falling to the floor?"

MR. BUGLIOSI -- "Is the sound of that bolt action, and the ejection of the cartridge casings, and their falling to the floor something that you're going to remember for the rest of your life?"

MR. BUGLIOSI -- "One more question....at any time on the morning of the assassination did you see any stranger or strangers in the Book Depository Building?"

Do some CTers think that the plotters had a guy standing in the Sniper's Nest dropping shells to the floor IN REAL TIME during the actual eight seconds when the assassination was taking place on November 22nd?

Now THAT'S Patsy-Framing organization and efficiency, for damn sure! :)

So, if Norman's not a liar (and there's absolutely no reason to think he is), then three shots WERE definitely fired from that southeast corner window of the Book Depository's sixth floor. Period. Which is something that very few conspiracy theorists I've ever talked to actually believe occurred that day.

And Harold Norman's testimony, all by itself, makes conspiracy theorist Robert Groden's crazy "No Shots Were Likely Fired From The SN Window At All" theory look even more ludicrous than it already is. (And it's pretty ludicrous to begin with.)