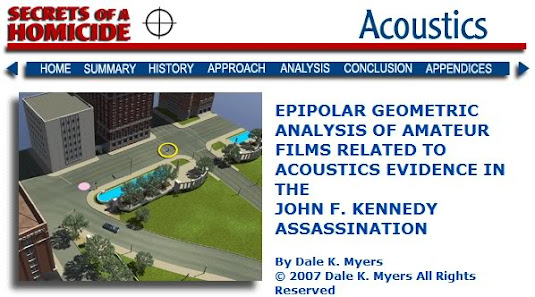 In 2003, Robert Blakey, former chief counsel and director of the House Select Committee On Assassinations, said this:

"If you could prove to me that there was no police
officer in the place where he had to be, you would
falsify [the acoustics evidence]." -- G. Robert Blakey

In fact, it's very easy to debunk the HSCA's "4th Shot" acoustics
evidence by watching just the Robert Hughes film all by itself.

And that's because it couldn't be more obvious via the Hughes film
that there is not going to be a police motorcycle in the area near the
intersection of Elm and Houston Streets by the time the first shot
occurs, which the HSCA said was fired at about Zapruder Frame
#157 [HSCA Final Report; Page 47].

Robert Hughes' November 22 filmmaking vantage point (looking due
north from the corner of Main and Houston Streets) is ideal for
determining whether a police motorcycle was (or could have been)
near the intersection of Elm and Houston Streets at the time when
the HSCA said it was essential for a cycle to be located there.

The Hughes film can be viewed below [and here as well]. There's
not a police motorcycle to be seen on Houston Street at the critical
moments in question when the HSCA needed a cycle near the corner
of Elm and Houston:

The Hughes film follows the President's car as it turns the corner at
Elm and Houston. This would be only a matter of a few seconds
before the first shot was fired, per the HSCA analysis. And we can
even see JFK's limo completely disappear from view around the Elm
corner before Hughes stops filming momentarily.

THERE IS NO MOTORCYCLE ANYWHERE NEAR THE CORNER OF ELM
AND HOUSTON AT THIS CRITICAL POINT IN TIME ON THE HUGHES
FILM. (Unless we want to count the two motorcycles which are flanking
the left side of the Secret Service follow-up car. But these cycles are
certainly ruled out as potential candidates for having the stuck-open
microphone, because they were both a significant distance WEST of
the Elm/Houston intersection at the time of the first gunshot.)

Nor, for that matter, is there any motorcycle visible on Houston Street
AT ALL in the Hughes film in the crucial seconds after President Kennedy's
car has made its turn onto Elm.

Moreover, it's not until a few seconds AFTER Kennedy's limo turns the
corner onto Elm that we get our first glimpse of Officer H.B. McLain,
as he comes into Hughes' view in the foreground (with McLain having
just then started his turn from Main onto Houston). And it was McLain
who was supposed to be very near the Elm corner at the time of the
first shot, according to the HSCA.

Here's a very important freeze-frame image from the Hughes film: 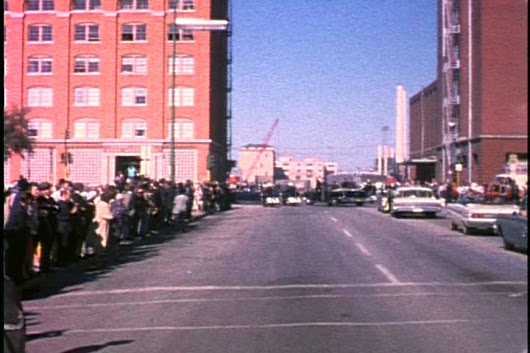 The President's limousine has nearly completed its left-hand turn onto
Elm Street in the above photo. The Secret Service follow-up car is in
the middle of its turn, right behind JFK's vehicle. And there's not a
motorcycle in sight on Houston Street, and it's only a very few seconds
before the first gunshot was fired in Dealey Plaza.

Another still frame from Hughes' home movie is shown below. Slightly
more than two seconds have elapsed between the still frame shown
above and this one here, and there's still no police motorcycle to be
seen on Houston Street: 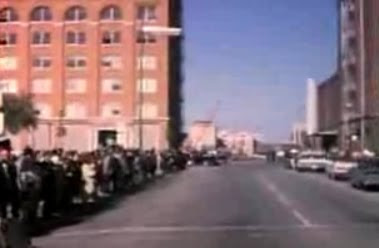 The above still frame is very close to the last frame of motion-picture
film that was exposed through Robert Hughes' camera before he stopped
filming for a very short period of time.

Hughes probably stopped his camera for just a couple of seconds after
JFK's limousine had disappeared from his sight, but that fact is another
important time element to consider when evaluating the acoustics subject,
because it means that President Kennedy's car was even further down
Elm Street by the time Hughes started filming again. And Officer McLain
doesn't enter Hughes' field of vision until exactly one second after Hughes
begins filming again.

So, while it's very nice, indeed, that Dale Myers has taken the time
and effort to synchronize all of the various films together (to prove
beyond any and all doubt that no motorcycle was near the Elm corner
when the HSCA needed the policeman's open microphone there), I think
it's fairly obvious that pretty much the very same acoustical debunking
can be achieved by watching JUST the Robert Hughes film.