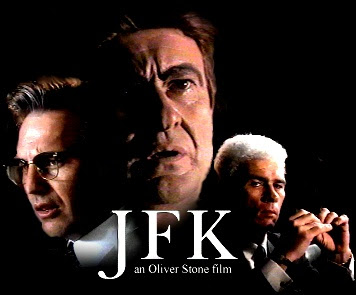 >>> "[Oliver] Stone instead created a counter-myth, using evidence culled from the Warren Commission's 26 volumes and the Jim Garrison investigation of Clay Shaw." <<<

Exactly, Pat. Oliver's movie is a "myth", plain and simple. It's not the "counter-myth" that I've heard Mr. Stone speak of, however....and that's because the Warren Commission Report is not a "myth" in any fashion whatsoever. That's the "CTer" in you talking (and the one in Mr. Stone too).

The WCR is based on the HARD EVIDENCE of Oswald's lone guilt in the two murders LHO committed in 1963 (JFK's & Tippit's). Vince Bugliosi said it as succinctly and accurately as anyone possibly could when he said: "Any denial of Oswald's guilt is not worthy of serious discussion". Truer words never passed human lips.

BTW, Stone's movie is HARDLY "culled from the Warren Commission's 26 volumes". There's virtually nothing of a factual, WC-based nature in that film. As VB said, when you're 0-for-53, that's hardly worthy of any praise at all. You should be benched for the rest of the season with a .000 average like that! It's idiotic!

Yeah, just let the gullible public watch the movie and decide, right? (All the while going "0-for-53" in the "Factual Data" department. Pathetic.)


>>> "The American people, not to mention the U.S. House of Representatives, had already decisively REJECTED the Warren Report, and Stone was simply offering an alternative scenario." <<<

Which is an alternative scenario without a shred of validity to it. Not to mention an alternate "Patsy" scenario that is laughable from even a conspiracy POV -- i.e., how on Earth are the conspirators supposed to be able to successfully frame their lone patsy if they shoot JFK with 6 shots and from THREE SEPARATE LOCATIONS?! It's almost as preposterous as David Lifton's "body-altering" nonsense.

To continue with my baseball analogy (since I already started one earlier) -- If Oliver Stone, instead of making a film about Kennedy's murder, had made a movie about the 1960 World Series (a true-life event with only one FACTUAL outcome, based on "Baseball Evidence", such as "runs, hits, and errors")....would it be proper for Mr. Stone to play around with the outcome of the final game, where Bill Mazeroski swats his dramatic Series-winning home run in Pittsburgh?

In such a film, should perhaps Stone consider altering the ending of that World Series, by having Yogi Berra climbing the left-field fence and snaring Maz's long drive? And then the Yankees could go on and win the Series, instead of the Pirates.

Maybe that's not a spot-on perfect analogy, but perhaps somebody will get my point there. Mr. Stone deliberately skewed the KNOWN, HARD FACTS IN EVIDENCE re the JFK assassination in his 1991 movie. And everybody should be made aware of the MANY things Stone intentionally twisted in that film...things that he damn well COULD have portrayed accurately.

One good example being the deplorable re-enactment of the J.D. Tippit murder, which Stone (and Jim Garrison too, per his nutty theories) has committed (naturally) by someone other than Lee Harvey Oswald. There's nothing about the murder of Tippit that is correct in the film, including the scene where we see Oswald still wearing his jacket as he was seen by Johnny Brewer on Jefferson Boulevard, even though Brewer testified in 1964 that Oswald was not wearing any jacket at all when Brewer saw LHO on the afternoon of 11/22/63 [7 H 3].

That detail about Oswald's jacket is a small thing, but it's just one more inaccuracy (among over 100) in Stone's movie.

Shouldn't at least a FEW of the known facts come to light in a movie about John Kennedy's REAL MURDER? If not...why the hell not?


>>> "It clearly drives Bugliosi bonkers that so many prefer Stone's scenario to his own." <<<

Damn right it does. It drives me bonkers too. Has for years. Especially when I see young people (who only know of the JFK case by way of that singular source of Stone's incredibly inaccurate motion picture) prop up that movie as the Holy Grail of "truth" with respect to the way JFK met his Maker. That type of reaction to the nonsense we see in Stone's film is more than enough reason, all by itself, for Mr. Bugliosi to spend many, many pages in his book tearing down the so-called "Counter-Myth" known as "Oliver Stone's JFK".