Upon re-listening to James DiEugenio's Black Op Radio appearance from
December 11, 2008, I found several additional hunks of deception, mangling,
misrepresentation, and evidence distortion on DiEugenio's part that I
had not previously noted in my December 2008 critique of that particular
Black Op program.

It seems as though the more I listen to a conspiracy theorist like
DiEugenio (who can ramble on and on for hours about how everything
under the sun was miraculously and perfectly synched and wired into
his make-believe "JFK Conspiracy And Cover-Up"), the more and more
bullshit I find in Jim's rantings.

1.) DiEugenio had the immense gall to accuse Dr. Russell Fisher (who
was one of the four members of the 1968 Clark Panel) of performing
some "magic" [DiEugenio's word] with respect to the location of the
entry wound in the back of President Kennedy's head.

According to DiEugenio (who apparently considers it his duty to make
up shit as he goes along, without a scrap of solid evidence to support
the accusations he makes, other than his very fertile imagination),
Dr. Fisher "takes care of this problem" [DiEugenio; 12/11/08] with
respect to the location of the entrance wound in JFK's head when "he
[Fisher] just simply moves the wound in the back of the skull up four
inches" [DiEugenio; 12/11/08].

But what DiEugenio fails to then talk about is the AUTOPSY PHOTO of
the back of Kennedy's head (shown below), which positively
CORROBORATES the so-called "magic" that Fisher just performed:

It couldn't be more obvious that the ONLY thing that looks remotely
like a "bullet hole" in the above picture is the red spot near the
cowlick (which is a location that is almost exactly 4 inches above the
EOP of Kennedy's head, which also just happens to perfectly
correspond, per the Clark Panel and the HSCA, with the location of the
entry wound as seen in the lateral X-ray of JFK's head).

So, unless Mr. DiEugenio wants to believe that Dr. Fisher and his
three cohorts on the Clark Panel were THEMSELVES involved in some kind
of clandestine project to FAKE the autopsy photos and X-rays,
DiEugenio doesn't have a leg to stand on when he accuses Fisher of
performing some "magic" with respect to the location of the entry
wound in JFK's head.

And the above paragraph is true because Fisher was merely basing his
conclusion about the "cowlick" entry location on the original photos
and X-rays of President Kennedy's head, with Fisher (and the Clark
Panel as a whole) coming to the only possible logical conclusion that
anyone could come to after evaluating the photographic evidence --
which is: the entry hole in JFK's head was located high on the head
near the cowlick.

WHAT IS JOHN STRINGER'S CAMERA "CENTERING" ON?

2.) Like all rabid conspiracy theorists always do, James DiEugenio
wants to think that autopsy physician Dr. J. Thornton Boswell was part
of the "cover-up" plot to hide the truth about JFK's wounds too, with
DiEugenio citing the hand-drawn "dot" on Boswell's autopsy face sheet
as proof that Kennedy's upper-back wound was located in an area that
totally destroys the validity of the Single-Bullet Theory.

But, as usual, DiEugenio doesn't tell the Black Op audience about the
fact that Boswell also included detailed measurements regarding the
wound's location in the margin of the face sheet (below):

Naturally, though, DiEugenio thinks that the non-exacting "dot" on the
face sheet is a MUCH better measuring device than are the detailed
"14cm. from the tip of the right mastoid process" measurements that
were written in by Dr. Boswell on the VERY SAME FACE SHEET.

3.) DiEugenio also enjoys propping up the fact that no probes could be
successfully put through President Kennedy's body during the Bethesda
autopsy on 11/22/63. And this is supposed to prove that the SBT is a
wet dream of lone-assassin proponents.

But Mr. DiEugenio never ONCE bothers to ask himself this question when
focusing on the "probing" issue:

I wonder if there could possibly be an alternate explanation
(other than the explanation of a bullet coming to a stop after going
into JFK's body just a few inches) to reconcile the fact that the
probes would not go through JFK's upper-back wound at his autopsy?

And, of course, there is, indeed, a very logical and reasonable
"alternate explanation"....and it's an explanation that James
DiEugenio should already be aware of (and he probably is aware of it).
It's this explanation given on the ARRB record in 1996 by Dr. Boswell:

"We probed this hole which was in his neck with all sorts of probes and everything, and it was such a small hole, basically, and the muscles were so big and strong and had closed the hole and you couldn't get a finger or a probe through it." -- Dr. J.Thornton Boswell; February 26, 1996; Page 75 of ARRB Testimony

But, implacably, Mr. DiEugenio (who probably sees conspirators in his
sleep every night) wants to believe that the ONLY possible explanation
for the unsuccessful probing of JFK's back wound is because the wound
was not a through-and-through wound at all, despite the above ARRB
testimony offered up by one of the doctors who performed the
President's post-mortem examination.

Which, of course, given such a belief, means that DiEugenio is now
also forced to believe something far sillier than the Single-Bullet
Theory -- he's forced to believe that not just ONE bullet struck the
soft tissues of JFK's upper body in Dallas' Dealey Plaza and totally
disappeared without a trace (while leaving behind absolutely no
substantial visible damage in JFK's body whatsoever)....Jim D. must
believe that TWO separate bullets (coming from two different
directions) hit JFK in the upper back and throat, with neither missile
exiting Kennedy's body. And then, to top off this cartoonish scenario,
BOTH of those bullets vanish off the planet.

And yet THAT'S the type of two-bullet nonsense that a conspiracist
like Mr. DiEugenio apparently thinks is much more logical and
believable than the SBT.

If we fast-forward to two different DiEugenio Black Op Radio
appearances in July 2009 and September 2009, we'll find additional
things to rake James D. over the coals about -- such as:

Jim's belief that FBI Director J. Edgar Hoover would have actually
wanted to FRAME AN INNOCENT LEE HARVEY OSWALD as the lone killer of
President Kennedy!

That particular idea is just crazy, IMO. And it's crazy mainly because
Hoover loved his Bureau, and he certainly didn't relish the idea of
having his FBI being blamed (even partly) for having not kept a better
eye on the person who assassinated the President of the United States.

And since Hoover knew that the Dallas FBI office (and agent James
Hosty) knew about Lee Oswald being in Dallas in the weeks leading up
to the assassination, the idea of Hoover becoming involved in a post-
assassination cover-up operation that would (per many conspiracy
theorists) falsely implicate a totally-innocent man named Oswald for
the murder of JFK is a theory that I wouldn't swallow in a million
years.

IMO, it's much more likely that J. Edgar Hoover would have been trying
desperately to CLEAR Oswald's name after the assassination of the
President (and, hence, clear Hoover's own FBI of any perceived
negligence in the eyes of the public), rather than attempting to frame
the very man that Hoover's FBI boys should possibly have been watching
more closely prior to November 22nd.

Does DiEugenio think that Hoover WANTED to stain his very own Bureau
with a black eye that would probably never heal by accusing an
innocent Lee H. Oswald of killing John F. Kennedy and J.D. Tippit?
That's nuts.

The bottom line is this --- J. Edgar Hoover was no more involved in an
after-the-assassination "cover-up" than Jim DiEugenio or I were.

How can we know this to be true?:

Because the man whom J. Edgar Hoover was convinced murdered President
Kennedy WAS, indeed, the man who murdered JFK in Dallas in 1963. And
that man was Lee Harvey Oswald. And you can't "frame" a GUILTY person.

FRAME -- "Contrive the evidence against (an innocent person) so
that a verdict of guilty is assured." -- Merriam-Webster OnLine
Dictionary

Another "SBT"-related item that I want to bring up is associated with
Jim DiEugenio's 2009 comments about President Kennedy's "strap
muscles".

DiEugenio evidently believes that the Warren Commission's Arlen
Specter (with the assistance of Arlen's ever-obedient lapdog, Dr.
James Joseph Humes) invented some kind of "B.S. story" [DiEugenio;
07/16/09] about the strap muscles of JFK.

Jim D. seems to think that this "B.S. story" concerning Kennedy's
strap muscles was necessary in order for Specter and his merry band of
worthless WC liars and cover-up artists to further perpetuate the Big
Lie known as the "Single-Bullet Theory".

But just WHY would DiEugenio (or anyone) think that such obfuscation
and lies were necessary in the first place?

The above question, IMO, is a very good one to ask a conspiracy
theorist like DiEugenio--especially when also directing the
conspiracist to Warren Commission Exhibit #903 (one of my very
favorite Commission exhibits): 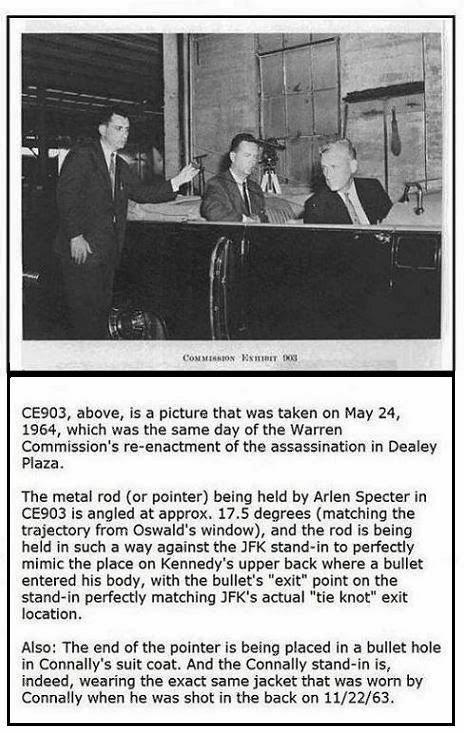 As we can easily see in CE903 above, Arlen Specter and the Warren
Commission certainly did NOT require Bullet CE399 to enter President
Kennedy's NECK (which is the place on Kennedy's body where almost all
CTers think the WC has the bullet entering JFK).

In fact, if the entry point for the bullet were to be moved up into
the "NECK" of the President (or the stand-in for the President in
CE903), the trajectory for the SBT would essentially be ruined,
because the bullet would then be exiting TOO HIGH on Kennedy's body
for the SBT to be valid (the bullet would exit around the level of the
chin via such a "neck" entry location, instead of where we know the
bullet did exit--at the tie knot).

Specter's pointer in CE903 shows that the SBT trajectory works just
perfectly -- with the entry wound on JFK being in the UPPER BACK (not
the "neck"), the exit wound on Kennedy being right at the tie knot
(just exactly coinciding with JFK's real throat-wound location), and
the end of Specter's pointer being placed in the bullet hole in John
Connally's jacket (the exact jacket worn by the real John Connally on
11/22/63).

So, I'd like to ask James DiEugenio this question---

With a photographic exhibit in the public record like CE903 (which
beautifully demonstrates, in a visual manner, the complete workability
and feasibility of the single-bullet hypothesis), why would Arlen
Specter (or any other Warren Commission member) feel the need to
invent a "B.S. story" about the strap muscles of President Kennedy in
order to further advance the notion that the SBT is the truth?

I can only assume that Mr. DiEugenio must also believe that Commission
Exhibit 903 is worthless and is part of the "B.S. story" that Jim
thinks Specter invented from whole cloth.

Jim must certainly believe that CE903 is worthless and useless as
demonstrative SBT-endorsing evidence. Because if Jim doesn't think
that CE903 is worthless, then he'll need to re-think a lot of his
other anti-Warren Commission criticisms when it comes to the subject
of the Single-Bullet Theory.

And that's because CE903, all by itself, proves that the Warren
Commission did not require a bullet to enter John F. Kennedy's "NECK"
in order to make the Single-Bullet Theory plausible.

The only question that remains now is---

Why do conspiracy theorists like James DiEugenio believe the stupid
and impossible things they believe? 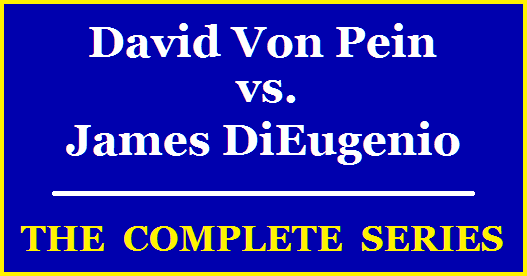