DID THE POLICE FAKE EVIDENCE
IN THE SNIPER'S NEST?


SOME CONSPIRACY THEORISTS THINK THE POLICE MOVED THE BOXES IN THE SNIPER'S NEST PRIOR TO THE BOXES BEING PHOTOGRAPHED. AND MANY CTers ALSO THINK THAT THE PAPER BAG FOUND IN THE NEST WAS MANUFACTURED BY THE POLICE.

BUT DOES ANY OF THE VERIFIABLE EVIDENCE BEAR OUT SUCH VILE CONSPIRATORIAL ALLEGATIONS AIMED AT THE DALLAS POLICE DEPARTMENT?

Multiple Dallas Police Department and Sheriff officials provided
evidence (via their Warren Commission testimony and the official
DPD photographs) that proves the conspiracy theorists are wrong
when they accuse the DPD and Dallas Sheriff's Department of all
kinds of lies and conspiracy-favoring activity with respect to the
"box" evidence found inside the "Sniper's Nest" on the 6th Floor
of the Texas School Book Depository Building shortly after John
F. Kennedy was assassinated on November 22, 1963.

Luke Mooney, Carl Day, and Robert Studebaker all provided such
evidence and testimony. Are they all liars? And are BOTH sets of DPD
photos (taken by Day and Studebaker) to be considered "faked"?

Mooney testified (plain as day) that there was a box "tilted" (on the
windowsill) when he first saw the box arrangement in the Sniper's
Nest.

A portion of Mooney's Warren Commission testimony regarding this
matter is shown below [3 H 285]:

JOE BALL -- "Is that the way the boxes looked?"

LUKE MOONEY -- "That is [sic] the three boxes, but one of them was tilted off just a little, laying down on the edge, I believe, to my knowledge."

BALL -- "Are they arranged as they were when you saw them?"

MOONEY -- "I am not positive. As I remember right, there was one box tilted off."

BALL -- "Do I understand that you say that it appeared to you that the top box was tilted?"

By the way, CE511 depicts the exact same thing that is also shown in
"Studebaker Exhibit B", and is also the same as CE715 (with CE715
lacking the circles around the two bullet shells that are visible in
the photo shown in 511; the reason that all three shells aren't seen
is due to the angle of the picture; the third shell is out of sight in
that photograph).

MOONEY -- "So I stood guard to see that no one disturbed anything until Captain Will Fritz approached with his group of officers."

Footnote -- Why on Earth Joe Ball didn't utilize either CE1301 or
Studebaker Exhibit J (the latter being a "re-creation" done by
Studebaker himself of the original box configuration in the SN window)
when questioning Luke Mooney is a mystery to me. 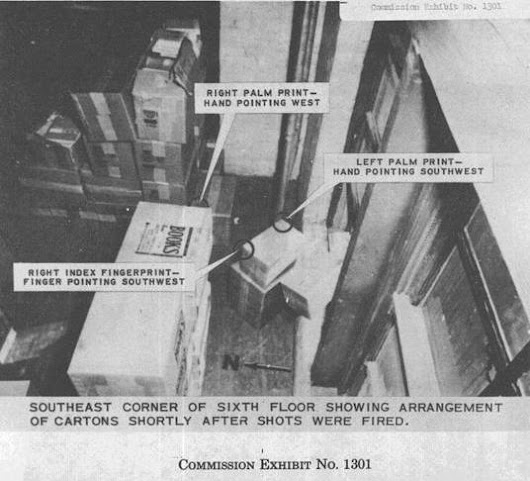 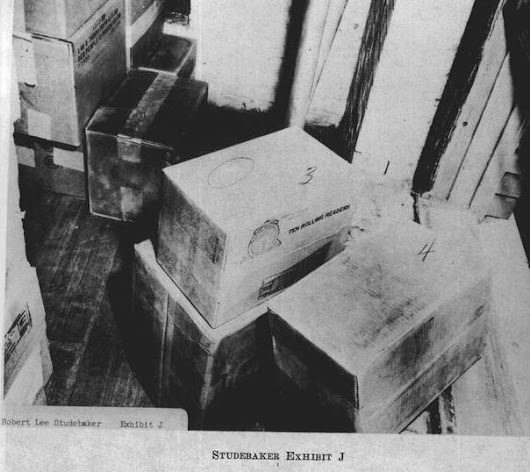 Either one of the two exhibits depicted above would have been much
better to use than CE509 or CE511. CE509, btw, was verified by Robert
Studebaker as being a picture taken (by Studebaker) AFTER the boxes
had already been moved and dusted for prints by the DPD.

So using CE509 when questioning Mooney about the "original box
configuration" is just plain silly. It makes me wonder if Mr. Ball of
the Warren Commission staff was deliberately trying to "trip up"
Mooney in some fashion (i.e., trying to find out if a member of Dallas
law enforcement would be willing to lie under oath to the WC about
some of the evidence).

A pretty good trick, I think, if that was what Ball had in mind. But,
of course, Mr. Mooney was not tripped up in any way when he was
asked if CE509 depicted the Sniper's Nest boxes before they had
been moved.

I guess it's possible that Ball, himself, didn't realize that CE509 was
not the actual configuration of the boxes before they had been moved
by the police. But it seems mighty strange to me that Ball would not
have known that fact before questioning Mooney.

In any event, Mooney's answers were perfectly consistent with an
ABOVE-BOARD AND TRUTHFUL Dallas Sheriff's Department with respect
to the box evidence found in the Sniper's Nest on 11/22/63.

There's also the evidence provided by the photo taken by news
photographer Tom Dillard within seconds of the last shot being fired
at President Kennedy (pictured below). 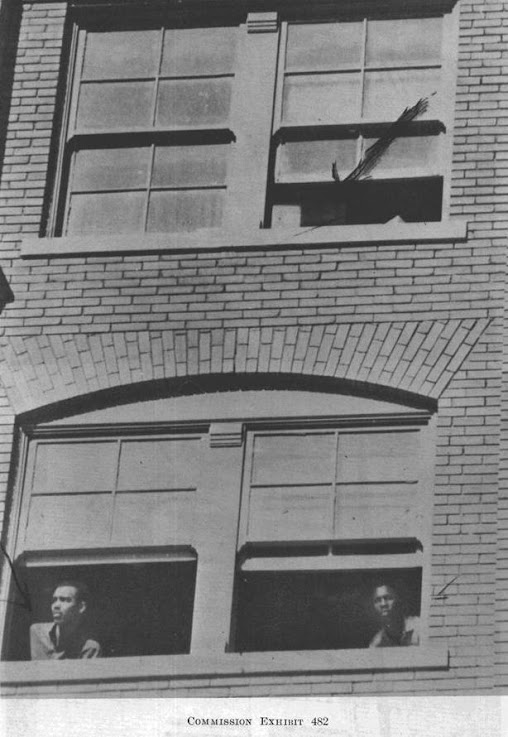 Dillard's photo verifies that there WAS, indeed, a box positioned in
the southeast 6th-Floor window in the general manner described by
Mooney, with a corner of the box clearly visible in Dillard's photo,
indicating that the box was angled in such a way during the shooting
as described by multiple DPD and Dallas Sheriff's officers (i.e., angled
in a fashion where the box configuration would serve nicely as a
"rifle rest" for a gunman who was firing a weapon in a southwesterly
direction).

That 6th-Floor gunman was later positively identified as Lee Harvey
Oswald....with Oswald's very own Mannlicher-Carcano rifle being found
tucked between boxes on the northwest side of that very same sixth
floor of the Book Depository (and with bullet shells from that same
gun being found near the assassin's window as well).

In addition, there is also the testimony given by Lt. J.C. Day of the
DPD (which is testimony that indicates the "tilted" box on the window
ledge was there ORIGINALLY...before any of the boxes inside the
Sniper's Nest were moved).

Day also acknowledges the fact, via his WC testimony, that the three
spent bullet shells ("hulls") discovered inside the Sniper's Nest were
photographed PRIOR to any of the shells being moved by any DPD
officer(s) [4 H 250-251]:

DAVID BELIN -- "Do you know whether or not Exhibit 716 and Exhibit 715 were taken before these hulls were moved?"

J.C. DAY -- "They were taken before anything was moved, to the best of my knowledge. I was advised when I got there nothing had been moved."

BELIN -- "I notice boxes throughout the picture [referring to CE715], including the box in the window. To the best of your knowledge, had any of those boxes been moved prior to the time the picture, Exhibit 715, was taken?"

BELIN -- "Now, as you face the picture [referring to CE482] -- the box to the right, which would be to the east, has a corner sticking out, or just a corner of the box shows. Is that the same box that appears to be resting on the window ledge in Exhibit 715?"

That brings us to the photos and testimony of Robert L. Studebaker of
the Dallas Police Department [7 H 140]:

JOE BALL -- "Were there any boxes on the ledge of this window?"

BALL -- "Did you take some pictures showing those boxes?"

BALL -- "Was that before any of them were moved?"

STUDEBAKER -- "That picture right there is the one that shows them, and the other pictures show them before they were moved."

BALL -- "Do you have a picture that shows the boxes themselves, just shot of those boxes in the window?"

STUDEBAKER -- "This one, Exhibit A, shows that--this is the exact--now this print here isn't too good, but you can see the indentation in this box right here. This is before it was ever moved. .... If I had known what you wanted, I would have brought you a better print--picked out a better print."

The boxes were moved, of course, at some point after being initially
photographed....and they were then photographed again, for some
reason, by Studebaker, after the boxes had been moved.

The additional photo of the SN boxes after those cartons had obviously
been moved will (naturally) lead the conspiracy freaks to reach the
unprovable conclusion that the DPD was up to no good on November 22nd
by moving a box from the windowsill to the top of another box.

However, Robert Studebaker unambiguously explained in his WC testimony
that CE509 (which is the very same picture that appears in Studebaker
Exhibit D) depicts a photograph of the SN boxes AFTER those boxes had
been moved and dusted for fingerprints [7 H 141]:

BALL -- "Now, I will show you another picture which we will mark as Exhibit D. Was that taken by you?"

BALL -- "Does that show the position of the boxes before or after they were moved?"

STUDEBAKER -- "That's after they were dusted--there's fingerprint dust on every box."

BALL -- "And they were not in that position then when you first saw them?"

As an aside -- There's also this testimony (below) given by Mr.
Studebaker (regarding the empty paper bag that was found in the
southeast corner of the TSBD's sixth floor, which was never
photographed prior to being picked up by Studebaker....which is
something that invariably causes CTers to scream "It Was Fake!").

But is it truly reasonable to believe that Robert Studebaker is lying
through his teeth here? If anyone thinks that is a reasonable thing to
believe, please tell us why it's reasonable [7 H 143-144]:

BALL -- "Now, did you at any time see any paper sack around there?"

STUDEBAKER -- "Storage room there--in the southeast corner of the building--folded." ....

BALL -- "Where was it with respect to the three boxes of which the top two were Rolling Readers?"

STUDEBAKER -- "Directly east. .... I drew a diagram in there for the FBI...he wanted an approximate location of where the paper was found." ....

BALL -- "Now, there is something that looks like steam pipes or water pipes in the corner there?"

BALL -- "Where was that with reference to those pipes--the paper wrapping?"

STUDEBAKER -- "It was doubled--it was a piece of paper about this long and it was doubled over."

BALL -- "How long was it, approximately?"

STUDEBAKER -- "I don't know. I picked it up and dusted it, and they took it down there and sent it to Washington and that's the last I have seen of it, and I don't know."

[Note -- Studebaker later did provide a size estimate for the paper bag.]

BALL -- "Did you take a picture of it before you picked it up?"

BALL -- "Does that sack show in any of the pictures you took?"

STUDEBAKER -- "No, it doesn't show in any of the pictures."

STUDEBAKER -- "It was east of the window."

BALL -- "Now, how big was this paper that you saw? You saw the wrapper--tell me about how big that paper bag was--how long was it?"

[The bag was 38 inches long, which makes Studebaker's estimate a fairly
good one. Lee Harvey Oswald's rifle, which was found on the sixth floor
at 1:22 PM on 11/22/63, measured 34.8 inches when it was disassembled.] 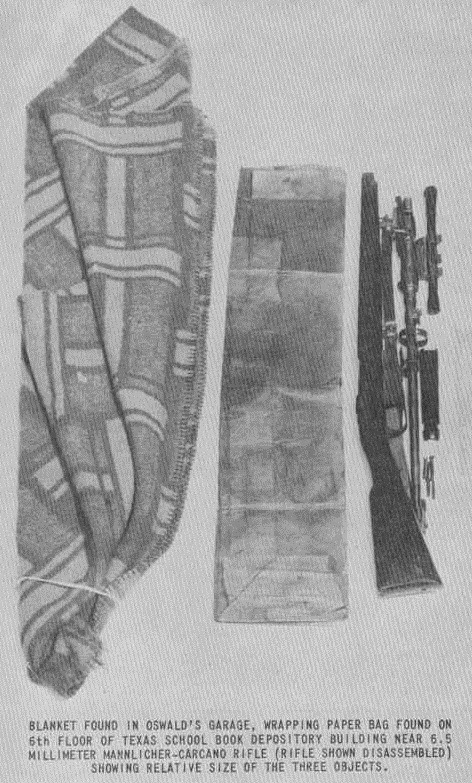 So, when all the dust has settled after examining the official Warren
Commission documents and the police officers' testimony, who should
I now trust?

Should I believe the officials of the DPD and the Dallas Sheriff's Office
who said that the box was IN THE WINDOW when they got to the sixth
floor on November 22, 1963?

And should I believe Robert Studebaker and J.C. Day of the Dallas Police
Department when they said they saw a paper bag on the floor of the
Sniper's Nest?

Or should I believe the persistent rantings of rabid conspiracists who
desperately WANT some kind of conspiracy to exist in the JFK murder
case, despite the total lack of direct support to prop up such
unprovable rantings?

Not a real tough call to make, now is it?