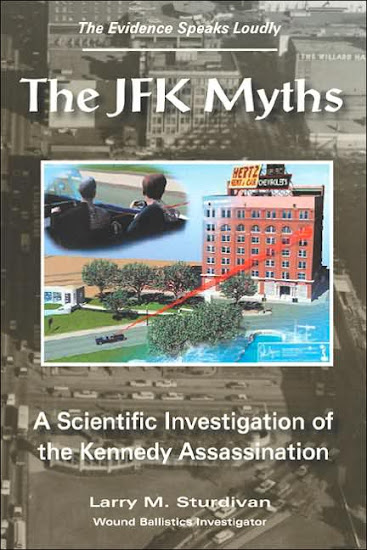 THERE HAS NEVER BEEN ANY SOLID, VERIFIABLE PHYSICAL EVIDENCE TO SUPPORT THE NOTION OF CONSPIRACY IN PRESIDENT JOHN F. KENNEDY'S ASSASSINATION -- NOT ONE PIECE!

For decades, pro-conspiracy writers have turned the JFK assassination into a massive, convoluted, "unsolvable" morass of "assumed conspiracy" (with every brand of conspirator imaginable tossed into the mix, save possibly the Pope himself) that cleverly has aroused the suspicions of the vast majority of Americans.

But the part that has been left out of the conspiratorial mix, it seems, has been the crux of the whole event -- i.e., the PHYSICAL EVIDENCE IN THE CASE. And that physical evidence, undeniably, all points toward one single killer named Lee Harvey Oswald (as Mr. Sturdivan so adeptly and systematically reveals within the pages of this very well-written publication).

The very idea that the physical evidence (all of it) in the JFK case could so unambiguously lead straight to the feet (and rifle) of just one single man (Lee H. Oswald), and yet STILL entertain the notion that a massive conspiracy of some kind existed in Dealey Plaza in November of 1963, is an idea that lacks all semblance of reasoned, realistic thinking, and common sense.

There is one particular passage contained in this book that I thoroughly enjoyed seeing in print within a widely available publication like this one. It is something that aligns nicely with what I just said in the above paragraph regarding the wealth of physical evidence against Oswald, and is a passage from Mr. Sturdivan that radiates with common sense -- and that is:

"While one of the pieces of physical evidence could conceivably have been faked by an expert, there is no possibility that an expert, or team of super-experts, could have fabricated the perfectly coordinated whole. This brings to mind the recurrent theme in most conspiracy books. All the officials alternate between the role of "Keystone Kops," with the inability to recognize the implications of the most elementary evidence, and "evil geniuses," with superhuman abilities to fake physical evidence that is in complete agreement with all the other faked evidence." -- Page 246 of "The JFK Myths"

A portion of that book quote above is worth repeating, to drive home a point that for years I have believed to be a largely overlooked or just flat-out ignored hunk of ordinary common sense that destroys many, many conspiracy theories all by itself:

"There is no possibility that an expert, or team of super-experts, could have fabricated the perfectly coordinated whole ... with superhuman abilities to fake physical evidence that is in COMPLETE AGREEMENT WITH ALL THE OTHER FAKED EVIDENCE." (Emphasis mine.)

The conspiracy promoters who do believe that this "perfectly coordinated whole" of Oswald-Did-It-Alone physical evidence was all faked or manufactured in order to implicate a completely innocent patsy must also surely believe that miracles of the highest order can, indeed, be performed.

The work of animator and author Dale K. Myers is also featured in "The JFK Myths", and Mr. Myers has (not surprisingly) given this book his full endorsement, as can be seen in this review at Amazon.com.

In fact, Myers' endorsement and involvement in "The JFK Myths" is a big reason why I initially wanted to read it. Because anything given a thumbs-up by Myers concerning the JFK case is bound to contain a good deal of a little something that virtually all pro-conspiracy publications lack -- that "something" being: hard, verifiable, factual evidence to back up the notion that Lee Harvey Oswald murdered President Kennedy on November 22, 1963.

Now, if Vincent Bugliosi had also put in a good word for this volume, I would probably have been inclined to pick up half-a-dozen additional copies. Because an endorsement by both Mr. Myers AND Mr. Bugliosi could only mean one thing -- i.e., this book is loaded with an enormous amount of common sense.

Lone assassin Lee Harvey Oswald is no doubt laughing out loud from his eternal home in the fiery pits of Hell (where he most assuredly deserves to reside) as he looks up and watches millions of conspiracists spinning their wheels attempting to "solve" a crime that was virtually solved the very day it shocked the nation in November of 1963.

I'm just glad there are at least a few people on the planet, including Larry Sturdivan, Dale Myers, and Vincent Bugliosi, who haven't been sucked up into the vacuum of the seemingly endless stream of unsupportable conspiracy fantasies.

In "The JFK Myths", ballistics expert Larry M. Sturdivan has written a very thorough and readable book on the physical evidence of the John F. Kennedy assassination. It's a most refreshing breath of unpolluted air amid a sea of murky pro-conspiracy volumes.