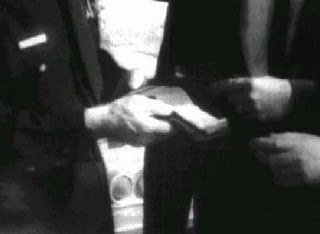 I lean towards it being [Oswald's] wallet [found by the police on 10th Street]. I think Tippit asked him for ID, Oz took out his wallet, when Tippit got out to examine it and Oz further, Oz pulled his gun (dropping the wallet) and blasted away. This explains some things, like cops on the scene saying Oz's name was in this wallet, but not everything (like it being reportedly found on Oz). I think the likeliest explanation for it being said to be found on Oz is that one cop handed it off to another, and an assumption was made that Oz was carrying it when arrested.

Well, Bud, I don't think your scenario about the wallet can be correct (unless Lee Harvey Oswald was carrying two wallets on him when he left 1026 Beckley on 11/22/63).

Gerald Hill and Paul Bentley of the DPD later confirmed that a wallet (or "billfold") was removed from Oswald's hip pocket in the police car after the theater scuffle. [See the video below for the confirmation of this by Bentley.]

Gerald Hill said this to the Warren Commission:

"About the time I got through with the radio transmission, I asked Paul Bentley, "Why don't you see if he has any identification." Paul [Bentley] was sitting sort of sideways in the seat, and with his right hand he reached down and felt of the suspect's left hip pocket and said, "Yes, he has a billfold," and took it out. .... After about the time Bentley reached in his pocket and got his billfold, the suspect made the statement, "I don't know why you are treating me like this. The only thing I have done is carry a pistol in a movie"."


Although Paul Bentley of the DPD was not called to testify in front of the Warren Commission, Bentley himself (multiple times) confirmed finding Oswald's wallet in LHO's back pocket in the police car.

"The following day [11/23/63], Detective Paul Bentley gave WFAA-TV a similar account [similar to Gerald Hill's account given to NBC-TV from the previous day] during a live interview.

"I asked for his name, and he refused to give me his name," Bentley said. "I removed his wallet from his back pocket and obtained his identification."

"In December 1963, the five arresting officers filed reports to Police Chief Jesse Curry detailing the circumstances of Oswald's capture. Only one [Bentley] mentioned the wallet in his report -- "On the way to city hall, I removed the suspect's wallet and obtained his name," Detective Bentley wrote." -- Pages 294 and 295 of "With Malice"


The above-mentioned statement made by Bentley in his report to Curry is confirmed via CE2003 (Page 78).

Interestingly, however, on Page 296 of "With Malice", Myers talks about how Officer C.T. Walker (who rode in the back seat of the patrol car with Oswald and Bentley after LHO's arrest) said that he (Walker) personally removed Oswald's wallet from LHO's pants pocket AT THE POLICE STATION (not in the patrol car). Walker said that during an interview he gave to the HSCA in 1978.

It's also worth noting that Paul Bentley WAS at the scene of the Tippit murder on Tenth Street as well as being inside the police car next to Oswald after LHO's arrest at the Texas Theater.

So, there you have it. Both Hill and Bentley seem to confirm (unambiguously) that a wallet WAS definitely removed from Lee Oswald's back pocket in the police car on the way to City Hall.