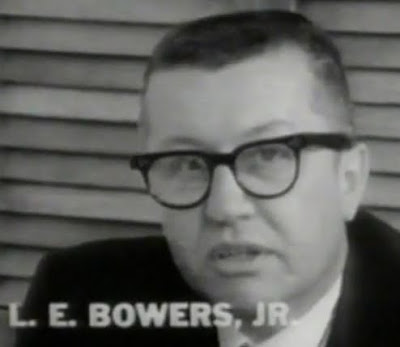 The more one looks over the Warren Commission testimony of assassination witness Lee E. Bowers, Jr. (plus his 11/22/63 affidavit), the less and less "pro-conspiracy" and "pro-multiple shooters" Mr. Bowers becomes (despite the fact that conspiracy theorists for years have loved to prop Bowers up as a sterling and rock-solid "conspiracy" witness).

Lee Bowers' testimony is quite interesting in the "Where Did The Shots Come From?" regard. Upon looking at his April 2, 1964, Warren Commission testimony, we can certainly see how, indeed, the conspiracists have gently turned Bowers into a "conspiracy" witness, when he actually doesn't really belong in that category at all.

Bowers is one of the many assassination witnesses who heard exactly three shots fired on 11/22/63 in Dallas' Dealey Plaza, and he said the shots came from either the area of the Texas School Book Depository Building OR the Triple Underpass area. But he did not hear shots coming from BOTH of those locations. It was one or the other, but not both.

Conspiracy theorists, however, have turned Mr. Bowers into a conspiracy-favoring witness who (to hear the CTers tell it) positively saw PROOF of a second gunman atop the Grassy Knoll. But when you look more deeply at his testimony, it can be seen that he's not actually a witness with which to promote conspiracy or a Knoll shooter at all.

Bowers didn't see a gunman on the Grassy Knoll or behind the picket fence behind the Knoll. He didn't see any rifle or other weapons. He merely saw some "milling around". Let's look at Mr. Bowers' exact words to the Warren Commission:

The conspiracy buffs, in true-to-form "Make Mountains Out Of Molehills" style, have thus turned Mr. Bowers' "out of the ordinary", "milling around", "I just am unable to describe", and "I could not identify" remarks into apparent "proof" that a killer had just shot JFK from behind a fence atop the Grassy Knoll....even though Bowers saw NO WEAPONS OF ANY KIND in the hands of anyone he observed that day. And he specifically said he "could not identify" what it was that caught his eye in the area of the fence.

The testimony of Bowers also provides some idea as to the type of reverberating sounds that can be produced in Dealey Plaza. And while earwitness testimony is useful to a degree, it is at the same time, as lawyer Vincent Bugliosi has said repeatedly throughout his career, "notoriously problematic".

Mr. Bugliosi made the following remarks to a jury in London, England, in July of 1986, during a television docu-trial ("On Trial: Lee Harvey Oswald"):

"With respect to whether or not any shots were fired from the Grassy Knoll, I want to make the following observations -- firstly, it is perfectly understandable that the witnesses were confused as to the origin of fire. Not only does Dealey Plaza resound with echoes, but here you have a situation of completely-unexpected shots over just a matter of a few moments.

"When you compound all of that with the fact that the witnesses were focusing their attention on the President of the United States driving by, a mesmerizing event for many of them....and the chaos, the hysteria, the bedlam that engulfed the assassination scene....it's remarkable that there was any coherence at all to what they thought they saw and heard.

"Human observation, notoriously unreliable under even the most optimum situation, HAS to give way to hard, scientific evidence. And we do have indisputable, scientific evidence in this case that the bullets which struck President Kennedy came from his rear, not his front."

MORE ABOUT BOWERS AND BUGLIOSI:

"There's a strong reason to believe that what Bowers said is not credible. .... [In Bowers' 11/22/63 affidavit] he said absolutely nothing at all about the commotion and unusual activity behind the picket fence that attracted his attention."

"If Bowers hadn't died...in August of 1966, it probably would have been just a matter of time before he had Jack Ruby with a machine gun on the grassy knoll."

The above comment that Bugliosi made about Lee Bowers' affidavit is a very good point. In his original 11/22/63 affidavit, which was written by Bowers on the day the shooting occurred (when things were certainly fresher in his mind than they were at any other time after the assassination, including his filmed interview with Mark Lane in 1966), Bowers doesn't mention a single word about having seen any men near the picket fence.

In fact, practically the entire affidavit contains Bowers' observations about the three cars that circled the parking lot just prior to the assassination, with the shooting itself seemingly being a mere afterthought in Bowers' mind. The only reference to the actual shooting comes in the last two sentences of Bowers' affidavit, when he says:

"About 8 or 10 minutes after he left [i.e., the last of the three cars that toured the lot] I heard at least 3 shots very close together. Just after the shots the area became crowded with people coming from Elm Street and the slope just north of Elm."

Therefore, any men that Bowers may have seen behind the picket fence on November 22, 1963, were so UNIMPORTANT to him on the day of the assassination itself that he didn't even bother to mention seeing those men in his voluntary statement that was written within hours of President Kennedy's assassination.

But, as previously noted, Bowers did spend ample time in his affidavit explaining all about the three cars that circled the parking lot before the shooting. Obviously, THAT activity concerning the vehicles was much more important and significant to Mr. Bowers when it came to relating any pertinent details about the events of that day than were any of the men whom he might have seen hanging around the picket fence.

Conspiracy theorists who think Lee Bowers holds the key to unlocking the mystery that surrounds JFK's murder just might be wise to ask themselves why, in Mr. Bowers' mind on November 22, the information about CARS CIRCLING THE PARKING LOT trumped and superceded (in importance) A MAN SHOOTING AT THE PRESIDENT WITH A GUN NEAR THE PICKET FENCE?

Is Lee Bowers a liar?

Lee Bowers is one of those witnesses who has been turned into a (supposedly) excellent "conspiracy" witness by conspiracy authors, but he's really not much of a "conspiracy" witness at all. It's CTers (like Mark Lane) who want everyone to believe Bowers saw some killers on the Grassy Knoll. But Bowers never ever said any such thing.

Witnesses always got "better," conspiracy-wise, in the hands of Mark Lane, didn't they? Despite the heavy editing and convenient cuts for which Lane is famous, insofar as Cory's assertions are concerned, he said nothing different from what he had said at the WC.

Except that in the interview with Mark Lane [available to view below], Bowers added a comment about possibly seeing "a flash of light" or "smoke" near the Grassy Knoll. He never said anything about "flashes of light" or "smoke" in his Warren Commission testimony. (I just looked.) So that makes me wonder what influence Mr. Lane had on Mr. Bowers prior to that 1966 interview.