THE ZAPRUDER FILM
AND THE HEAD SHOT

WHAT DOES "BACK AND TO THE LEFT" PROVE?
ANYTHING AT ALL?

Well, heck yes, they all thought that from JUST focusing on the "back and to the left" reaction of JFK on the Z-Film. Cripes, who WOULDN'T?

But out of those 35 classmates of yours, how many have ANY idea what the autopsy report says regarding JFK's head wounds? And how many have ever read the Warren Commission testimony of one James J. Humes, the lead autopsist? Any of them do those things? (I'm doubting they have.)

The "back and to the left" motion of President Kennedy's head is definitive proof of NOTHING with respect to the precise direction from which the bullet came.

The Zapruder Film is ONE PIECE of evidence to look at and evaluate, sure. But why would anybody simply stop after watching the Z-Film, toss up their hands, and say "That's it! He was shot from the front! Let's have lunch!"?

Read the autopsy report and the doctors' statements. Put the pieces TOGETHER. Don't leave them isolated (like most conspiracy theorists seem to want to do).

And there are the autopsy photos too....which tell us this:

There was only ONE entry hole in JFK's head -- and it was IN THE REAR of Kennedy's head. Hence, there is no way POSSIBLE that the head shot came from the FRONT:

There's this super-slo-mo version of the Zapruder Film at circa Z312-Z313 (linked below), verifying beyond very much doubt whatsoever that at the exact moment the bullet strikes its target (i.e., JFK's cranium), the President's head is being pushed FORWARD (away from the Book Depository Building and in the same direction the speeding bullet is travelling).

Only after this initial forward movement does JFK's head start to move backward.

And the "NOT A SPECK OF BLOOD CAN BE SEEN AT THE EXIT POINT IN THE BACK OF THE HEAD IF JFK HAS SUPPOSEDLY JUST BEEN HIT BY A FRONTAL SHOT" thing too.

Does any conspiracy theorist have any "Frontal Shot" explanation(s) at all for those two "blood" observations I just mentioned, which can both easily be seen on Mr. Zapruder's movie?

And CTers can't really very logically use the excuse of "The Z-Film has been faked". Why? Because almost all conspiracists think that the "back and to the left" motion of Kennedy's head on the Zapruder Film almost single-handedly convinces those CTers that a frontal shot hit JFK in the head.

Therefore, with that popular belief in the minds of so many people -- who in the wide, wide world of conspiracy plots would be stupid enough to go to the trouble of "faking" a film in such a way so that the end result of such fakery would PROVE "conspiracy" in the eyes of so many Z-Film viewers, rather than lead away from that dreaded "C" word?

Let's have a look at what JFK's chief autopsy doctor had to say in 1992:

"In 1963, we proved at the autopsy table that President Kennedy was struck from above and behind by the fatal shot. The pattern of the entrance and exit wounds in the skull proves it, and if we stayed here until hell freezes over, nothing will change this proof. It happens 100 times out of 100, and I will defend it until I die. This is the essence of our autopsy, and it is supreme ignorance to argue any other scenario. This is a law of physics and it is foolproof--absolutely, unequivocally, and without question. The conspiracy buffs have totally ignored this central scientific fact, and everything else is hogwash. There was no interference with our autopsy, and there was no conspiracy to suppress the findings." --Dr. James J. Humes; 1992 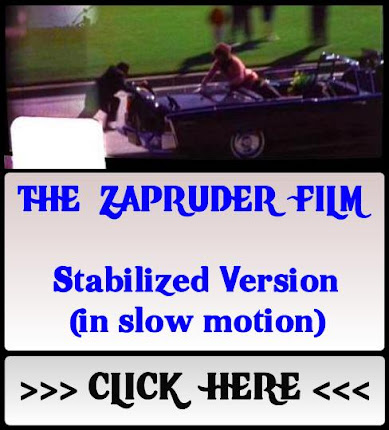