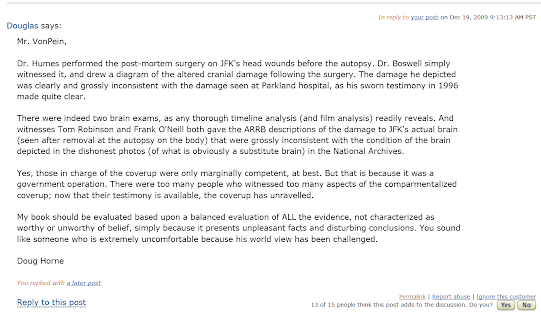 Dr. Humes performed the post-mortem surgery on JFK's head wounds before the autopsy.

The above single sentence penned by Douglas P. Horne should be enough
of a reason all by itself, with nothing more added, for all sensible
and reasonable people to disregard Mr. Horne's theories as pure
hogwash and nonsense (not to mention impossible).

Mr. Von Pein, this is in response to your claim that there is nothing wrong with the autopsy x-rays and photos. Many autopsy photos, and two skull x-rays, are missing.

Yes, there are indeed apparently some autopsy photos "missing". But I
will once again have to agree with the man who wrote the best book
ever written on the JFK assassination, Vincent Bugliosi, when he said
this in "Reclaiming History":

"For years conspiracy theorists have charged that the "missing"
autopsy photographs are, in their minds, one more indication of a
conspiracy in the assassination. .... But...with literally hundreds of
people from various official investigative agencies...examining and
working with the photos throughout the years, I not only don't find it
suspicious, I find it completely predictable that one or more
photographs ended up missing, misplaced, or expropriated by people
through whose hands they passed." -- Vincent T. Bugliosi; Page 275 of
"Reclaiming History: The Assassination Of President John F.
Kennedy" (Endnotes on CD-ROM)

Dr. David Mantik, M.D., Ph.D., in 9 visits to the [National] Archives (most of them during the 1990s), has conclusively proven that the three surviving skull x-rays in the National Archives are altered copy films, not original x-rays. The science he used was optical densitometry, a technique not employed by the HSCA's "experts" because they didn't think outside the box.

And yet at the end of this day (like all other days since the HSCA
final report was published in early 1979), we're still left with the
conclusions of the TWENTY or so experts who were a part of the HSCA's
Photographic Panel, with those conclusions being:

"The evidence indicates that the autopsy photographs and X-rays
were taken of President Kennedy at the time of his autopsy and that
they had not been altered in any manner." -- 7 HSCA 41

Quoting old findings which did not employ optical densitometry as an analytical technique does NOT discredit his [Dr. Mantik's] work, it is simply an intellectually dishonest way of attempting to ignore it.

I'm certainly not alone in my disagreements with Dr. Mantik. Many
other people also strongly disagree with Dr. Mantik's conclusions
regarding the photographs and X-rays, and also disagree with his
notion that some conspirator(s) had a desire to "plant" a "6.5-
millimeter object" onto one of JFK's X-rays after the autopsy, which
is a notion that defies logic from all sensible points-of-view (mainly
because it was so utterly UNNECESSARY AND SUPERFLUOUS).

But Dr. David Mantik doesn't care about Occam and his handy (and
usually accurate) razor. Instead of applying some measure of logic and
common sense (and Occam) to the controversial matters surrounding
JFK's murder, Dr. Mantik (and you) would rather peddle impossible-to-
prove theories for years on end.

And, of course, there will always be somebody out there in fantasy-
land who will be ready to listen to the impossible-to-prove theories
of conspiracy theorists like Doug Horne and David Mantik. Such is the
way with the world.

Hopefully, your attempts to dissuade people from reading my book will backfire, and badly. All of your concerns are addressed and countered, more than adequately, in my book, for those who are curious and have an open mind.

I'm not attempting to "dissuade" anyone from reading your 5 volumes of
nonsense, Doug. Not at all. Hopefully many people will buy your books.
And among those people who buy them there will certainly be a decent-
sized percentage of logical and reasonable folks (like me) who know
beyond any and all doubt that none of the over-the-top theories that
you purport as being true and valid in your book series entitled
"Inside The Assassination Records Review Board" can possibly be
accurate...because the stuff you think happened in November 1963 is
just (to put it bluntly) too ridiculous to consider believing for more
than three seconds.

Have a nice day. And thank you for attracting more attention to my book. Surely, anyone reading this debate in the [Amazon.com] comments section will now want to buy it, to see what this is all about---so they can make their own assessments.

Yeah, if only for the many belly-laughs that your impossible-to-prove
conspiracy theories will undoubtedly elicit from the people reading
your books.

But good luck selling them anyway.

Have a nice day.

Let's just take a quick (but by no means comprehensive) inventory
of a few of the insane and crazy things that Mr. Douglas P. Horne
believes happened with respect to the death of the 35th U.S. Chief
Executive. [And most of Horne's irrational beliefs are laid out via his
many ARRB memos, located HERE.]

And keep in mind that Mr. Horne thinks that ALL of these things
definitely occurred in connection with JFK's assassination, and this
short list is probably only the tip of the iceberg when it comes to
the crazy conspiracy-oriented things that Mr. Horne puts his faith in.

Back in the world of sanity and REALITY, however, in order to believe
that even ONE of the following things is actually true, a person has
no choice but to place his faith in something that is really, really
silly:

1.) Doug Horne believes that President Kennedy's bullet wounds were
"altered" by Dr. James Joseph Humes at Bethesda Naval Hospital on the
night of November 22, 1963, with the President's wounds being altered
by Humes before the start of the official autopsy on JFK's body.

2.) Doug Horne believes that there were TWO separate brain
examinations performed by the autopsists in late November 1963, with
one of these supplementary brain exams being performed on a brain that
was NOT John F. Kennedy's brain. And the second brain exam was
apparently done on a brain that was WAY TOO BIG to even be JFK's own
brain. (The plotters/cover-up agents involved in this silliness
evidently had no brains at all in any of their own heads, because this
craziness is BEYOND silly and stupid. It's utterly insane, as is #1
above, of course.)

3.) Doug Horne believes that the Zapruder Film has been altered. And
Horne believes the film was faked/altered/manipulated despite the fact
that we know that the original film, both BEFORE and immediately AFTER
it was developed and copied in Dallas on 11/22/63, was never out of
the sight of Abraham Zapruder and/or Zapruder's business partner,
Erwin Schwartz. But maybe Mr. Horne would like to pretend that
ordinary Dallas citizens like Zapruder and Schwartz were also part of
the plot to conceal all of the best evidence from the eyes of the
American public immediately after JFK was shot.

4.) Doug Horne believes that multiple X-rays of JFK's head have been
faked/altered.

The above short list, as I mentioned, is probably only a
representative sampling of the ridiculous and impossible things that
Mr. Horne believes regarding the John F. Kennedy murder case, with the
above four items being things that I jotted down after listening to
Horne's appearance on "Black Op Radio" on December 10, 2009.

I'll close this post with some additional excellent quotes from the
master of CS&L [Common Sense & Logic], Vince Bugliosi:

"Before Doug Horne, the main beef that most conspiracy theorists
had with the autopsy surgeons was their alleged incompetence. But
thirty-five years after the assassination, Horne showed all these
naive, whippersnapper conspiracy theorists a thing or two. Humes and
Boswell weren't incompetent. They were criminals and co-conspirators.

One would think that Horne would be ashamed of himself for
writing the memorandum he did. But to the contrary, he is very
proud. ....

A great number of nuts have kept pumping out conspiracy
theories for years. But these are private nuts, on the outside as it
were. But when someone like Horne, working for an official review
board of the federal government, someone we expect to be responsible,
can author a document that couldn't possibly be any sillier or
transparently irresponsible, then unfortunately we know that the
notion of a conspiracy in the Kennedy assassination will be alive and
well until the crack of doom.

I suppose it is a given that there will be other Doug Hornes
who will breast-feed the conspiracy loonies for generations to come
with their special lactations of bilge, blather, and bunk.

One wants to take earnest, well-intentioned, and intelligent
people like Drs. David Mantik and Gary Aguilar seriously, even though
neither of them are pathologists. But when they take someone like Doug
Horne seriously, and accept his outrageous and patently false theory
as completely valid, it becomes much more difficult to take them
seriously." -- Vincent Bugliosi; Pages 435-444 of "Reclaiming History"