WAS LEE HARVEY OSWALD "PLANTED" IN THE BOOK DEPOSITORY BY PLOTTERS?


Many conspiracy theorists seem to believe in the notion that Lee Harvey
Oswald (who was the man who shot and killed President John Kennedy in
1963) was somehow "planted" in the Texas School Book Depository
Building by scheming plotters who were manipulating Oswald's every move
to suit their "Patsy"-serving conspiratorial needs. But such talk is
just pure nonsense of the first order. And there are many, many reasons
why it's nonsense....

While it is true that the Kennedy tour through Texas (including Dallas)
had been announced initially in Dallas papers in September of 1963, a
month prior to Oswald's getting hired by Roy Truly at the Depository,
it's also quite true that neither Oswald nor any assassination-planning
henchmen could have possibly known as of October 15th (which was the
date Oswald was hired by Mr. Truly) that a motorcade was going to take
President Kennedy's car directly past the front door of the Book
Depository on November 22nd.

The decision to have a motorcade through the city wasn't finalized
until weeks after Oswald's mid-October TSBD hiring, when such a parade
through downtown Dallas was approved by none other than Texas
Governor John B. Connally himself, who rode in the very same car with
JFK during the motorcade and became a second victim of the Dallas
shooting on November 22, 1963.

Therefore, no conspirators (nor Oswald himself even) could have known
of any motorcade drive through downtown Dallas by mid-October, let
alone that any such motorcade would take the President directly in
front of the Book Depository in the middle of a WORK DAY FOR OSWALD.

Which brings up yet another oft-ignored little tidbit about this subject --
i.e.: what if the President had toured Dallas on a Saturday or a Sunday
(instead of a work day, e.g. a Friday)? In such a case, Oswald would not
even have been working within the Book Depository building at the time
when the President drove by. That would have tossed a nice irritating
monkey wrench into the "Frame Oswald As The Patsy" conspiracy plot, huh?

Therefore, to the CTers who believe such nonsense, it was yet another
amazing piece of good fortune for the people who "planted" Oswald in
the building to kill JFK, was it not? The President comes through
Dallas on a weekday, and just happens to drive slowly by the workplace
of Oswald, who had secured a job there a full month before any
conspirators (or Oswald) could have possibly known if the Depository
was even going to be a useable location to hide a sniper.

Incredible foresight by the "plotting team", indeed. Via such a plan,
these same conspirators must have had "Oswalds" planted in virtually
every building in Dallas, to ensure that Kennedy would pass at least
ONE of them.

~~ big grin at the absurdity of such a notion ~~

If Oswald was "planted" in the Depository building for the sole purpose
of murdering the President a month later (as some people think; which
assumes, as mentioned before, that any "plotters" were clairvoyant),
then an accusing conspiratorial finger MUST be pointed at a number of
people who aided Oswald in getting hired at the TSBD in mid-October.
Namely: Ruth Paine (who made the call to the Book Depository on Lee's
behalf and set up an interview for Oswald) -- plus Marina Oswald and
Linnie Mae Randle, who were both present at the home of a neighbor of
Ruth Paine's (Dorothy Roberts) when the subject of Lee's unemployment
was first brought up.

And, of course, Roy Truly, the Depository Superintendent, would also
have to be considered a KEY conspirator as well, since it was Roy who
actually HIRED Lee Oswald.

Plus: It's often forgotten that Truly could have assigned Oswald to
work at another building owned by the TSBD Company, which was not
located in Dealey Plaza and was not situated along the President's
November 22nd motorcade route.

So, if Truly was NOT a "conspirator", then it was mighty fortunate for
the people who WERE plotters to have Truly hire Oswald in the first
place (when he easily could have told Lee to get lost), PLUS to have
Truly place Oswald in the Depository branch on Elm Street where the
"plotters" needed to have Lee working on November 22. (And the plotters
just prayed that Kennedy would come on a weekday, too, remember, when
Oswald would be working in the building.)

How anyone with a grain of sense can actually believe for a moment
all of that conspiracy-oriented hocus-pocus regarding Oswald getting
his job, is beyond me. The cloudy and shrouded-with-doubt
conspiracy-slanted version of these events surrounding Oswald's
employment is so ridiculous and implausible that it can easily be
considered impossible (here in the "real" world, that is, where miracles
rarely, if ever, occur).

Any "CT" variation regarding the neighbors who first suggested that the
Depository might have an opening is utterly unbelievable from every
angle, and would require multiple extra conspirators, people who had
never met Lee Harvey Oswald in their lives, including 19-year-old stock
boy Wesley Frazier.

Can anyone believe that these seemingly-invincible plotters somehow
arranged to have Marina Oswald live temporarily with Mrs. Paine, who
just happened to live only a half-block away from Wes Frazier, who just
happened to work in the Depository and who just happened to mention to
his sister one day that a job at his workplace might be available, so
that Linnie (NOT Wesley) would just happen to casually mention this
possible job opening while having coffee at a neighbor's house (which
wasn't Ruth Paine's house either; it was at the house of Ruth's
next-door neighbor, Mrs. Roberts)?

And, how did the plotters arrange to not only have Lee hired at the
Elm St. warehouse, but how did they arrange for Oswald to even WANT
to go and apply for this job at the Book Depository?

What if Oswald would have gotten different work the day before, which
almost did happen. The Texas Employment Commission, in fact, attempted
to contact Oswald on the very day he started working at the TSBD
(October 16, 1963), regarding an even better-paying job for an airline
company, which had some openings for baggage handlers.
[See Warren Commission Report, p.247]

So, another question needs to be addressed by the CTers who think
Oswald was "placed" in the Book Depository by evil-doers .... i.e.: How
did any "plotters", needing Oswald to be in the TSBD on November 22nd,
know for certain that Oswald wouldn't just simply quit his Depository
job and take a job elsewhere prior to the President's November visit to
Dallas?

And: How did these conspirators also know that Oswald wouldn't gain
employment someplace else prior to November 22? (He was looking for
work in early October, and had applied at several places, but was not
hired.)

The obvious "pro-LN" alternative to all that conspiratorial
sleight-of-hand is the Occam's Razor (simplest) explanation, which is
1,000 times more believable (and doable) than any "Oswald Was Planted
In The Building" theory.

With that "Lone Nut" version of events being:

1.) Lee Oswald was out of work in early October of 1963 and needed to
find a job to support himself and his wife and his infant daughter
(with another baby on the way in a matter of days).

2.) By pure happenstance, a neighbor of Mrs. Ruth Paine's mentioned to
Ruth and Marina that a Depository job might be available (although she
was not sure of this).

3.) Marina and Ruth informed Lee about this job tip, and Lee went to
the Book Depository at 411 Elm Street the next day and was hired to
fill book orders for $1.25 an hour.

4.) Lee then seizes a perfect opportunity to strike back at an America
that he feels has snubbed him (just my guess as to part of his motive),
and after probably reading about the detailed motorcade routing in the
newspaper on November 19 or 20 (which is the EARLIEST he could have
possibly known for certain that JFK would be driving right by the
Depository building), he prepares a last-minute, one-man plot all his
own -- arranging an unusual Thursday-night trek to Irving, Texas, to
visit the Paine home where his wife, Marina, is staying (to retrieve
the rifle he has stored in the garage there).

5.) Lee wraps up the disassembled rifle in brown paper and on Friday
morning tells his ride to work (Wesley Frazier) that the bulky package
contains curtain rods (a lie he conceived the previous day, when he
told Frazier that he needed the ride to Irving on Thursday to fetch
some curtain rods to put up in his apartment on Beckley Avenue—
a room which needed no curtains, or rods, by the way).

6.) By incredible good fortune (for him) Lee has the entire 6th Floor
of the Depository building to himself at exactly 12:30 P.M. on November
22, just as the President is passing by below on Elm Street.

7.) Lee, who couldn't keep himself entirely hidden from people on the
OUTSIDE of the building, is seen by eyewitness Howard L. Brennan firing
a rifle toward the direction of President Kennedy's limousine.

8.) Oswald is then seen by Dallas police officer Marrion Baker in the
2nd-Floor lunchroom, approximately 90 seconds after the final of three
shots had been fired at the President.

9.) Oswald is not surprised in the least to have Baker's gun thrust at
his mid-section for a brief moment. Why? Because Oswald, of all people
in Dealey Plaza, was THE ONE AND ONLY PERSON who already positively
KNEW why a cop would be searching that building at that time -- because
Oswald had caused this turmoil himself. So why SHOULD he be "surprised"
to see the officer? He shouldn't. And wasn't.

Oswald had the means, a probable motive, a perfect opportunity on a
deserted sixth floor, and the ability to accomplish the deed. These are
the things that add up to Lee Harvey Oswald's lone guilt in the murder
of President John F. Kennedy.

ANY conspiracy theory that would be used to counter the above simple,
based-on-the-evidence assessment pales by comparison (in both logic and
common sense, as well as HARD EVIDENCE) to the lone-assassin scenario.
Always has. 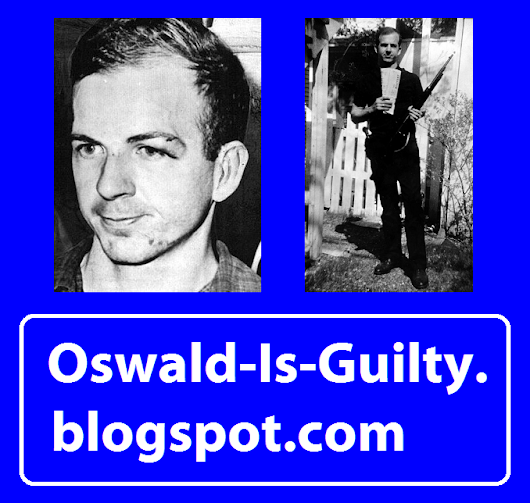 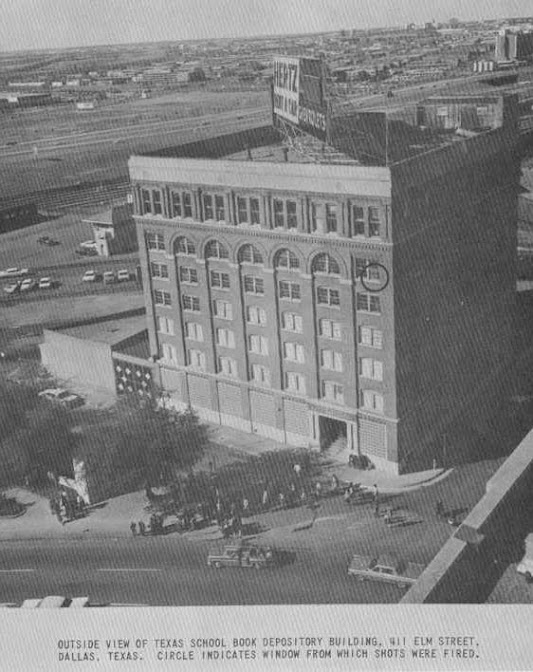