Putting a myth (or two) to bed regarding the man who had a seizure in Dealey Plaza approximately 15 minutes before President Kennedy was assassinated:

When looking over some of Jim Garrison's absurd comments that he made during his 1967 Playboy Magazine interview, I took note of this hunk of silliness (which was depicted this way in Oliver Stone's 1991 movie as well):

"We have also located another man who was not involved in the shooting but created a diversionary action in order to distract people's attention from the snipers. This individual screamed, fell to the ground, and simulated an epileptic fit, drawing people away from the vicinity of the knoll just before the President's motorcade reached the ambush point." -- Jim Garrison; 1967


My response to the above garbage:

This is yet another outright lie from the lips of District Attorney Garrison. The man who had the so-called "simulated epileptic fit" was fully identified by the FBI on May 26, 1964. His name was Jerry Belknap, a 23-year-old man who had regularly suffered from fainting spells after being hit by a car several years earlier.

Contrary to popular belief, however, Belknap's fainting spells were probably not related to any form of epilepsy. [See Commission Document 1245; Pages 9-10, shown at the bottom of this post and also linked HERE.]

In his book "Case Closed", Gerald Posner prints some incorrect info about Belknap, which is quite odd, since Posner relied exclusively on CD1245 for his information concerning this matter. (Posner's only source for the Belknap matter is CD1245 at any rate.)

Posner tells his readers that Belknap was "an epileptic who had suffered seizures since childhood" ("Case Closed", 1994 paperback edition, p.231). But that statement does not appear to be true at all, according to what Belknap himself said about his "fainting spells" during his FBI interview on June 8, 1964:

As a footnote to the Belknap story, here's a quote from Vincent Bugliosi:

"The conspiracy community is convinced that the man's epileptic seizure was feigned, and only done to "distract police and bystanders while assassins moved into position [just] prior to Kennedy's arrival in Dealey Plaza" (e.g., [Jim] Marrs, Crossfire, p.43).

"But...how would someone having a seizure on the west side of Houston Street have possibly distracted people in the vicinity of the grassy knoll way down Elm Street? I mean, those are the people you'd want to distract, right?

"In any event, the man was twenty-three-year-old Jerry Boyd Belknap, who was working part-time in the mail room of the Dallas Morning News at the time of the assassination. He came to Dealey Plaza to watch the motorcade.

"Belknap said he was struck by a car several years earlier, suffering a head injury that required him to take medication three times a day to avoid fainting spells, saying he did not believe the spells were any type of epilepsy.

"He neglected to take his medication on November 22, and when he felt a fainting spell coming on while waiting for the motorcade, he attempted to move back from the crowd, and while doing so, fainted and fell backward on the sidewalk.

"Belknap said that shortly after the ambulance attendants carried him on a stretcher into Parkland Hospital, President Kennedy was brought into the hospital and, he said, there was "much confusion" and "little attention" was paid to him. But he did get a glass of water from a nurse, took his medication, and when he felt much better, walked out of the hospital without ever registering as a patient, and returned to work.

"The ambulance driver, Aubrey Rike, said he was dispatched to go to 100 North Houston at 12:19 p.m., and that by the time he and his partner arrived at Houston Street, Belknap, on the ground, was conscious and had a "slight facial laceration."

"He confirmed Belknap's story about Kennedy arriving at Parkland shortly after they did, that there was a lot of confusion, and "during this confusion" the patient he brought to the hospital "walked off." (CD 1245, p.7, FBI interview of Aubrey Lee Rike; Gates with Manly, Foote, and Washington, "Bottom Line: How Crazy Is It?" p.52; see also CD 1245, pp.6, 8, for FBI interviews of two employees of the ambulance company who knew about the call for help coming in to the company. Belknap paid his ambulance bill of $12.50 on December 2, 1963.)

"With forty-four years to investigate Belknap, I'm still waiting for conspiracy researchers to connect him with the plot to kill JFK. Maybe they haven't had enough time yet to get to the bottom of it." -- Vincent T. Bugliosi; Pages 23-24 of "Reclaiming History" (Endnotes)(c.2007) 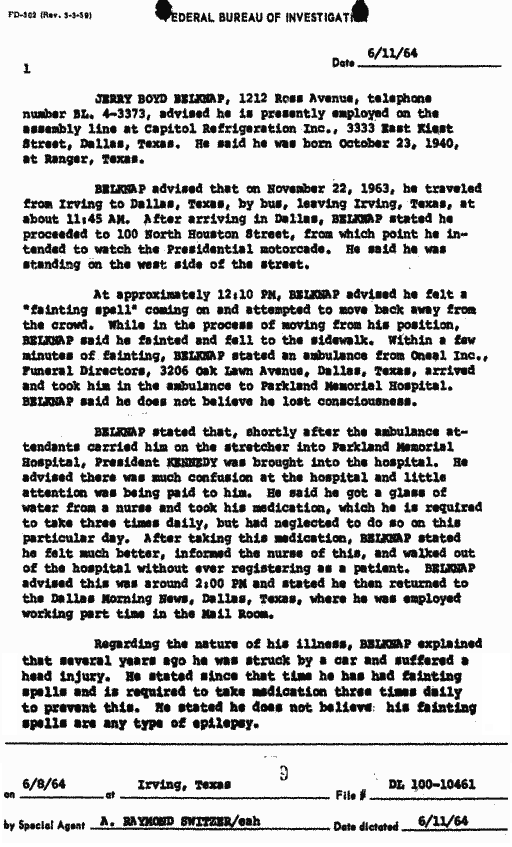