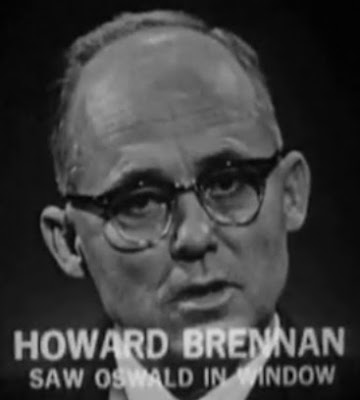 He wasn't a famous inventor, or politician, or movie star. He was an
ordinary 44-year-old man, with a wife, two children, and one grandson.
He had an ordinary job as a steamfitter for a construction company in
Dallas, Texas, when he by chance witnessed one of the most shocking
events of the 20th century -- the assassination of the 35th U.S.
President, John Fitzgerald Kennedy, on November 22, 1963.

Brennan watched with his own eyes as a gunman took aim at President
Kennedy from a 6th-Floor corner window of the old and drab-looking
building right across the street from where Brennan had secured for
himself a good place to watch JFK's motorcade as it snaked through
Dealey Plaza that balmy Friday afternoon in late 1963. Brennan was
sitting atop a low concrete wall located at the intersection of Elm
Street and Houston Street on the western edge of downtown Dallas.

Mr. Brennan would later identify the gunman he saw as 24-year-old Lee
Harvey Oswald, a minimum-wage ($1.25/hr.) stock man who had been
working for the Texas School Book Depository Company since October
16th, 1963. It was from his very workplace inside the Depository
Building that Oswald fired the three shots that changed history and
ended the life of the 46-year-old President Kennedy.

Many conspiracy theorists feel the need to attempt to discredit
Brennan's positive identification of Oswald as the Depository assassin.
They'll claim he couldn't possibly have been absolutely sure it was
Oswald shooting at the President....either because of the distance
between Brennan and the assassin's window....or because Brennan's
eyesight was supposedly very bad....or because he wasn't even looking
at the Depository when the shooting occurred at 12:30 PM (CST) on
November 22....or a variety of other convenient excuses that CTers tend
to use.

But not one of these "excuses" has been proven as fact by conspiracy
buffs....and the one about "bad eyesight" is most certainly provably
wrong. Brennan did suffer an eye injury in a sandblasting accident,
which indeed affected his eyesight, but that accident occurred in late
January of 1964, two months AFTER he witnessed Oswald kill the
President in November of '63.

Critics of Brennan's story will also usually cite the fact that Brennan
didn't positively identify Oswald in a police line-up on the day of the
assassination, which is correct. However, the critics fail to assess
the true reason as to WHY that was the case. Brennan was, initially,
just plain scared to I.D. Oswald as the man who murdered JFK. And he
said as much in his official testimony given to the Warren Commission
on March 24, 1964. He feared that he and his family might be in some
danger if the assassination turned out to be the result of some wider
plot.

Brennan's sworn Warren Commission testimony and his 11/22/63 affidavit
can be seen at the links provided at the top of this post. And it's pretty
clear that Brennan's affidavit includes a good general description of the
assassin he would later I.D. as Oswald:

Many CTers also believe that Howard Brennan is full of nothing but hot
air and that his fingering of Oswald was a direct result of Brennan
having first seen LHO on TV or in the newspapers. However, this type of
argument is cut down several pegs when Brennan's INITIAL description of
the assassin in the window is taken into account. Brennan, just minutes
after the shooting, and well before he ever saw Oswald's picture or
knew who he was, described an assassin whose general features did fit
those of Lee Oswald, which would have been a pretty amazing
coincidence, indeed, if the real killer wasn't Oswald.

It would also be truly remarkable on the "coincidence" scale if Brennan
just happened, at random, to generally describe the owner of the rifle
that was found at 1:22 PM on the very same floor of the Book Depository
where Brennan saw this man firing "some type of a high-powered rifle"
(Brennan's WC words) at the President's vehicle. The totality of
Brennan's eyewitness testimony indicates one thing -- he saw Lee Harvey
Oswald shooting a gun at JFK.

Another theory that CTers seem to like quite a bit is the one that
claims it wasn't really Brennan who gave the first description of the
Depository sniper to the police just a few minutes after the shooting.
Conspiracists want to believe, evidently, that either the police simply
made up out of thin air the description of the assailant in the TSBD
.... or .... that it was some other (unknown and never identified)
person who gave DPD Inspector J. Herbert Sawyer the description of the
killer....which was a description that almost perfectly matched the one
Brennan gave in his 11/22 affidavit.

I don't deny that there was/is some confusion regarding who exactly it
was who gave the first description of the assassin to the police (which
was the basis for the initial APB broadcast by the DPD at 12:44 PM on
11/22/63). But to believe that it was someone other than Brennan who
gave Inspector Sawyer the description of the killer is to also believe
that two strange things occurred in relation to this "other" witness
(with #2 belonging in a separate "Very Odd And Amazingly Coincidental"
category):

1.) It was a witness who was never identified (and never bothered to
come forward to be identified), even though he is providing some of the
most important info in history.

2.) This unknown witness' physical description of the assassin just
happens to perfectly coincide with the info that Brennan supplied the
police and the Secret Service and (later) the Warren Commission.

Also -- If there WAS, in fact, yet ANOTHER witness who saw the exact
same thing that Brennan saw, this would tend to buttress (even more)
the notion that Oswald, or someone who looked very similar to Oswald,
was firing from just where Brennan said the man was firing from in the
Book Depository Building.

Herbert Sawyer broadcast the following description of the assassin over
the Dallas Police radio just at 12:44 PM, just 14 minutes after
President Kennedy was shot:

"The wanted person in this is a slender white male about 30, 5-feet-10,
165, carrying what looks to be a thirty-thirty or some type of
Winchester."

Now, the "30-30/Winchester" remark indicates that the description put
out over the DPD radio by Sawyer probably came from multiple sources,
one of which (given the physical description supplied) was almost
certainly Brennan.

Plus, Sawyer's bulletin also erroneously assumed that the assassin,
after fleeing the Depository, was still "carrying" the weapon he had
just used to cut down the President of the United States. Obviously,
that portion of the bulletin turned out to be incorrect; and common
sense would also dictate that the killer (unless he was entirely
suicidal) probably wouldn't have had a desire to walk out of Dealey
Plaza while holding a rifle for all to see just minutes after the
President had been shot.

Plus -- Brennan's WC testimony indicates that he thinks he talked to
"Mr. Sorrels" right in front of the "Book Store" a mere minutes after
the last shot was fired. But we know this cannot be true -- because it
was established that Forrest Sorrels of the Secret Service did not
return to Dealey Plaza until approximately 12:50 PM to 12:55 PM.

But we also know that Brennan definitely DID talk to Forrest Sorrels at
some point on 11/22 -- because Sorrels physically took Brennan and
another witness, Amos Euins, to the Sheriff's Office to take their
statements (and Sorrels mentions Brennan's work clothes and hard hat).
So this had to be at approximately 1:00 PM, or maybe shortly
thereafter.

It's a pretty safe bet to assume that Brennan had simply mixed up the
two similar-sounding names of the officials he spoke to on 11/22
("Sorrels" and "Sawyer").

When Brennan's WC testimony is studied, we can see that Brennan ran
over to a "police officer" within seconds of the shooting -- with
Brennan asking this officer to get him "someone in charge". This
officer then leaves for a few minutes and then returns and takes
Brennan to a man who Brennan said was Secret Service Agent Sorrels
(which would be impossible if this happened within just a few minutes
of the shooting).

Inspector Sawyer said he talked to "25 to 50 different people" who
provided "information of one kind or another" in the hectic minutes
just after the assassination, and was not sure who it was who gave him
the description of the Depository assassin, which only adds to the
mystery and adds more fuel to the fire for CTers (who don't require
much of an excuse to toss Brennan's account out the window anyway).

Sawyer said the following to the WC re. the person who was the source
of the important 12:44 APB broadcast:

Another important point to be made concerning Brennan's ability to
"positively identify" people within the Book Depository from his location
across the street from that building is the fact that Brennan, minutes after
the shooting, correctly identified two of the three black men he had observed
in the fifth-floor window (directly under the rifleman's window) at the time
he had also observed the gunman on the sixth floor.

Brennan's Warren Commission testimony in that regard [at 3 H 146]:

MR. BRENNAN -- "[I] spoke to Mr. Sorrels, and told him that those were
the two colored boys that was [sic] on the fifth floor, or on the next
floor underneath the man that fired the gun."

GERALD FORD -- "You positively identified them?"

Brennan's identification of both Harold Norman and James Jarman Jr.
(the "colored boys" on the 5th Floor) is, in my view, very important
information -- because it proves beyond all doubt that is WAS, indeed,
possible for an eyewitness to positively identify specific human beings
located on the upper floors of the Depository Building from Brennan's
vantage point across Elm Street.

IMO, the weight of the evidence suggests that it was Howard Brennan, to
the exclusion of all other witnesses, who gave the police the
assassin's physical description on which Herbert Sawyer's DPD Radio APB
broadcast at 12:44 PM was based. (Not the rifle-type data, though --
because there's nothing in the record about Brennan ever saying "30-30
rifle" or "Winchester rifle".)

But, in the long run, no matter WHO it was that provided the physical
description of the assassin -- the FACT is that the description
perfectly matched the info supplied by Brennan -- which also indicates
the likelihood that Lee Harvey Oswald was, indeed, firing a rifle at
President Kennedy on November 22nd.

Howard L. Brennan's initial first-minutes-after-the-assassination,
Oswald-like description of an assassin in the TSBD, plus his later
positive identification of Lee Oswald as said assassin, plus the wealth
of additional physical and circumstantial evidence in the JFK murder
case all add up to one impossible-to-sidestep conclusion......