While looking at some documents connected with President John F.
Kennedy's assassination, I noticed this interesting item (pictured
below) -- it's Lee Harvey Oswald's application for employment at the
Texas School Book Depository in Dallas, Texas, which was filled out
by Oswald on October 15, 1963, only 38 days before he killed the
President from that very same building: 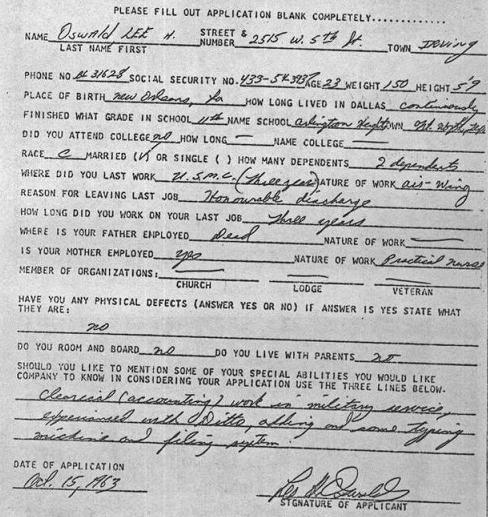 Oswald tells multiple lies in the course of filling out that application
in late 1963 -- and one lie (or at least a 'half-lie' at any rate) that
I don't even mention in my list below is the lie about Oswald getting
an "Honorable Discharge" from the Marine Corps.

Now it's true that ORIGINALLY Oswald was given an HONORABLE discharge
from the Marines in 1959. But when the USMC discovered Oswald lied
about why he wanted to get out of the Marines and return home, the
discharge was changed to "Undesirable".*

* = So there's just one more time we can label Lee Harvey as a "liar"
-- the lie he told his superiors in the Marines in '59, when he
insisted he had to return home to take care of his injured/ailing
mother, Marguerite.

However, even though Marguerite suffered a very minor injury at work
shortly before Oswald requested his discharge from the USMC (which
undoubtedly gave LHO the whole idea of using that as an excuse in the
first place), Mrs. Oswald was not disabled in any major way, and
recovered in a very short amount of time.

Marguerite's wonderful and ultra-considerate son (Lee Harvey), on the
other hand, decided he'd go to Russia just DAYS after arriving back in
the United States following his discharge from the
Marines....illustrating once more how Oswald would manipulate and use
people to serve his own needs and selfish desires.

When examining the work application pictured above (which served as
official Warren Commission Exhibit 496), let's take a quick inventory
of the several lies that Oswald serves up to Book Depository
Superintendent Roy S. Truly via that document.....

1.) Oswald lists his address incorrectly. He was really living at 1026
Beckley in Oak Cliff at the time. But, instead, lists his address as
Ruth Paine's home in Irving (where Marina was residing, but not Lee
himself). Oswald had been living at the Beckley roominghouse for just
one day prior to filling out that TSBD application (he rented the
Beckley Avenue room under the alias O.H. Lee on October 14, 1963).

So I suppose we could give Lee Harvey a break concerning this lie --
because it's possible (but not certain) that he just simply couldn't
remember the precise address of the roominghouse he just moved
into 24 hours earlier in Oak Cliff. And, perhaps, Oswald didn't feel
comfortable just leaving the "Address" line blank (or putting a question
mark in there).

2.) Re: the question "Where did you last work?", Oswald lists the
Marine Corps ("U.S.M.C."), which is a lie. Oswald had several jobs (in
Dallas and New Orleans) after leaving the Marines in 1959.

3.) Related to Lie #1, under "Do you room and board?", Oswald answered
"No" .... which is also a lie. He was "boarding" at the Beckley Avenue
roominghouse, but he evidently didn't want his Depository boss, Roy
Truly, to know he was living at a roominghouse (exact address being
known by Oswald at the time or not).

4.) He also falsely claims that he's lived in Dallas "continuously".
This is inaccurate. Within just the previous year or two, he had also
lived in Fort Worth and New Orleans.

A fifth falsehood could be added here as well, when we look at
Oswald's answer of "No" to the question on the application about
"defects". However, it does only ask about the applicant's "physical"
defects, which wouldn't, of course, take into account Oswald's warped
mental state as of October 1963.

But if the word "physical" were to be removed from that question, Mr.
Oswald would have been forced to say this in response to such an
inquiry.....

"Yes -- I'm a fruitcake, a wife-beater, a defector to Russia, and an
assassin, having attempted to end the life of a human being (Retired
General Edwin Walker), in April of this year (1963). I sincerely hope
that my tendencies toward political assassinations do not dissuade you
from considering employing me with your company. Everybody, after all,
has SOME little black marks about their persona. Mine, unfortunately,
is that I'm prone to killing top political figures. But I can push a
mean two-wheeled cart filled with books! Yours truly, Lee H.
Oswald". :)

Oswald was hired at the Book Depository that very day he filled out
that application (October 15, 1963). He started to work, as an "order
filler" [for the then-minimum wage of $1.25 per hour], the next
morning, Wednesday, October 16, 1963, which was the beginning of a new
pay period at the Depository.

Hindsight is 20/20 (obviously) -- But I look at that application form
and think: If only Mr. Truly had passed on hiring Lee Oswald. Just
think of how history would have been altered by just that one fairly-
minor (at the time) decision made by Roy S. Truly of the Texas School
Book Depository Company.

Oswald, of course (who knows), might still have found some way to kill
President Kennedy on 11/22/63 as the motorcade made its way through
the Dallas, Texas, streets. But that is doubtful, since he probably
would not have had the golden opportunity that he was presented with
by being employed in a tall building right along the parade route.

I often wonder, though, if Oswald just might have tried to find a way
to use his Carcano rifle that November day, even if he hadn't been
employed at the Depository. That "What If?" is not of any significance
now, of course, but is something to ponder upon occasion.