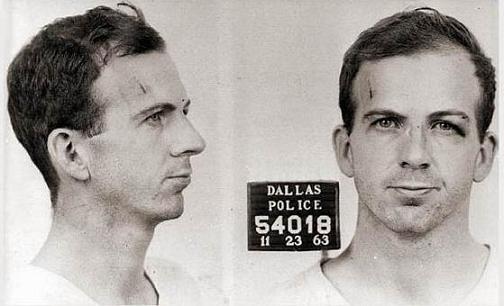 While it might very well be true that Lee Harvey Oswald, the accused
assassin of President John F. Kennedy, would have avoided being
convicted in a court of law of the two murders he was charged with
committing on November 22, 1963, in Dallas, Texas (JFK's killing, plus
the murder of police officer J.D. Tippit as well) -- due to some
inadmissible evidence in the case or some other unknown reasons we can
only guess about now -- this by no means indicates that Oswald was, in
any way, "innocent" of those two first-degree murders.

But, of course, fate stepped in on 11-24-63, when Jack Ruby fired a
well-placed single bullet into the mid-section of Mr. Oswald while
Oswald was being transferred from one jail facility to another, causing
Oswald's death just 48 hours and 7 minutes after JFK was pronounced
dead.

So, the trial of Lee Harvey Oswald was forever postponed and, with
Oswald's death, many questions that only LHO himself could address
remain unanswered -- such as the exact reason he killed President John
Kennedy.

But even without such answers from the lips of the defendant in this
double-murder case, the overall evidence against Oswald is absolutely
overwhelming in virtually all respects.

Let's just focus on the many LIES that came out of Oswald's mouth after
he was picked up in a Dallas movie theater on suspicion of being
Officer Tippit's killer.

Now tell me, please, if Oswald was innocent of two murders on November
22nd, WHY does he lie and lie some more to the authorities (and to the
press as well) during his two-day detention? Would a truly innocent
person HAVE to lie this much?

In addition to the wealth of lies he spouted to police while being
interrogated, we also have Oswald ON TAPE (on Live TV) telling lie
after lie in front of an audience of millions of television viewers.

Examples of Oswald's known lies told to the world via live TV:

1.) "I didn't shoot anybody; no sir." ..... This is an obvious lie
based on the evidence in the case; even if you wish to EXCLUDE the JFK
murder; because there's NO question about his guilt in the Tippit
killing. Many witnesses positively identified Oswald as Tippit's
murderer.

2.) "They've taken me in because of the fact I've lived in the Soviet
Union. I'm just a PATSY!" ..... Apart from the fact the "Patsy" comment
was uttered by Oswald immediately after what can be PROVEN to be a lie
(indicating, IMO, that the whole "Patsy" thing has been severely
distorted by theorists over the years; i.e.: Oswald is AIMING the Patsy
remark at the Dallas Police Department, NOT any unknown conspirators
who have just framed him for the murder of JFK) -- there's that first
portion of this "DPD Hallway Declaration" itself. Oswald KNEW full well
that the "Soviet Union" malarkey was pure balderdash. He HAD to know
that his "Soviet Union" excuse was NOT the reason he was "taken in" by
Dallas police -- if for NO OTHER REASON, he would know he was arrested
for trying to shoot policeman McDonald while in the theater AND
punching the same officer in the face! That's even IF he didn't realize
the REAL "reason" he was arrested (which he obviously HAD to know as
well -- because we know he killed Tippit 30 minutes earlier).

3.) "I don't know what I am here for." ..... Along the same lines as
above -- this is more Oswald BS. He knew full well what he was there
for. Again, even if you don't want to think he had anything to do with
JFK's death; this statement out of Oswald's mouth is a lie (based on
the theater scuffle and the Tippit murder).

4.) "I don't know what dispatches you people have been given, but
I emphatically deny these charges!" ..... "Denying these charges"
(i.e.: saying he is "not guilty" of both murder charges) indicates
another obvious lie, based on just the Tippit crime all by itself --
and double the lie when you factor in the Kennedy murder charge.

5.) "I was denied counsel during that very short and sweet hearing."
..... Yet another false statement. Oswald was not denied counsel (at
any time). He even telephoned Ruth Paine and had her try to contact a
specific attorney in New York. The police, therefore, were allowing
Oswald to call for legal assistance ANY TIME HE WANTED TO DO SO.

Dallas Homicide Captain J. Will Fritz, via his Warren Commission testimony
in 1964, verified that Oswald was never denied the right to legal counsel:

Mr. Ball -- "Did you say anything to him about an attorney the first
time you talked to him?"

Now we obviously don't know the full extent of the dialogue between Lee
Oswald and the police/FBI/USSS, et al, because nothing was recorded or
taken down by stenographers (silly, I will admit; but this was
apparently per their REGULAR policy, circa 1963; idiotic though it
seems to be now, especially since the suspect was himself killed 48
hours later).

But when we start to examine the lies Oswald told to the police behind
closed doors -- there are many. (And I have NO reason to believe that
people like Will Fritz, Henry Wade, Gerald Hill, C.T. Walker, James
Leavelle, and Jesse Curry had even the slightest of motives to desire
to cover up any evidence in this case. And nobody can prove any of
these officials DID do just that.) .....

Lie #3.) Oswald's verifiable lie about the "Backyard Photos" being
"fakes". This, we know, is an outright falsehood based on the fact that
OSWALD HIMSELF signed the back of one of these "Backyard" pictures that
wasn't even discovered until 14 years later!

Lie #4.) Oswald's lie about having lunch with fellow Texas School Book
Depository employees on 11/22. --- This one has subtle variations, of
course, depending upon which officer is doing the telling --
indicating, obviously, that either the officers' notes and/or
recollections were slightly off on this point, or (more likely) that
Oswald couldn't get his own story straight regarding his alibi. It
boils down, though, to Oswald saying he was on the 1st or 2nd Floor of
the Depository building at the time of the shooting, either with other
employees or by himself. NOT ONE PERSON, however, can verify that
Oswald had lunch with ANY other employees, AND we have ZERO
eyewitnesses that place Oswald anywhere but on the 6th Floor with a
rifle at the exact time of the assassination (12:30 PM).

Lie #6.) "Policeman been killed?" -- LHO; 11/22/63 .... Like #5, this
quote from Oswald was said in the police vehicle after LHO's arrest.
Obviously, it's another falsehood, because if ANYONE in Dallas knew if
a "policeman {had} been killed", it was Lee Harvey Oswald.

Lie #8.) Oswald lied about the "O.H. Lee" registration name he gave to
Mrs. Roberts and Mrs. Johnson at his roominghouse on Beckley Avenue.
LHO, however, signed his name "O.H. Lee" at the Beckley residence.

* = Number nine might not actually be considered a direct "lie" in
Oswald's mind...that is, if he was of the peculiar opinion that
shooting down both the President of the United States, as well as a
policeman, like mad dogs in the street were actually things to be proud
of.

Apart from these known lies told by Oswald during the short time he was
in police custody, virtually all other evidence (admissible in a court
of law or not) shows Oswald to be guilty as well. Sure, some of it
would probably not be allowed in at a trial for one technical reason or
another -- but the vast majority of the physical and circumstantial
evidence in the JFK case points only in one single direction -- and it
ain't to Carlos Marcello, Santo Trafficante, or Jimmy Hoffa. Instead,
it points directly at 24-year-old Lee H. Oswald, whose very own rifle
was found in the building where he worked (the Book Depository).

Legal technicalities or not -- Lee Harvey Oswald was guilty as sin of
two murders in November of 1963. 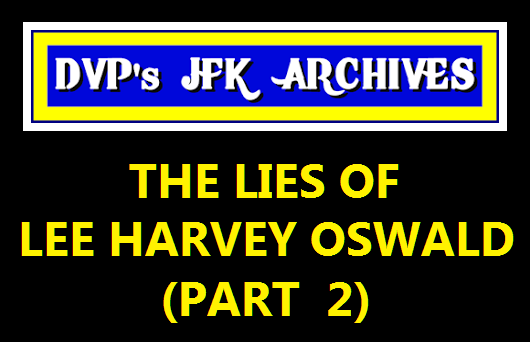