Conspiracy theorist James DiEugenio was interviewed by Jim Fetzer on
December 16, 2009. During the last few minutes of the interview, the
subject of the backyard photos came up, with both DiEugenio and Fetzer
(predictably) claiming that the pictures are frauds, and claiming that
the recent study done by a Dartmouth professor is all wet.

It just makes me wonder HOW MUCH PROOF OF AUTHENTICITY it takes for
these conspiracy clowns to finally admit that the backyard pictures of
Lee Harvey Oswald are genuine, unaltered photographs?

Firstly, of course, there was the investigation of this matter done
way back in 1964 by the Warren Commission (see the Warren Report,
beginning at page 592, linked HERE).

During his work for the Warren Commission, photographic expert Lyndal
Shaneyfelt of the FBI concluded beyond all doubt that the negative to
the backyard photo known as CE133-B (which is a negative that was
recovered from Ruth Paine's garage along with two of the backyard
photos themselves, CE133-A and CE133-B) was positively a negative that
came from Lee Oswald's very own Imperial-Reflex camera to the
exclusion of all other cameras ever made.

Therefore, CE133-B is NOT A FAKED, FORGED, FRAUDULENT, or COMPOSITE
photograph. Period.

And if CE133-B is not a fake or a composite photo (and it certainly
isn't), then NONE of the other backyard photos depicting Lee Oswald
with a rifle and a revolver and two newspapers are fakes either.

Or do some conspiracists actually want to believe that only SOME of
the existing backyard pictures are forgeries, while one of them is the
real deal and genuine? Such a strange belief, of course, is just
downright silly.

In addition to Shaneyfelt's determination regarding the negative to
CE133-B having positively been taken with Oswald's very own camera,
there is, of course, the testimony of the person who admitted to
having taken the backyard photos--Marina Oswald.

Marina has said on multiple occasions that she positively remembers
taking pictures of her husband, Lee, while Lee was dressed all in
black and was holding a rifle and some newspapers. As recently as
November 30, 2000, Marina told a researcher (Vincent Bugliosi) that
she had, indeed, taken the backyard photos herself.

Plus, there is the re-creation of the backyard photos that was done by
CBS-TV in 1967 for the June '67 CBS four-part special "A CBS NEWS
INQUIRY: THE WARREN REPORT".

During the photo re-creation, a man went to the location where Marina
Oswald took the backyard pictures (214 Neely Street in Dallas, Texas)
to see if an exact replica of the original photos could be achieved.

The end result of the photo re-enactment was that the shadows that
appear in the 1967 photo were EXACTLY THE SAME as they appear in the
1963 Oswald backyard photographs, right down to the ANGLED body shadow
and the STRAIGHT nose shadow. [See the photo comparison below.] 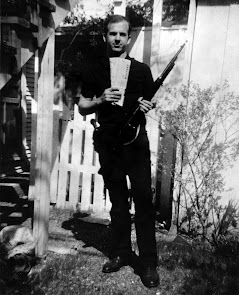 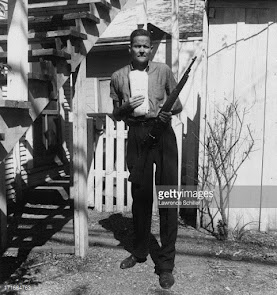 The 3/31/67 photo reconstruction, which was an actual AT THE NEELY
STREET SITE test (not just a test done on paper or on a computer),
verifies beyond all possible doubt that the shadow patterns exhibited
in the 1963 Oswald backyard photos are perfectly consistent with
shadows that exist in a photo that was taken in 1967 for comparison
purposes.

Do conspiracy theorists now want to believe that the 1967 CBS photo
(which contains the exact same shadow pattern as the LHO photos) is a
fake and a fraud too? If not, then how can conspiracists continue to
cry "foul" when it comes to one of their favorite gripes--the so-
called "shadow problems" with the LHO backyard photos?

Mr. DiEugenio and Prof. Fetzer should watch the video embedded
below (culled from the 1967 CBS-TV special). It forever debunks the
conspiracists who continue to insist that the backyard pictures are
phonies based on any kind of "shadow" anomalies or discrepancies: 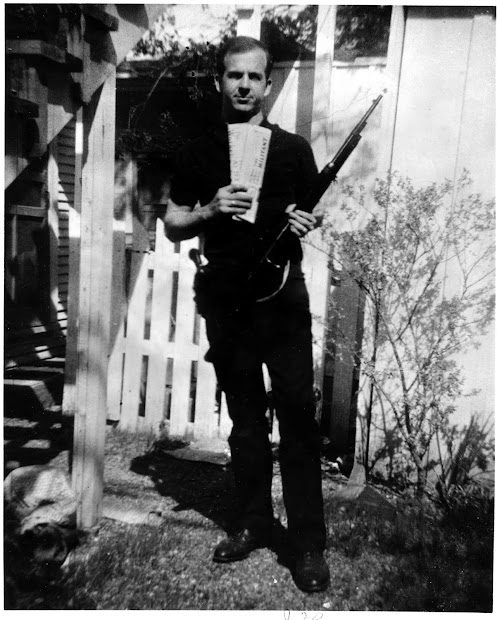 In light of all the rock-solid evidence (such as the evidence mentioned
above) that indicates beyond all reasonable doubt that the "backyard
photographs" of Lee Harvey Oswald have not been tampered with,
conspiracy promoters who continue to want to peddle the theory that
the photos are fakes are merely living in a dream world....a world
where their conspiracy-filled fantasies have somehow been able to
trump the known facts.