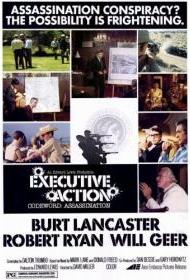 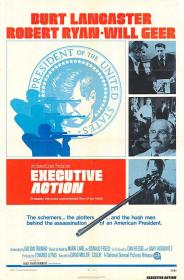 The 1973 feature motion picture "Executive Action", which is based on a book co-written by famed JFK conspiracist Mark Lane, stars Burt Lancaster, Robert Ryan, and Will Geer as three top-level (but never fully-defined or fleshed out) behind-the-scenes plotters who are secretly arranging President John F. Kennedy's demise via a "Three-Gunmen, Single-Patsy" assassination ambush, which is to take place at Dealey Plaza in Dallas, Texas, during President Kennedy's visit to that city on the tragic date of November 22, 1963.

Now, where have I seen that type of "plot" being proposed before? Oh, yes, Oliver Stone's the man. He's got exactly the same type of crazy three-shooter, ONE-"patsy" scheme cooked up for his blockbuster motion picture, "JFK", which premiered almost two decades after "Executive Action".

I guess the three assassins who were popping away at JFK's head (as depicted in both "EA" and "JFK") just prayed that the rotten and corrupt U.S. Government would be wanting to frame the very same patsy named Oswald after the bullets stopped flying in Dealey Plaza.

Otherwise, I cannot see how on the face of this globe that Mr. Lancaster, et al, could have thought they had a snowball's chance in Hades of their loony THREE-gun plan being successful.

Oh, well....I guess we'll just let the Government worry about those trivial little details, like covering up or getting rid of all the bullets and bullet holes in JFK's body that didn't have any chance of being traced back to the one lone "patsy" in the Texas School Book Depository Building on Elm Street.

One of the few redeeming features in this fairy-tale of a movie is some very nice aerial footage taken of Dealey Plaza and the Book Depository (filmed from a helicopter in early 1973).

The large "Hertz Rent-A-Car" time-and-temperature sign was still atop the Depository Building when that impressive overhead footage was filmed. The Dealey Plaza aerial scene in this movie looks very similar to this 1967 photograph.

The bulk of this conspiracy-oriented film is total fiction, but unlike Oliver Stone's tripe that would surface 18 years later, the producers of "Executive Action" were at least honest and forthright enough to tell their audience right from the very beginning of the movie that "much of this film is fiction". During the opening credits, we find these words printed on the screen.....

"Although much of this film is fiction, much of it is also based on documented historical fact. Did the conspiracy we describe actually exist? We do not know. We merely suggest that it could have existed."

A fatal flaw within the type of script that a film like "Executive Action" heavily relies on is that Lee Harvey Oswald (the so-called "patsy" in this film as well as in Oliver Stone's "JFK" eighteen years later) has been almost completely lost within the sea of unsupportable and invented conspiracy-tinged speculation. At the very least, Oswald has been severely misrepresented in films like "Executive Action" and "JFK".

In both of those movies, in fact, the very important fact of Lee Harvey Oswald carrying a bulky paper package with him into his workplace at the Book Depository on the morning of the President's assassination (after Oswald's unusual weeknight trip to the Dallas suburb of Irving the night before to visit his wife at the home of friend Ruth Paine, where LHO's rifle was known to be stored) is not mentioned at all.

This key piece of circumstantial evidence, that brown paper bag, which certainly leads more towards Oswald's guilt than it leads towards him being a completely-unwitting "patsy" in JFK's murder, is completely ignored in "Executive Action" and in Oliver Stone's motion picture "JFK" as well. And that, IMO, is just flat-out ridiculous oversight. Or, more likely, it's a deliberate willingness on the part of the filmmakers to rewrite history with respect to the true facts surrounding the murder of an American President.

Pro-conspiracy movies like "EA" and "JFK" rely almost exclusively on fanciful guesswork, plus enormous amounts of supposition with respect to the actual mechanics of how Kennedy was murdered, and a perceived motive that 'so-and-so' supposedly had for wanting the President of the United States killed in November 1963.

In "Executive Action" (which made its debut in U.S. movie theaters on Wednesday, November 7, 1973, fifteen days prior to the 10th anniversary of JFK's death), we're told that the bottom-line motives that these fictional bigshots in the movie had for desperately wanting JFK dead were: Vietnam, Kennedy's civil-rights policies, and JFK's negotiations with Soviet Premier Nikita Khrushchev (specifically, the Nuclear Test Ban Treaty was being frowned upon in a big way by the assassination plotters). God forbid that peace should prevail in the world, huh?

But, amid the conspiracy plot being hatched by Burt Lancaster and Company, the personality of John F. Kennedy's real killer, Lee Harvey Oswald (and LHO was, indeed, Kennedy's lone assassin based on every scrap of hard evidence to be found when investigating the JFK case), has been pretty much totally lost and/or ignored by the filmmakers.

And that's truly a shame. Because if there was ever a person who had the perfect profile and personal make-up of a potential Presidential assassin (a real assassin/triggerman, that is, and not just a person to use as a "patsy"), it was probably 24-year-old Lee Harvey Oswald.

For a balanced counterpoint to movies like "Executive Action" and "JFK", I'd highly recommend watching the 1964 documentary film "FOUR DAYS IN NOVEMBER".

I'd also recommend reading two books, Vincent Bugliosi's "RECLAIMING HISTORY" (2007) and Jean Davison's "OSWALD'S GAME" (1983), both of which are a mile deep in something called the "true facts" surrounding the events of 11/22/63, and both of those books are also richly steeped in the largely-overlooked truth about a man named Lee Harvey Oswald, who was the man that owned the Mannlicher-Carcano rifle that was proven to have killed President Kennedy.

This first-ever DVD release of "Executive Action" includes an interesting bonus supplement in the form of a 10-minute "Vintage Featurette" entitled "November 22, 1963: In Search Of An Answer".

That featurette is a pretty good behind-the-scenes type of program, with 1973 interviews with the film's main stars (Lancaster, Ryan, and Geer), plus interview segments with producer Edward Lewis and screenplay writer Dalton Trumbo as well.

The Warner Home Video DVD (which came out on October 23, 2007) also includes one additional bonus item, a "Burt Lancaster Trailer Gallery", which consists of
four theatrical trailers for films starring Mr. Lancaster, including the original trailer for "Executive Action" and one for the similarly-themed "Seven Days In May" (1964).

This DVD presents "Executive Action" in good-looking Anamorphic Widescreen (1.85:1 aspect ratio), with a Dolby Digital 1.0 Mono soundtrack (English only). Subtitles are provided in English and French.


11/22/73 NEWSPAPER ARTICLE ABOUT THE FILM
(click on the picture for a bigger view): 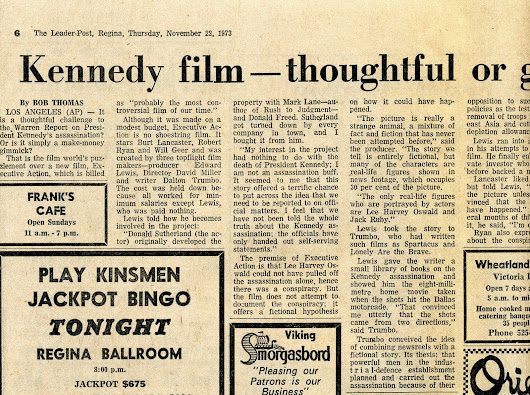