OSWALD WAS IN
THE SNIPER'S NEST 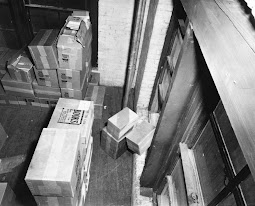 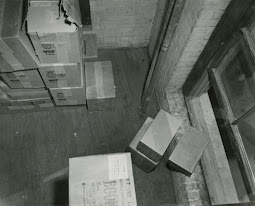 HARD, SOLID, COMMON-SENSE VALIDATION THAT
LEE HARVEY OSWALD WAS IN THE BOOK DEPOSITORY'S "SNIPER'S NEST" AT 12:30 PM ON NOVEMBER 22, 1963

Many, many people believe Lee Harvey Oswald was completely innocent of
murdering President Kennedy in November of 1963. They think Oswald was
nothing more than an unwitting "Patsy", set up and framed to take the
fall after the tragic assassination of America's 35th President.

This "Patsy" viewpoint is just pure nonsense, IMHO. There is so much
evidence verifying Oswald's guilt (evidence that any "Patsy plotters"
themselves could not possibly have "controlled"), that any such "Patsy"
notions fall completely apart upon even a cursory glance at the
evidence in the case.

Oswald's own rifle was found on the 6th Floor of the Texas School Book
Depository Building. .... Oswald (or someone who resembled Oswald) was
seen by witnesses in the sniper's window on that same 6th Floor. .... And
Oswald's fingerprints were found on boxes within the Sniper's Nest.

In addition to the above, there's also another very incriminating set of
Oswald prints found on that sixth floor of the Depository:

Oswald's fingerprints were on the homemade paper bag which was found
right next to the Sniper's Nest window. ..... This information re. the
bag is detailed on Page #135 of the Warren Commission Report.

Three different fingerprint experts identified the TWO prints lifted
from the paper bag as those of Lee Harvey Oswald. Sebastian F. Latona
of the FBI first IDed the prints as positively being Oswald's. Then, in
a separate independent examination of the prints found on the bag, two
other experts (Ronald G. Wittmus of the FBI and Arthur Mandella of the
New York City Police Dept.) came back with the very same results.

It's also very interesting to note just exactly which prints of Oswald's
were discovered on the paper bag and WHERE, in particular, one of the
prints was located. The two prints discovered on the bag were Oswald's
left index finger and the other (the key one in a crucial respect) being
Oswald's right palmprint.

LHO's right palmprint was found on the END of the CLOSED side of the
bag -- indicating that Oswald had held the bag in such a manner where
his right palm was supporting the weight of whatever was inside the bag,
just exactly matching Wesley Frazier's testimony of how Oswald carried
the bag into the TSBD back entrance the morning of November 22 [2 H 239].

Via Wesley Frazier's Nov. 22 affidavit (providing solid evidence that
Oswald did, indeed, WALK INTO the back door of the Depository WITH
PACKAGE IN HAND, rather than empty-handed) --- "I saw him go in the
back door at the Loading Dock of the building that we work in, and he
still had the package under his arm."

In my view, this valuable and incriminating evidence against Oswald is
quite possibly the BEST "print" evidence there is in the whole case.
Oswald's own prints being found on his very own rifle ARE rather
incriminating, yes. But, as conspiracy promoters like to point out with
zealous glee, it's possible that the print taken from the rifle by the
DPD might have been left there by Oswald at some time prior to November
22 (since he was the owner of the weapon since March of 1963).

And the other hard, physical evidence that exists (fingerprint-wise)
suggesting very strongly that Oswald was at the sniper's window at
some point on November 22nd is the evidence of Oswald's prints (three
of them) being found on two of the boxes that were found INSIDE THE
SNIPER'S NEST ITSELF [see CE1301 and CE1302].

This "box" evidence is very strong to support the idea that Oswald was
present at that southeast corner window on Nov. 22nd, but (as CTers
will also point out) it doesn't HAVE to mean that LHO "constructed" the
"Nest" or that he was at the window with a rifle at precisely 12:30 PM
shooting at anybody. This due to the fact that, as an "order filler" for
the Depository, Oswald obviously COULD conceivably have touched
or handled those exact cartons sometime prior to the assassination.
Although the LOCATION of the prints on the cartons, IMO, is quite
compelling and interesting (in an "Oswald-did-it" kind of fashion).

PLUS: As I said, the cartons with LHO's prints were NOT just the
cartons stacked high up all around the "Nest" (i.e., the "shielding"
cartons on the outside of the SN).

But, instead, the Oswald prints were found WITHIN the Nest itself --
on the box the sniper would have used to probably SIT on while
aiming his rifle; AND two prints on one of the exact boxes that was
used as a 'rifle rest' by the assassin.

I'd like to know the odds that ONLY Oswald's prints would have been
found on those PRECISE boxes, while no other DISCERNIBLE prints could
be lifted off of them?

Did the "plotters" who many conspiracy theorists say framed Oswald
as their patsy just get extremely lucky and PICK AT RANDOM two boxes
to place INSIDE the bowels of their Sniper's Perch which just happened
to have three of Lee Harvey Oswald's prints on them?

Just exactly HOW did these crack conspirators orchestrate this "plan"
so perfectly to ensure that ONLY OSWALD'S fingerprints and palmprints
would be found on those particular boxes? How did they KNOW for certain
which cartons on the sixth floor Oswald touched and which ones he had
not handled? More incredible foresight on the part of the plotters it
would appear.

The fingerprints on the paper bag are also very damaging to Oswald
and indicative of guilt (more so than even the prints on the rifle or his
prints on the boxes), because it places Lee Harvey Oswald -- via his
identifiable, verifiable fingerprints -- at just EXACTLY the same location
where three cartridge cases were also found (with all of these shells
being linked to Oswald's rifle) and just exactly the same location --
the 6th-Floor Sniper's Nest -- where witnesses saw a man who
resembled Oswald.

Plus: The "bag" prints place Oswald's fingerprints on an item (the
brown bag) that has no logical or explainable or valid reason to be
where we find it after the assassination -- just lying on the floor below
the window from where rifle shots were fired at President Kennedy.

I cannot see ANY possible wiggle room for CTers with regard to this
very strong fingerprint evidence on the paper bag itself -- given the
location of the prints on the bag, plus WHERE the bag was found, plus
Wesley Frazier's testimony about seeing Oswald carrying a very
similar-looking paper bag into the Depository at approximately 8:00 AM
on Nov. 22nd, plus the OTHER "Oswald print" evidence found on the very
same sixth floor (on the rifle itself and on the two SN boxes).

HOW can this evidence be twisted and turned into a conspiracy-favoring
argument which has Oswald NOT at that Sniper's Nest window at some
point during the day of November 22, 1963? How?

Do conspiracy buffs think that Oswald just happened to unwrap his
"curtain rods" right beneath the sniper's window, and then just left
the bag in the Nest (and also, evidently, just DITCHED these "rods"
somewhere, because we know he didn't enter his roominghouse with
any curtain rods at 1:00 PM; nor were any rods found inside the TSBD
after the shooting)?

One way some conspiracy kooks have tried to wrangle out of Oswald's
obvious guilt and obvious presence at that 6th-Floor window on 11/22/63
has been to claim that the Dallas Police "planted" the bag underneath
the sniper's window after the shooting in an effort to frame Oswald.

This theory is about as believable as the "Patsy" theory as a whole (which
is wholly-UNBELIEVABLE right from the get-go, IMO). Because -- we'd
then have to believe that the DPD had somehow been able to "plant"
Oswald's prints on a "fake" bag (without any non-plotters noticing of
course, as per the norm with ALL conspiracy theories -- no non-conspirators
ever notice a thing, amazingly).

Or, we'd have to believe that the DPD just MADE UP from whole cloth the "fingerprints" story concerning the bag. Which, of course, also must mean
that the THREE fingerprint experts mentioned earlier (Latona, Wittmus,
and Mandella) are part of the "Frame The Patsy" plot, because they ALL
three said they had examined the bag [CE142] and found Oswald's prints
on that particular brown paper bag.

I'm eagerly awaiting the logical and believable explanation from
conspiracy theorists that will answer the question of why that 38-inch
brown paper sack (which could house Oswald's 34.8-inch disassembled
rifle [as we can see here]), with Oswald's fingerprints on it, was in the
place where it was found after the assassination -- the Sniper's Nest --
and yet still NOT have Oswald present at the Sniper's Nest window on
November 22nd, 1963.

I, for one, cannot think of a single "Oswald's Innocent" explanation for
that bag being where it was found after the shooting, and with Lee Harvey
Oswald's fingerprints on it.

MORE PHOTOS OF THE SNIPER'S NEST: