Let me try to get a firmer grip on what you think you've "debunked"
with respect to Dale Myers' "Secrets Of A Homicide" 3D computer
model.....

You're contending that Myers fudged some data, or skewed a limousine
measurement (the "Number of inches the jump seat was from the right
door" measurement, that is)....correct?

And Pat stated the following in an earlier Internet post:

"[Dale K. Myers'] animation deceptively depicts an under-sized
Connally model on a seat 3.5 inches further from the door than the
seat occupied by the flesh and bone Connally, and...when these
mistakes are corrected, the bullet exiting Kennedy's neck strikes
Connally in the middle of his back." -- Patrick Speer; 04/18/08

Therefore, per Pat's above quote, if Mr. Myers were to have slid John
Connally's jump seat inboard a total of only 2.5 inches from the right
door (vs. the "6 inches" that Thomas Kelley of the Secret Service
testified was the distance between the right door and the jump seat
and is the "6-inch" measurement that Pat Speer is claiming that Myers
DID utilize for JBC's seat in Dale's 3D computer model), this would
then mean that Governor Connally would have been struck by the bullet
"in the middle of his back".

But if Myers utilizes the "6 inches from the door" measurement for
JBC's jump seat, it would mean that Myers is able to get the bullet
wound placed properly at the FAR RIGHT portion of JBC's back (near the
armpit, which, of course, is where he was hit by a bullet).

Is that correct, Patrick?

Well, after mulling over these two options afforded Mr. Myers and his
animated computerized model, I think Mr. Patrick Speer might have a
very big problem when trying to reconcile this possible "3.5-inch"
error into any kind of a BIG DEAL or a "lie" by Mr. Myers at all.

Why do I say that?

Well, mainly because of John Bowden Connally and the known bullet
wounds in his body....i.e., we KNOW that Governor Connally was struck
in THE BACK by only ONE single bullet on 11/22/63. And we know where
exactly that entry wound was located (far-right part of the back, near
the right armpit).

So, even if some conspiracists want to argue that JBC was hit by more
than one bullet (total), there hasn't been a single CTer on the planet
(that I'm aware of) who thinks that Connally was struck IN THE BACK by
more than one single bullet.

Therefore, it seems as though Mr. Speer's whole argument falls flat
and is rendered very nearly moot and meaningless.

VIA EITHER OF THE DISPUTED JUMP-SEAT MEASUREMENTS (either the 2.5-inch
measurement or the 6-inch version), it's obvious that John Connally
WOULD STILL HAVE BEEN HIT BY THE BULLET THAT EXITED JOHN KENNEDY'S
THROAT.

And that is a shooting scenario (i.e., a "Single Bullet Hitting Both
Men" scenario) that very few conspiracy theorists embrace at all,
regardless of WHERE exactly the jump seat was located.

But Mr. Speer is telling us, it seems to me, that John Connally is
certainly going to be hit in the back by the bullet coming out of
JFK's neck no matter WHERE the jump seat is situated.

And as far as that argument goes, I'd fully agree with him....because
given the alignment of the two victims in the car....plus the fact
they were each struck by a bullet that entered their UPPER
BACKS....plus the fact that a bullet almost certainly (beyond a
proverbial "reasonable doubt") went clean through John Kennedy's body
on a downward trajectory from back to front -- there was simply
nowhere else for that bullet to go except into JBC's back after
leaving JFK's body.

I'll repeat this once again (which I've stated numerous times in the
past) -- It's always been my firm belief that a few things regarding
the SBT and its details can NEVER be fully known with 100% certainty,
with one of the most-crucial of these "unknowable" things being the
exact orientation of the victims' bodies to one another at the precise
moment the SBT bullet struck them at Z223-Z224 (due to the built-in
and obvious analytical limitations of Abraham Zapruder's two-
dimensional motion-picture film).

I'd also like to point out the following Dale Myers' quote, which can
be found on Mr. Myers' website (concerning the "margin of error"
within Dale's computer animation project):

"From about Zapruder frame 240 through 360, the effect of film
grain on the ability to position the occupants in the car accurately
is negligible. At their farthest point from Zapruder's camera, it was
possible to rotate both JFK and JBC up to 6 degrees in any direction
without a perceivable mismatch with the original film. This amount of
error dropped to about 4 degrees by Zapruder frame 190 and within 3
degrees by Zapruder frame 223. Therefore, the ESTIMATED MARGIN OF
ERROR [Myers' emphasis] lies between 3 and 6 degrees, depending on
which point in the film is under discussion. The larger figure was
used to calculate potential errors in plotting trajectories." -- Dale K. Myers

Should we tell Bugliosi that his defense of the single-bullet theory was in large part based on the "erroneous premise" that the jump seat was 6 inches inboard of the door? Or should we assume that Myers, who, after all, was on Bugliosi's payroll, has already set him straight?

Well, if I were to hazard a guess at what Mr. Bugliosi's reaction
would be to the "Distance From The Right Door" controversy (and I
don't deny there IS definitely a discrepancy in the official records
regarding the precise distance between the door and the jump seat,
with Thomas Kelley and Tom Canning saying one thing, and the Hess &
Eisenhardt body draft saying something else) -- I'd wager that Vince
just might say something like this:

Well, even if you're right and Dale Myers is wrong by 3.5 inches
-- where does your argument really take you? Does it "go anywhere" --
except to a different theory that STILL HAS JOHN CONNALLY BEING HIT IN
THE BACK BY THE SINGLE BULLET THAT EXITED THE FRONT OF KENNEDY'S NECK?

I'd like to also offer up something else here:

Take a look at the animated image below (which comes
from this page of Dale Myers' website): 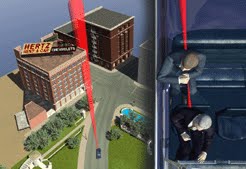 In the above computer-animated image, it looks like Connally's jump
seat is very close to the right door of the car. It doesn't look like it's
any "6 inches" from the door anyway--does it?

I cannot deny that it's my impression that Mr. Myers DOES seem to
slide JBC's seat more than just 2.5 inches inboard from the right door
in the 2004 Discovery Channel documentary (and, as Pat has also said,
the same thing seems to occur in the 2003 ABC-TV special as well,
unless my eyes are deceiving me in some manner).

But when looking once again at the photo above from Myers' website,
and focusing on the "Trajectory Cone" --- if Connally's seat is slid
further inboard than Mr. Myers has it in that photo, it would mean
that the "trajectory [margin-of-error] cone" would have to be
shifted slightly to the WEST on the Dealey Plaza compass.

Exactly how far west it would need to be shifted and adjusted, I don't
know. I'm just guessing. But we can see that by moving the cone
westward, it completely eliminates the Dal-Tex Building as a source
for the SBT shot, and any such adjusted "cone" could very likely still
include Oswald's Sniper's-Nest window in the Depository.

In any event, any trajectory cone that is shifted WESTWARD would
include ONLY windows in the Book Depository and no other building at
all in the whole of Dealey Plaza.

And since the ONLY KNOWN AND CONFIRMED SOURCE OF GUNFIRE in Dealey
Plaza was the "Oswald window" on the 6th Floor of the TSBD, the "Where
Could The Shot Have Come From?" math becomes fairly simple at this
point (even WITH an "adjusted" trajectory cone).

Or do CTers want to place a SECOND gunman somewhere on the upper
floors of the Depository (to accommodate this different "trajectory
cone" I'm theorizing about here)? Maybe Elsie Dorman was firing a gun
at JFK from her fourth-floor perch, as well as filming the motorcade
at the same time.

Therefore, in the final analysis (which certain CTers will undoubtedly
refer to as another "strawman" argument; but I'd prefer to think of it
as a "common-sense" type of argument instead), even WITH a possible
(but not proven) "3.5-inch" jump-seat discrepancy in Mr. Myers'
computer animation, the Warren Commission critics still don't have
ANYWHERE TO GO with their anti-SBT arguments and theories.

As mentioned earlier, about the only places they can go with this
discrepancy, it seems to me, is to a bullet that STILL GOES INTO JOHN
CONNALLY'S BACK, with that bullet STILL BEING FIRED FROM THE BOOK
DEPOSITORY BUILDING as well.

When confronted with the clothing evidence, Dale K. Myers created animation depicting JFK's jacket collar elevated an inch up into the hairline -- an obvious fiction!

The clothing seen in Dale Myers' computer animation is MEANINGLESS. The clothes have NOTHING to do with where the bullet hole is located IN KENNEDY'S UPPER BACK in Myers' computer model. Myers added the clothing for cosmetic purposes only. So the amount of "bunching" that Myers places on JFK's jacket does not mean a thing. It's merely to make the animated figures look more realistic.

(See the last paragraph in the image below, which is from this FAQ page on Myers' website.) .... 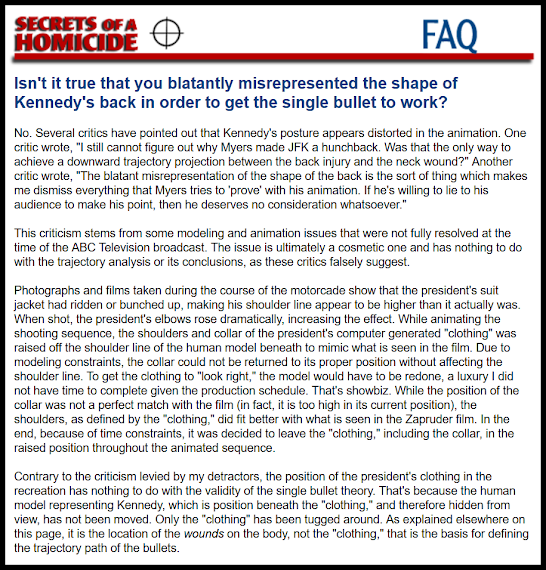 http://JFK-Archives.blogspot.com/Dale Myers And The SBT (Part 1)