His [Dale K. Myers'] animation deceptively depicts an under-sized Connally model on a seat 3.5 inches further from the door than the seat occupied by the flesh and bone Connally, and that, when these mistakes are corrected, the bullet exiting Kennedy's neck strikes Connally in the middle of his back.

Pat Speer's 3.5-inch differential regarding the jump-seat measurement is (as is usually the case with conspiracy theorists) a lot of "to-do" about nothing.

Because even if John Connally's jump seat was, indeed, located only 2.5 inches from the right door of the limousine (and apparently that might very well be the accurate measurement, based on the diagram linked below)*, the bullet that went clear through President Kennedy's body and positively "made its exit through the anterior surface of the neck" (a quote from JFK's official autopsy report) was a bullet that had no choice but to strike either John Connally's body or the interior of the limousine (given the bullet's downward trajectory which was taking it right toward the middle of the vehicle).

And since we know that the bullet did not strike the limo's interior, and we know it also didn't hit any OTHER (non-JBC) victim(s) in the car....what other choice is there? The bullet, regardless of exact jump-seat placement in relation to the car's right-hand door (whether it be 6 inches or 2.5 inches), HAD TO HAVE HIT JOHN B. CONNALLY AFTER IT LEFT KENNEDY'S NECK. It is THE only reasonable conclusion.

* When we look at the following two schematics of the 1961 Presidential Lincoln limousine (the top one being an animated schematic-type image that can be found at Dale Myers' excellent website), we can see that Connally's jump seat is definitely "inboard" of the back seat on which JFK was sitting when the assassination occurred (and from photos, it's also fairly clear that JFK was sitting just about as FAR RIGHT on that seat as humanly possible, probably to make it easier to put his arm up on the window ledge and wave at the big crowds in Dallas, which is a "Far Right" determination that shouldn't be overlooked either, because it places Kennedy as far to the right of Connally's jump seat as would be humanly possible--per some of the pictures taken on 11/22/63).... 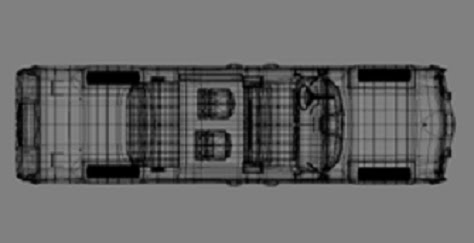 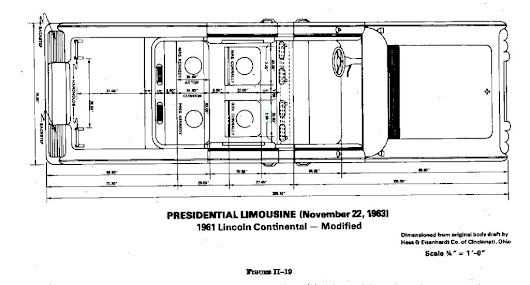 And when we compare the above two charts, we find that they are IDENTICAL with respect to the distance between the right door and John Connally's jump seat. (They sure look identical to me anyway.)

Main point being: Dale K. Myers is not trying to pull the wool over anyone's eyes at all. He's got the schematic (in animated form) right there on his website for all to see...i.e., the schematic that he used for his computer model, which was then laid on top of the Zapruder Film to form Dale's completed 3D model of the assassination.

And the Single-Bullet Theory WORKS and FITS perfectly, based on that schematic that can be found right on Dale's website. (And even though there aren't any detailed measurements that are readable on Dale's animated version of the schematic of the limousine, we can, as I mentioned, compare Mr. Myers' chart to the larger Hess & Eisenhardt limo chart that I also linked above (which does include the measurements), and we can toggle between the two charts and see that the distance between the inside of the right door and the right-hand jump seat is just about as identical as you can get in both of those charts/schematics (by way of "eyeballing" the two charts anyway).

Dale K. Myers' exacting animation project ("Secrets Of A Homicide") is a great achievement in animation, in my opinion. And it's a project that Mr. Myers deserves the right to be very proud of. His animation model has virtually proven the doability, viability, workability, and (above all) the PROBABILITY of the Single-Bullet Theory.

And, in my view, even the most hardened anti-SBT conspiracy theorist would be wise to take a good long look at Mr. Myers' website and his animation project (as well as a good look at the 2003 ABC-TV documentary "The Kennedy Assassination—Beyond Conspiracy", which is a program that includes several clips from Dale's animation). And it should be blatantly obvious that Myers has done his homework here, and has gone to extreme measures to ensure accuracy within his animation project.

Let me ask the following question one more time (I've made this inquiry in the past as well, without receiving any satisfactory answer from any anti-SBT conspiracy theorist):

If the animation project authored by Dale K. Myers is dead wrong in its depiction of the Single-Bullet Theory as being a one-bullet scenario that is not only POSSIBLE, but very, very likely a rock-solid FACT in all respects, then I want to know HOW in this wide world of ours it would have been even remotely possible for Dale Myers to have stuck THAT CLOSE TO THE REAL EVIDENCE in the case and to have produced a BOGUS animation (as CTers believe he has done) that comes so incredibly close to what a true and NON-BOGUS animation would have looked like?

To clarify what I mean by that --- The depiction of the victims (JFK and Connally) in Myers' animation (along with the general configuration of the limo and of Dealey Plaza and of the TSBD and of Elm Street, etc.) are certainly NOT so far "out of whack" that any CTer can look at it and say this:

"Myers is full of shit here! He doesn't have this model even CLOSE to being accurate in any way!"

So, even if the anti-SBT crowd wants to nitpick about the size of John Connally's head in Dale's 3D model, or about the height of the limo's crossbar seen in the animation.....those same CTers haven't a leg to stand on when it comes to the big-ticket question that no conspiracist has EVER been able to reconcile--and that question is:

If the SBT is only a wet dream of "Warren Commission shills" (et al), then how in the world did multiple gunmen firing multiple bullets (usually at least THREE missiles, per CTer accounts) into the bodies of two victims manage to MIMIC A PERFECT (or damn near perfect-looking) SINGLE-BULLET EVENT with those multiple bullets?

I'm still waiting for a single SBT-hating conspiracy theorist to logically and believably answer the above question.

In short, the Single-Bullet Theory makes a whole bunch of (common) sense. Especially when placed up against ANY alternate scenario that might be used to try and knock it down.