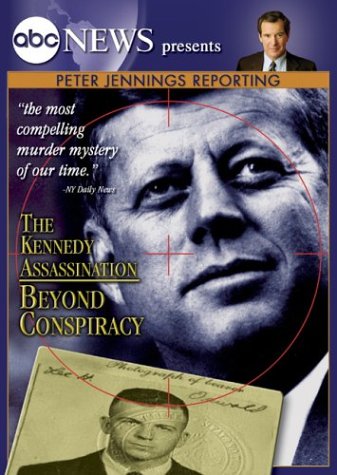 The ABC-TV News production "Peter Jennings Reporting -- The Kennedy Assassination: Beyond Conspiracy" originally aired on that television network in November of 2003, two days before the 40th anniversary of the assassination of America's 35th President, John F. Kennedy.

Most of the JFK conspiracy theorists of the world will fail to find any redeeming qualities in a program like this one, a program that bases its conclusions on just the FACTS in the case, and not fanciful, would-be theories of hidden gunmen, faked photographs, and forged autopsy records, etc.

This program dives head-first into the documented "facts" that we have, and presents a stylish, polished, and completely-acceptable documentary based on those facts (none of which has ever been proven to be inaccurate to the point of dismissal, including, of course, the highly-controversial "Single-Bullet Theory").

I like the way ABC presents the case in this program, pulling no punches along the way. It's obvious to them, as it is to me, that Lee Harvey Oswald was the lone killer of JFK (and Dallas police officer J.D. Tippit as well) in 1963.

And, seeing as how every scrap of physical evidence in both the Kennedy and Tippit murder cases does indeed point in the direction of Lee Oswald having acted alone, I cannot fathom how so many individuals still seem to want to cling to the idea of conspiracy.

And, no, I certainly do not believe for a single second that ALL of this large wealth of evidence against Oswald could have possibly been faked, fabricated from whole cloth, or otherwise tampered with, so as to implicate an innocent "patsy" named Lee H. Oswald. That notion, to me, is far more fanciful than anything the Warren Commission published in 1964.

With the aid of Dale K. Myers' very detailed three-dimensional models [sample images below], which show that the "SBT" is far from a "Lone Nut dream", Peter Jennings and ABC-TV paint a convincing portrait of the way things really occurred on Elm Street in Dallas, Texas, on November 22, 1963.

Mr. Myers' animations actually show that the Single-Bullet Theory is more than just a "theory" -- it's very likely the ONLY possible explanation to account for the wounding of JFK and Texas Governor John Connally. Because, without it, we would have another sort of "Magic Bullet" -- a bullet that enters Mr. Connally and completely disappears without a trace!

In actuality, without the SBT, the number of vanishing "Magic Bullets" isn't just a mere one -- it's at least THREE! And that's because most conspiracy theorists believe that the wound in JFK's throat was an ENTRY wound instead of the exit point for Bullet CE399.

And the number of "vanishing bullets" goes up to an even more ridiculous FOUR according to many conspiracists, who are of the opinion that Governor Connally was struck by two separate missiles to account for his wounds.

So, if the SBT is not the correct version of the wounding of Kennedy and Connally, then there must have been three (or four) different bullets which entered both men on November 22nd to cause the various wounds.

And, to add to the incredibly unbelievable nature of this silly pro-conspiracy version of events, I guess we're supposed to swallow the oddball notion that TWO separate bullets (fired from two different guns) somehow BOTH failed to transit all the way through the body of President Kennedy, despite the known fact that not a single bone or hard surface was struck by either of these "Magic CT Bullets" during their time spent inside the back and neck of the President.

Does that CT scenario sound like a logical multi-missile alternative to the Single-Bullet Theory? Hardly. To the contrary, I'm always amazed when a conspiracist can put such nonsense on the table and do it with a straight face. I know I couldn't. I'd be compelled to burst out laughing at such unsupportable conspiracy-slanted tripe. (Not to mention the virtual impossibility of having three separate wounds on two different victims aligning themselves in a very-nearly-perfect "SBT"-like manner if these three wounds had been caused by THREE different gunmen, as many CTers incredibly seem to believe.)

Plus, as mentioned, all of these bullets had to disappear into thin air in order to then be "replaced" by bullet #CE399 fired from Lee Oswald's rifle (which is the only bullet ever recovered from Parkland Hospital). It sure was a lucky day at Parkland for the "Conspiracy Team", huh?

Quite obviously, that multiple-bullet conspiratorial version of the SBT never could have happened in a million lifetimes. But, amazingly, scads of conspiracy theorists actually believe that it did occur.

There are many good-quality archival video clips utilized in this documentary, plus some new 2003 interviews featuring key players in the tragedy. But it's Dale Myers' 3-D mock-ups which really hit a bull's-eye here. 'Fascinating' is the best word for them, I would say.

I would have liked more of the Myers' animation shown within this compelling 2-hour program (88 minutes sans commercials), but unfortunately much of Mr. Myers' comprehensive work was not used for this ABC special.

But there's still enough shown for the viewer to obviously know that Mr. Myers hasn't just slapped this 3-D computer model together overnight. He has been working on this animation project for many years. And that level of research and detail comes through in the all-too-brief demonstration of his work on this program.

Books, movies, television documentaries, and videos on the subject of the JFK assassination have been decidedly one-sided, favoring one conspiracy angle or another. But there are far too few pieces of material about that fateful Friday in Texas which focus attention on the idea that there was NO conspiracy, and that a lone oddball named Lee Harvey Oswald took a rifle with him to work on the morning of November 22nd, 1963, and fired three shots from a sixth-floor warehouse window, killing the President of the United States.

This well-done ABC program [which can be seen below] fills a very important gap with regard to video material relating to the assassination of President John F. Kennedy.

CLICK HERE TO WATCH THE COMPLETE
ABC-TV PROGRAM, "THE KENNEDY ASSASSINATION: BEYOND CONSPIRACY"