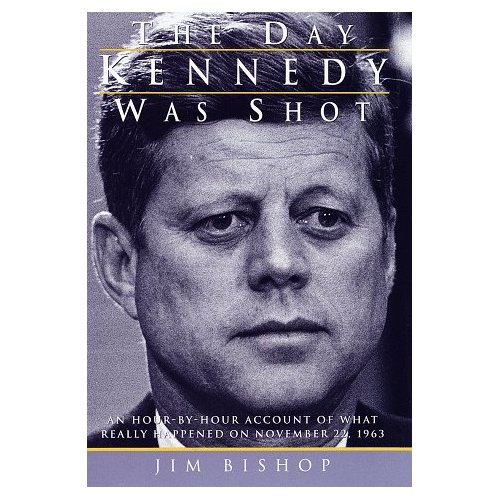 "THE DAY KENNEDY WAS SHOT: AN HOUR-BY-HOUR ACCOUNT OF WHAT REALLY HAPPENED ON NOVEMBER 22, 1963", first published in 1968, was written by Jim Bishop and provides some fascinating insights into the last day of President John F. Kennedy's life.

My copy of Mr. Bishop's ultra-detailed book is a 1983 hardcover edition, 713 pages in length. The book is divided into four major sections, chronicling the events of JFK's assassination on Friday, November 22, 1963, in practically minute-by-minute fashion (beginning at 7:00 AM Central Standard Time). The four sections are labelled: "The Morning Hours", "The Afternoon Hours", "The Evening Hours", and "The Midnight Hours".

Many bits and pieces of little-known trivia concerning JFK's last day can be accessed through this compelling volume. Such as: Mr. Kennedy's last breakfast consisted of the following fare .... Two eggs (boiled for precisely five minutes), toast (with marmalade on the side), orange juice, and a large pot of coffee.

Throughout the book, Mr. Bishop supports the Single-Bullet Theory (SBT) and advocates the idea that Lee Harvey Oswald was the lone assassin on November 22nd, which is a point-of-view that I agree with wholeheartedly. There are, however, a few portions of the book that I disagree with and fail to understand (especially from a "Lone Assassin" standpoint). Such as:

I find Mr. Bishop's account of the first (missed) rifle shot somewhat curious, given what we can see JFK doing after this shot via the Zapruder Film. Bishop has the first shot missing the car's occupants, striking the concrete of Elm Street to the right rear of the Presidential limousine; this bullet causes "dust" and "concrete chips" to fly up off the street (noticed by at least one witness in Dealey Plaza -- Mrs. Donald S. Baker). Bishop's book claims (on Page 172) that Mrs. Baker "saw the spray and pulled back". Mrs. Baker's Warren Commission testimony does confirm this.

However, this first missed shot, according to Bishop's book, is also what causes President Kennedy to stop waving, as the President supposedly feels (per Bishop) the effects of this missed shot, being peppered in the face with debris. (This is very similar to what happened to bystander James Tague on this very same shot.) This "peppering" in the face causes JFK to raise his arms up to his face in an automatic protective motion.

Mr. Bishop does not "line up", or correspond, his version of events with the Zapruder film frames (which is unfortunate), so we can only guess as to exactly WHEN on the Z-Film this first (missed) shot occurs via Bishop's narrative.

But this version by Bishop (although very close to what I believe occurred) is probably incorrect in a few respects. One of which is the fact that (on the Zapruder Film) we can easily see that the President continues to wave after a point in time when Bishop thinks JFK was peppered in the face by debris from the first gunshot.

President Kennedy is still smiling and waving to the crowd on his right-hand side as late as Zapruder Frame #188 or so, which is just two seconds away from what is, in my own opinion, the "SBT Frame" (Z224) -- obviously not enough time for Oswald to shoot twice with his Mannlicher-Carcano rifle.

Then there's Mr. Bishop's more detailed account on Page 173 of what happened----

"The President of the United States, feeling the tiny grains hit his face, began to lift both hands upward in fright. He, perhaps better than anyone in the Plaza, understood the import: he had felt the sandy grains on his skin and he had heard the sound he feared."

If JFK had FELT "concrete spray" on his face well BEFORE Z188 (which he would have HAD to in an "Oswald is the Lone Assassin" scenario), I have a problem with seeing him still smiling and still waving as late as the late Z180s.

It's quite difficult to reconcile this account of the first shot in another way too. That being -- how could a missed shot that chipped concrete in the street to the REAR of the President's car send shards/fragments of concrete up and into a location to where JFK's face would be hit by them?

It seems to me, via this scenario, Mr. Kennedy would have been struck on the back portion of his head/body, and not his face. Of course, in reality, the "JFK felt the concrete" account is all pure conjecture and just a wild guess on Mr. Bishop's part; and to add in these obviously speculative remarks in his book -- when such a thing cannot possibly be proven, even remotely so -- is a bit too much speculation regarding the matter, IMO.

And: I also have a problem with Mr. Bishop's first-shot account (overall), in that he has this SAME bullet that peppered the President in the face also rocketing across the Plaza and nicking James Tague as well. (In addition, this same missile must have also done the damage to the street curb that we've seen in photos, which show a "fresh" bullet mark on the curb by Tague.)

Could this same bullet have struck the street (to the RIGHT REAR of the limo, per Bishop's account), and still have ricocheted in the correct direction to strike Tague and leave the obvious bullet mark on the curb?

[NOTE: I, myself, do think that a similar event did occur regarding Oswald's first shot, but I think that bullet probably first struck the oak tree in front of the Book Depository, resulting in the bullet splitting into two parts before reaching street level. More on that here.]

For such a well-researched and highly detailed account of events, I find a few errors very odd and it's a bit hard to believe they sneaked through into the final finished edition of the book, such as:

Misspelling (badly) Charles Brehm's name. Bishop has him represented as "Charles Brend" in his only reference to Brehm in the volume. And he also has another mistake regarding Brehm -- claiming that Brehm was "holding his five-year-old boy up to see the President" as the motorcade passed Brehm's position. This, of course, is wrong as well. Brehm was clapping the whole time, and was not "holding up" his son at all. Bishop also says Brehm was "on the sidewalk", which is also incorrect. There was no sidewalk where Brehm was standing -- there was only grass. Small trivial errors, but noticeable nonetheless.

And then there's also a minor error in the book pertaining to when Nellie Connally made her "You can't say Dallas doesn't love you" statement to President Kennedy just before the shooting. The book claims that this statement was made AFTER the Elm St. turn -- which is inaccurate. Nellie said this just after the Main-to-Houston Street turn (with photos and films even showing JFK leaning in towards Mrs. Connally on Houston Street to accept her words more clearly).

"The Day Kennedy Was Shot" is riveting reading, however. I enjoyed it greatly, except for a few minor mistakes. While reading Mr. Bishop's text, you get the feeling of going back in time, back to before that awful noon in Dealey Plaza, when the President was gunned down in the middle of the street.

If only the reader of this book could somehow freeze the clock at 12:29 PM on November 22nd, and keep the horrible event of one minute later from occurring. But, sadly, the simple act of closing this book when you get to Page 177 (the head shot that killed the President) won't stop the assassination from taking place. It's too bad such magical powers don't exist.