THE BACK OF PRESIDENT KENNEDY'S HEAD (PART 10)

But you've seen the photos and X-rays of the body. And you've managed
to misinterpret nearly every single one of them in order to prop up your
insane "LN/BOH/EOP" theories.

Granted, John Canal's task has not been an easy one -- i.e., it's not
an easy task to have to try and promote Canal's idiotic "LN/BOH/EOP
ENTRY" theories while looking directly at multiple autopsy photographs
and X-rays of the dead President Kennedy, which are photos and X-rays
that are painting an obvious picture of the truth regarding the
location of JFK's wounds (i.e., "Cowlick Entry" and "No Large Wound In
The Back Of The Head"). 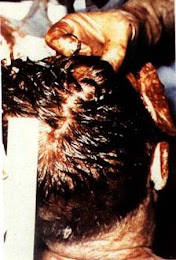 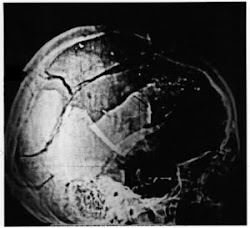 But John Canal, for nearly ten years now, has made it his life's work
to promote his singular, impossible theories regarding JFK's wounds.

And while promoting those theories, Mr. Canal has no problem
whatsoever in calling every member of the Clark Panel (4 doctors in
total) liars or boobs. Canal has no choice BUT to believe that all 4
Clark Panel members were either liars or total boobs, because in 1968
those four guys all signed a report that said this (plain as day)
about the entry wound in JFK's head:

"There is an elliptical penetrating wound of the scalp situated near the midline and high above the hairline. The position of this wound corresponds to the hole in the skull seen in the lateral X-ray film #2. .... On one of the lateral films [X-rays] of the skull (#2), a hole measuring approximately 8 mm. in diameter on the outer surface of the skull and as much as 20 mm. on the internal surface can be seen in profile approximately 100 mm. above the external occipital protuberance. The bone of the lower edge of the hole is depressed." -- Via 1968 Clark Panel Report


In replying to the Clark Panel passage quoted above, John Canal came
back with this incredibly lame retort:

"[Dr. Russell S.] Fisher started this cowlick entry business and the rest of the government experts parroted him...do you really think [Dr. Michael] Baden [of the HSCA] was going to refute the conclusions of a government panel [Clark] that had already refuted the conclusions published by the earliest government inquiry [WC]??????? Do you think they were going to play musical entry wound locations?" -- John A. Canal; 05/17/09


Just brilliant, huh? Mr. Canal thinks that ALL NINE members of the
HSCA's Forensic Pathology Panel would be willing to promote a bunch of
lies about the wounds of an assassinated U.S. President just so that
the boat wouldn't be rocked any further....even though ALL NINE of the
FPP doctors must surely have realized that their "cowlick entry"
determination (which would be in print for ALL TIME in the HSCA
volumes via Dr. Baden's testimony) was pure nonsense and bullshit! (Or
were some of those nine FPP doctors just simply boobs/fools/idiots,
John?)

And, apparently, Mr. Canal must also think that Dr. Russell Fisher of
the Clark Panel was able to strong-arm his three cohorts on that Clark
Panel back in '68 too. Because, per Canal, it was ONLY FISHER who
"started this cowlick entry business and the rest of the government
experts parroted him".

Talk about mindless drones with no backbone or will of their own! I
guess Canal thinks the Clark Panel and the HSCA were full of these
mindless, follow-the-leader drones -- even though each "drone" HIMSELF
was examining the autopsy photos and X-rays too!

And evidently NONE of those 12 people on the Clark and FPP panels who
simply "parroted" Fisher's cowlick-entry conclusion had a lick of integrity
either. They were all willing to "parrot" the cowlick conclusion merely
because Fisher said so. Right, John C.?

As is pretty clear by now, John A. Canal is fairly close to going over the
"deep end". Because believing that a dozen doctors who were associated
with TWO SEPARATE OFFICIAL U.S. GOVERNMENT INVESTIGATIVE PANELS
(who all had access to the same photos) would have all lied and "parroted"
something that they surely must have known was a crock of shit is a
paranoid theory that only a total idiot could begin to believe.

>>> "Fisher started this cowlick entry business and the rest of the government experts parroted him...do you really think Baden was going to refute the conclusions of a government panel [Clark] that had already refuted the conclusions published by the earliest government inquiry [WC]???????" <<<

If that panel [the Clark Panel] needed to be refuted, then yes, of
course Baden & Company would have refuted Fisher, et al.

Why is this question even being asked, John? OF COURSE Baden would
have admitted to an "EOP" entry wound if the Forensic Pathology Panel
saw good enough reason to endorse such an entry-wound location.

But, quite obviously, the HSCA's FPP (like the Clark Panel ten years before
it), could easily SEE FOR THEMSELVES (via the photos and X-rays) that
there is NO WOUND IN THE EOP AREA. The wound is in the cowlick...and
the X-rays verify that fact.

The entry hole in the cowlick was seen by every Clark Panel member and
every HSCA/FPP member. And both the Clark Panel and the HSCA's FPP
determined that the COWLICK scalp entry hole lines up perfectly with the
COWLICK entry as seen in JFK's skull on the X-rays.

John Canal, however, will no doubt deny (or ignore) that last "lines up"
fact until a few cows show up on his doorstep.

>>> "Do you think they were going to play musical entry wound
locations?" <<<

If that was required -- YES -- of course they would have. Why isn't this
obvious to you, John?

It appears that paranoia has set in on an LNer (John C.). That's very
unusual too, because most LNers are very good thinkers and very good
at assessing and evaluating the evidence.

But John Canal has a unique LN/BOH/EOP theory to peddle. So, it appears
that his common sense has gone flying out the window. That fact is
obvious when reading these paranoid remarks uttered by John C.:

So, as John Canal misinterprets the photos and X-rays and mangles the
head-wound evidence, Mr. Canal has no hesitation (or embarrassment)
whatsoever in calling ALL NINE MEMBERS of the HSCA's Forensic Pathology
Panel "liars" too (especially the head of the FPP, Michael Baden, who, per
Canal, was the primary "liar", with Baden lying his ass off "several times",
if we're to believe Mr. Canal's loopy interpretation of things).

Canal needs ALL NINE FPP members to be "liars", because of these
passages that can be found (plain as day) in the HSCA testimony of the
so-called head "liar", Michael Baden:

"We, as the [FPP] panel members, do feel after close examination of the negatives and photographs under magnification of that higher perforation, that it is unquestionably a perforation of entrance; and we feel very strongly, and this is unanimous, all nine members, that X-rays clearly show the entrance perforation in the skull to be immediately beneath this perforation in the upper scalp skin. .... It is the firm conclusion of the panel members...there is no bullet perforation of entrance any place on the skull other than the single one in the cowlick." -- Dr. Michael M. Baden


So, like almost all conspiracy theorists do, John C. wants to pretend that
a bunch of people "lied" about certain things relating to the death of
President Kennedy. Because without a gang of rotten, worthless "liars"
(spanning a period of many, many years), John's crazy "EOP entry" theory
goes up in smoke -- which is where it belongs anyway.