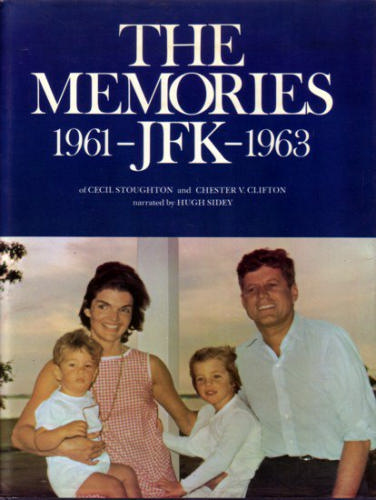 If you're looking for some splendid (and rare) photographs of President John F. Kennedy and his family, then this richly-detailed book should certainly be given due consideration.

"THE MEMORIES -- JFK -- 1961-1963" is a 200-page hardcover volume that is loaded with top-quality images of JFK, the First Lady (Jacqueline Kennedy), and the two young Kennedy children (John Jr. and Caroline).

Every picture in this publication (save one) was taken by official White House photographer Cecil Stoughton, who snapped hundreds (if not thousands) of
shots of the good-looking First Family during the "Camelot" years, which spanned precisely 1,037 days, beginning with President Kennedy's memorable inauguration on the snowy Washington afternoon of January 20, 1961, and ending tragically
at just about the same time of day (noontime) nearly three years later, on November 22, 1963, when JFK was shot and killed in an assassination attempt while riding in a motorcade through the crowded city streets of Dallas, Texas.

But those 1,037 days of JFK's truncated Presidential term still provided Mr. Stoughton many opportunities to keep his camera's shutter busy. And a great number of those pics are presented in this volume (some in color).

I mentioned that just one photo in the book was not taken by Stoughton -- that one being a shot of Stoughton himself, snapped by 2-year-old John Kennedy Jr. (pretty good pic, too, by the amateur Kennedy photog).

In addition to Stoughton's superb camera work and heartfelt captions and recollections of being in the Kennedy "inner circle", this book also contains the remembrances of President Kennedy's military aide, Major General Chester V. Clifton. The book is narrated by Time-Life correspondent Hugh Sidey, who was a close friend of the Kennedys.

Among the many photos enriching these pages are some very rarely published images of the family living quarters on the second floor of the White House. There's also a charming two-page photo spread showing Jackie (and offspring) riding in a small horse-drawn sleigh on the White House lawn. That exquisite photo would make an ideal Christmas postcard, especially if a color version of the photo exists, which I am unsure of. It's printed in black-and-white in the book.
HERE'S a very similar (but not quite identical) picture.

The cover photo used for the hardback edition of this title -- showing a very relaxed-looking President Kennedy, wife Jackie, and their two children -- I have heard was one of Jacqueline Kennedy's favorite pictures ever taken of the First Family by Mr. Stoughton. (It's one of my personal favorites, too.) That's a cropped version of that photo on the cover; but the book also includes a full-page version, also in color, which occupies all of Page #190.

HERE is a picture that is nearly identical to the one that occupies the front cover of this book. Both of the photos were taken at Hyannis Port, Massachusetts, on the same day in August of 1962. And HERE is a third picture of the Kennedys from that same photo shoot, this one in black-and-white.

In 1980, a paperback re-issue edition was released, with a different cover image. The softcover version depicts JFK and brother Robert Kennedy on the front cover, which is the same picture that adorns the back cover of the hardback First Edition.

The hardcover edition's first printing was in 1973, coinciding with the tenth anniversary date of JFK's assassination. This large book, published by W.W. Norton & Co. of New York, has a "coffee table" quality to it, with high-quality paper stock used for its 200 pages.

I've owned this book for many years now, and hadn't re-visited its contents for quite some time until just recently. Upon re-examining these pages, the obvious devotion and fondness that Mr. Stoughton, Mr. Clifton, and Mr. Sidey had for John Kennedy and the First Family during those magical days in the early 1960s becomes readily apparent via the stellar photographs and sincere text and captions that adorn each page. I found myself enjoying this material just as much as I had years ago. It was like seeing it for the very first time.

This is a very "personal" book about the Kennedys. There are no conspiracy theories espoused here, and no talk of JFK's political enemies. Instead, what we get are the firsthand reflections of three of Jack Kennedy's friends, via a brief amount of text and lots and lots of captivating photographic images.

The grace, elegance, sophistication, style, and humor of the Kennedy White House years are vividly realized and illustrated in this sleek and well-done publication. 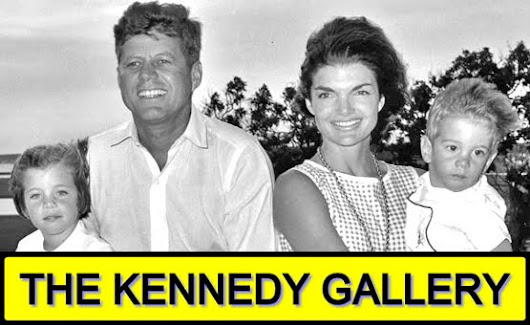