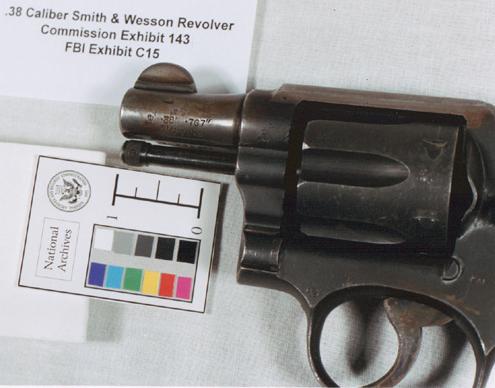 
JAMES "ANYBODY BUT OSWALD" DiEUGENIO SAID:

>>> Davey, still up to your old tricks huh. What Myers is saying is the reverse of what you said! And you didn't even notice that? C'mon. Come clean. Your argument was this: REA shipped the revolver to the box. The post office then collected payment from LHO. The post office then served as fiduciary for the transaction. Even though this is illogical and not really precedented--look at how Fed Ex operates--I granted you the right to make the argument. I then pointed out the (many) problems with it. Now, Myers' does something completely different. He says in essence that DiEugenio was right. That normal procedure was to have REA mail a notification card to the post office. Then the customer would go to the REA office to pick up the merchandise. And you don' t bat an eyelash." <<<

Of course I was fully aware that Dale Myers' article said the opposite of what I said to you in our exchanges about this REA matter in this thread. That was the whole purpose for my posting it in the first place--to get it straightened out.

I certainly wasn't trying to imply that the quoted passages I used from Myers' article were saying the exact same thing I had said about the revolver earlier this week in this forum thread. (Duh.)

BTW, here's an "Edit" that I wrote this morning, which I have added to my archived blog version of this "revolver" discussion:

"EDIT --- Since writing the above remarks, I've come into possession of additional information concerning the method by which Lee Harvey Oswald likely came into physical possession of the .38 Smith & Wesson mail-order revolver he ordered from Seaport Traders, Inc.

"This information comes from the person who probably knows more about the J.D. Tippit murder (and, hence, more about the gun that was used to kill Officer Tippit) than anyone else on the planet, Dale K. Myers, the author of the excellent 1998 book "With Malice: Lee Harvey Oswald And The Murder Of Officer J.D. Tippit"." -- DVP

I then added excerpts from Dale Myers' article directly underneath the words quoted above.

I'll remind Jim DiEugenio that I also made the following remarks in this Education Forum post four days ago, on August 3, 2010 (and please note that the post has not been edited by me since August 4, 2010 [via my local time in Indiana], three days ago):

"I suppose it's possible that I'm wrong about how these types of "COD" transactions worked when companies shipped merchandise to P.O. Boxes, but if the PHYSICAL ITEM itself was actually shipped to P.O. Box 2915 (and Heinz Michaelis said it was in his WC testimony), then it means that the post office employees would be initially handling the money from Oswald (since, quite obviously, Oswald didn't set up camp and live right there inside his post office box as he waited for the delivery truck to show up with his pistol)." -- DVP

Therefore, via the above remarks, I was essentially admitting several days ago that I wasn't absolutely certain as to the exact location where Oswald picked up his Smith & Wesson revolver in 1963.


>>> "The problem with this is the following, and I quote your Bible, the WR: "...the revolver was actually shipped on March 20 BY RAILWAY EXPRESS." (p. 174, emphasis added) There can be no ambiguity here. If REA shipped it, it had to go to the P. O. box. Why? Because that is the address on the order form." <<<

Right. And thanks for posting that passage from Page 174 of the Warren Report, because it further clouds and confuses the very same issue about WHERE the physical gun was sent. I.E., was the revolver sent to the post office or was it retained at the REA offices?

But you should also take note of the source note (#588) that appears on page 174 of the WCR concerning that quoted passage -- it leads to the various Michaelis exhibits and to Heinz Michaelis' WC testimony at 7 H 376-378, which is the exact testimony that I found confusing regarding this precise "Where Was The Revolver Shipped?" topic.

I think it's quite obvious that even the Warren Commission itself was confused about it. But that confusion is pretty well ironed out in Dale Myers' article. But I certainly agree that it seems a bit confusing.

In fact, that very thing about Heinz Michaelis saying to the Warren Commission that the GUN ITSELF was shipped to P.O. Box 2915 is the main thing that made me say this to you (Jim D.) the other day:

"There was very likely no need for Oswald to go to the Railway Express office to pick up the revolver. The gun itself was physically shipped by REA to Oswald's Dallas P.O. Box. We know that via Michaelis Exhibit No. 4 and the testimony of Heinz W. Michaelis [at 7 H 378]:

JOSEPH BALL -- "I will show you another document here which is a slip of red paper marked "Railway Express Agency" which has been heretofore identified with an FBI Exhibit No. DL-29 [which was marked by the Warren Commission as "Michaelis Exhibit No. 4"]. What is that document?" ....

HEINZ MICHAELIS -- "That is a copy of the receipt which we got from the Railway Express Agency showing that on March 20, 1963, one carton with a pistol was shipped to A. Hidell, P.O. Box 2915, Dallas, Texas." "

But in Myers' article, we can see that it's very likely that only a NOTIFICATION CARD was actually put into Oswald's P.O. Box -- and the physical gun itself was probably never inside the Dallas post office at all. Which does make sense too, because it eliminates the post office employees from having to handle any money from the person who is claiming the package.

Which, of course, is something you yourself were saying the other day too--i.e., it would be odd for the post office to have to handle the money that is really supposed to go to Railway Express (and then to Seaport Traders).

And you're right--it does make more sense for the C.O.D. cash transaction to be handled by the REA people themselves.

But when looking at Heinz Michaelis' testimony shown above about the GUN PACKAGE ITSELF being physically sent to P.O. Box 2915, I deferred to that explanation. And, quite obviously, so did the Warren Commission on page 174 of the WCR.

But it's probably not entirely accurate. What Michaelis should have said is that a card of notification of delivery gets sent to the P.O. Box, but not the merchandise itself. [But, then again, maybe not. CLICK HERE.]

It would have been nice if Joe Ball had asked Michaelis this question (but he never did):

"Now, Mr. Michaelis, what would Lee Oswald have had to do in order to physically take possession of the revolver he ordered through Seaport Traders after that gun was shipped by you via Railway Express? Would he have picked up the package at his post office box, or is there some other method by which he would get his package in a C.O.D. transaction like this one?"

Unfortunately, no question similar to the one simulated above was asked of witness Heinz Michaelis.


>>> "Here is the other problem. Myers pictures the exhibits in the WR from page 173. Please show me where the address of REA in Dallas is noted on any of these documents. Or the phone number. This leaves the obvious question: How did Oswald know where to go to pick up the revolver?" <<<

The Railway Express notification card that would have been put into Oswald's post office box isn't among the documents pictured on Page 173 of the Warren Report.

That notification card no longer exists. And that's very likely because it was thrown away by the Railway Express people shortly after Oswald picked up his revolver at REA. That card had served its purpose, and there was really no reason for anybody to keep it.

It's also reasonable to assume that the notification card that was put into Oswald's P.O. Box had the address of the REA Express office on it. Hence, Oswald knew where to go to get his revolver.

Plus, Heinz Michaelis testified that there was proof that REA remitted the $19.95 to Seaport Traders. Which, quite obviously, would indicate that SOMEBODY PAID RAILWAY EXPRESS the amount of the C.O.D., and that "somebody" was undoubtedly the same person who ordered the gun in the first place--Lee Harvey Oswald.

JOE BALL -- "Is there anything in your files which shows that the Railway Express did remit to you the $19.95?"

HEINZ MICHAELIS -- "The fact that the exhibit number...was attached to the red copy of the invoice...indicates that the money was received."

In addition, as I mentioned the other day, the word "Paid" is written in on Michaelis Exhibit No. 2. And why would this order be marked as "Paid" if it wasn't really "paid" by the person who ordered it?: 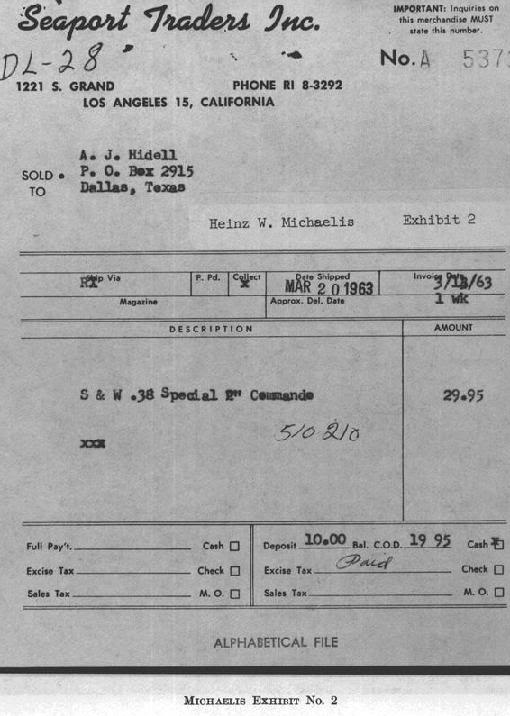