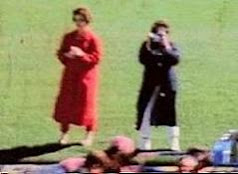 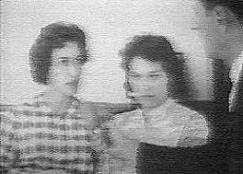 Jean Hill was the famous "lady in red" who witnessed the last seconds of President John F. Kennedy's life as Lee Harvey Oswald was firing three rifle shots at the President from the Texas School Book Depository in downtown Dallas, Texas, which resulted in JFK's death on November 22nd, 1963.

Within Hill's 1992 book ("JFK: The Last Dissenting Witness") can be found the following passage:

"Hill saw the shadowy figure of a man fire at President Kennedy from behind a picket fence atop the now-famous grassy knoll."

Anyone who owns a lot of archival TV footage of those four bleak days following JFK's assassination will easily be able to verify what I have verified via just such an archive of video material. And that is the fact that, on 11/22/63 (within less than two hours of the shooting), Jean Hill appeared on television in a WBAP-TV videotaped interview, where she explicitly says she never saw anyone firing any weapon at the President:

QUESTION: "Did you see the person who fired the weapon?"

JEAN HILL: "No, I didn't see any person fire the weapon."

QUESTION: "You only heard it?"

In addition to her WBAP-TV appearance, Jean Hill was also interviewed at least three more times on radio and television on 11/22/63 (by WBAP, ABC, and KRLD). The first of those interviews had WBAP's Tom Whalen talking on the telephone with Hill just a few minutes after 1:00 PM CST, which was before President Kennedy's death had even been officially announced.

In none of her November 22nd interviews did Hill mention seeing anyone with a gun behind the picket fence on the Grassy Knoll.

All of those Jean Hill interviews can be heard and/or seen below:

What is a person to make of this flip-flop in Hill's testimony?

Logically, her earliest account of the shooting (which has been recorded on videotape for all to watch and listen to over and over again) should be looked upon as the BEST account of what she saw that Friday afternoon back in 1963.

But nearly thirty years later--after having served just months earlier as an official (but uncredited) "technical adviser" to Oliver Stone during the making of Stone's 1991 film "JFK" (coincidence?)--Hill came out with "The Last Dissenting Witness", a book that contains the following startling details on page 23, which are details that Jean never bothered mentioning at all during her multiple radio and television interviews on November 22, 1963:

"On the other side of the street, at the top of a little green mound universally known today as the 'grassy knoll', Jean Hill had seen an incredible sight...and she was transfixed by it. It was a sight that was destined to haunt her for the rest of her life: A muzzle flash, a puff of smoke, and the shadowy figure of a man holding a rifle, barely visible above the wooden fence at the top of the knoll, still in the very act of murdering the president of the United States."

Did Jean's memory suddenly improve greatly in the intervening years? Everyone should at least pause for a few moments to consider that question.

Another major piece of Jean Hill-created "evidence" that is easily knocked down is her ridiculous claim of having seen Oswald's murderer, Jack Ruby, racing across the Grassy Knoll at the exact time of JFK's assassination.

Multiple witnesses can place Jack Ruby in the Dallas Morning News building at the precise time the President was being murdered. Ruby himself, in fact, admits to having been in the DMN building at the time of the assassination.

Below is a portion of the verbatim testimony given by Jack Ruby to the Warren Commission on June 7th, 1964 (from the Dallas County Jail, where Ruby was being held after having been convicted on March 14, 1964, of murdering JFK's assassin, Lee Oswald):

"I picked up the brochure that Friday morning [November 22, 1963], and I also had business at the [Dallas Morning] News Building on Friday, because that is the start of the weekend, which is very lucrative, the weekend. ....

"So I went down there Friday morning to Tony Zoppi's office, and they said he went to New Orleans for a couple of days. I picked up the brochure. I believe I got downtown there at 10:30 or 11 o'clock that morning. And I took the brochure and then went into the main room where we compose our ads. That is the sales room where we placed our ads. And I remained there for a while. I started to write the copy of my ad.

"Well, John Newnam comes in, and evidently he took it for granted I finished my ad, and I don't recall if he paid for his ad, and suddenly there is some milling around. I think it was 12, or 15 minutes after 12, I don't recall what, but John Newnam said someone had been shot. And I am sorry, I got carried away. It is the first time I got carried away, because I had been under pressure.

"And someone else came running over and he said a Secret Service man was shot, or something to that effect. And I am here in the middle with John Newnam, because Newnam isn't paying any attention to anyone else, and there is a lot of going back and forth. So someone must have made a statement that Governor Connally was shot. I don't recall what was said. And I was in a state of hysteria." -- Jack Ruby [5 H 183-184]

Therefore, how is it even remotely possible for Jean Hill to have seen Jack Ruby on the Grassy Knoll in Dealey Plaza at 12:30 PM when President Kennedy was being shot? Quite obviously, this is not possible.

But Jean Hill and Oliver Stone (in his movie) would like to have people believe that Ruby was running around Dealey Plaza's grassy slopes at 12:30 PM on November 22nd, instead of where even Ruby himself admits he was at the time of the assassination (with multiple witnesses to verify his story) -- and that was on the second floor of the Dallas Morning News building.

SOME RELATED THOUGHTS AND COMMENTS
ABOUT THE 11/22/63 WITNESSES:

But, if we're to believe the CTers, those conspiracy-favoring witnesses like Jean Hill and S.M. Holland and Acquilla Clemons, et al, were somehow born with unimpeachable "Conspiracy-Noticing" skills.

Acquilla Clemons' account of the J.D. Tippit murder is taken as Gospel by many conspiracists, despite the wholly illogical "plot" that she supposedly witnessed on Tenth Street that day. The illogical plot being:

Having TWO killers conspire to commit the Tippit murder, even though the conspirators' #1 goal here is to FRAME JUST ONE SINGLE "PATSY" FOR THIS MURDER (namely someone named Lee Harvey Oswald).

Let's use TWO killers (needlessly, of course, for a practically point-blank killing of a policeman, who was just inches from the gun of the killer), instead of just using our trusty, present-at-every-murder-Oswald-supposedly-ever-committed-in-his-life "LHO Imposter" to do the job.

What school for covert acts did these plotters graduate from anyway -- The Academy For Brain-Dead Conspirators?

Nobody could be as stupid and reckless as these November 22nd conspirators were said to have been (per CT-slanted versions of events). Not possible. And this recklessness extends far beyond just the Tippit murder scene as well. In fact, it applies ever more so to the JFK killing in Dealey Plaza.

WHY in the world would these professional killers even WANT to utilize THREE teams of assassins (as Oliver Stone claims in his movie), firing six bullets potentially into their one target (JFK) from a variety of different shooting locations, when the whole idea of this intricate, supposedly-well-planned "plot" is to frame just a single "Patsy" who is supposed to be located in the Book Depository?

Did these conspirators deliberately TRY to make their assassination scheme as complicated and implausible as they possibly could? It sure seems like it. And yet Oliver Stone actually has people buying this kind of silly stuff.

Well, anyhow, whatever you do, take the contents of Jean Hill's 1992 book and all of her post-November 22nd statements with a very large-sized grain of salt. (That advice goes double, make that triple, for viewers of Oliver Stone's motion picture as well.)