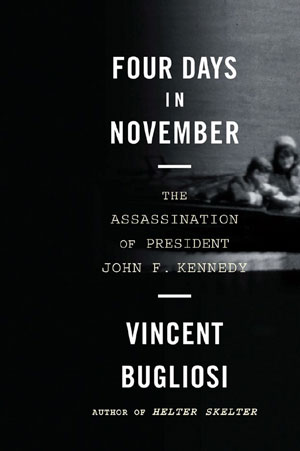 This 688-page paperback is a reprint of the first chapter of Bugliosi's mammoth and spectacular 2007 hardcover tome "Reclaiming History". So if you've already got that book, there's really no reason to also purchase this "Four Days" volume too.

The award-winning* "Reclaiming History" lays out all the evidence (in overwhelming doses) to definitively show that Lee Harvey Oswald--alone--did, indeed, murder President Kennedy in Dallas, Texas, on November 22, 1963.

Author and former Los Angeles Deputy District Attorney Vincent T. Bugliosi has referred to "Reclaiming History" as his "magnum opus", and after reading its compelling and convincing contents, such a description is certainly hard to disagree with, in my own personal opinion.

"Reclaiming History", as mentioned, is mammoth in size and scope, logging in at 1,535,791 words and 2,824 total pages (which includes the 1,100+ pages of endnotes and source citations on a CD-ROM computer disc that is attached to the back cover of the book). That page count also includes all of the photo pages in "RH"; and most of those same photographs also show up in this shorter "Four Days" volume as well, albeit smaller in size.

The narrative that we find in "Four Days In November" begins at 6:30 AM on the morning of President Kennedy's assassination (Friday, November 22nd, 1963), and continues chronologically through the day of JFK's funeral (Monday, November 25th).

Bugliosi provides an incredible amount of information and seldom-revealed facts in "Four Days", much of which will probably be brand-new to some readers.

Many portions of this book actually can be traced back to two other similarly-styled books about JFK's assassination that were written in the late 1960s -- William Manchester's "The Death Of A President" and Jim Bishop's "The Day Kennedy Was Shot".

This is quite evident when glancing through the 49 pages of source notes in "Four Days", with Manchester's and Bishop's books being referenced many times within the 1,557 citations that Bugliosi provides. ("Reclaiming History", by the way, contains more than 10,000 source citations, which is a figure that probably makes it one of the most-sourced books in publishing history.)

To a person who isn't inclined to believe that virtually every piece of evidence against Lee Harvey Oswald for the murders of President Kennedy and Dallas policeman J.D. Tippit was miraculously and magically "manufactured" or "faked" in some way, "Four Days In November" leaves little to no doubt as to the identity of the one and only person who was responsible for those two homicides.

Or, to put it more bluntly (as Vince Bugliosi does in this quote from "RH"):

"I can tell the readers of this book ["Reclaiming History"] that if anyone in the future maintains to them that Oswald was just a patsy and did not kill Kennedy, that person is either unaware of the evidence against Oswald or simply a very silly person. .... Any denial of Oswald's guilt is not worthy of serious discussion." -- Vincent Bugliosi; Page 969 of "Reclaiming History" (c.2007)

So, if you're interested in just about every last detail imaginable when it comes to those four incredible days in November of 1963 when America lost its President to an assassin's bullet, then "Four Days In November" is undeniably the book to pick up.

And for an even more exhaustive examination of JFK's assassination and the large number of conspiracy theories it spawned (with Mr. Bugliosi reducing each one of those theories to a most-deserved pile of smoldering rubble), "Reclaiming History" is an absolute must-have item for the "True Crime" home library.

Both of Vince Bugliosi's JFK volumes ("Reclaiming History" and "Four Days In November") are books that will (or certainly should) make anybody reading them think twice the next time they hear the words Oswald was just a patsy.

"The millions of Americans who have been hoodwinked into buying into the conspiracy illusion don't believe that Oswald conspired with some other lowly malcontent like himself to assassinate the president. Instead, though most don't clearly articulate the thought in their mind, they believe that Oswald was merely the triggerman for organized crime, a foreign nation, or conspirators who walked the highest corridors of power in our nation's capital. ....

"Not the smallest speck of evidence has ever surfaced that any of the conspiracy community's favorite groups (CIA, mob, etc.) was involved, in any way, in the assassination. Not only the Warren Commission, but the HSCA [House Select Committee on Assassinations] came to the same conclusion. .... But conspiracy theorists, as suspicious as a cat in a new home, find occurrences and events everywhere that feed their suspicions and their already strong predilection to believe that the official version is wrong. ....

"The fact that Kennedy was a powerful public figure was very relevant to Oswald's motivation for killing him. On the other hand, murders of powerful public figures in America by the groups fancied by conspiracy theorists--the CIA, mob, FBI, and military-industrial complex--are absolutely unheard of. Show me a precedent. ....

"The bottom line is that evidence of Oswald's innocence in the Kennedy assassination is about as rare as hundred-dollar bills on the floor of a
flophouse. ....

"Only people who subscribe to rules of absurdity, not rules of life, could possibly believe that a conspiracy to kill Kennedy ever existed. The conspiracy argument in the Kennedy assassination requires the belief that for over forty years a great number of people have been able to keep silent about the plot behind the most important and investigated murder of the 20th century. In other words, it requires a belief in the impossible. ....

"Waiting for the conspiracy theorists to tell the truth is a little like leaving the front-porch light on for Jimmy Hoffa."