HOW TO FRAME A PATSY
(AND HOW NOT TO DO IT)


HOW WOULD *YOU* HAVE "FRAMED" LEE HARVEY OSWALD FOR
PRESIDENT KENNEDY'S MURDER?

(A BETTER QUESTION MIGHT BE -- WOULD *ANYONE* IN THEIR
RIGHT MIND HAVE DONE IT THE WAY MANY CONSPIRACY THEORISTS
THINK IT *WAS* DONE IN 1963?)

Many JFK assassination conspiracists favor the idea that President John
F. Kennedy's killer (Lee Harvey Oswald) was "set up" from the
beginning, and framed as the "Patsy" to take the blame (alone) for the
President's murder in Dallas, Texas, on November 22nd, 1963.

Such a complicated Patsy scheme might seem like a reasonable solution
to some Warren Commission disbelievers when looking at selected pieces
of evidence in hindsight, many years after the event. But I'm just
wondering how many of those same people (if given the wretched
responsibility of "setting up" Oswald as the one lone fall guy) would
really have chosen to frame Mr. Oswald in the manner that is so widely
believed by CTers?

Now, if I was a rotten, dirty, lowlife killer who was planning the
assassination of an American President in a large U.S. city with many
witnesses potentially watching (and filming) my every move -- and also
wanting to pin this crime on ONE LONE PATSY named Oswald, who worked in
a building to the rear of the President's vehicle......

1.) Use only one shooter. (I most certainly would NOT, under any
circumstances, use gobs of extra gunmen located at various places
throughout Dealey Plaza. That multi-gun idea is just plain nutty to
begin with.)

2.) Shoot from where my one and only "Patsy" is supposed to be located
-- the southeast corner window on the 6th Floor of the Texas School
Book Depository Building on Elm Street.

4.) Fire three shots (or however many this single shooter could squeeze
off in the allotted time while Kennedy was in his sights; then place a
corresponding number of spent hulls/shells below the "Sniper's Nest"
window -- of course, these really won't be "planted" shells near the
window; because, via this plan, Oswald's own gun IS being utilized;
therefore, the appropriate number of shells will drop to the floor
accordingly).

5.) To reiterate the obvious -- Absolutely no frontal shots can be
fired. Frontal shots striking the target would have been suicide for me
and my other lowlife, conspiratorial plotters/cohorts.

6.) I'd find a way to keep my Patsy on the "floor of death" during the
shooting, thereby ensuring the fact that Oswald (my one and only Patsy)
does not have a viable and supportable alibi at precisely 12:30 PM on
November 22nd.

7.) I'd probably then also shoot and kill Oswald dead right there on
the 6th Floor of the Depository, and "stage" this Oswald murder as a
"suicide". This way, there's certainly no need for Jack Ruby's
intervention two days later. Letting the "Patsy" live for even an hour
after the assassination just does not make any sense in the overall
"Patsy" plot. If there's going to be a need to "rub him out", waiting
until November 24th (AFTER he's had a chance to spill his guts to a
National TV audience for two solid days) is simply a foolhardy plan on
the part of the plotters. Kill him immediately (in the Depository) and
be done with it.

In my opinion, the above scenario is the only conceivable way such a
"Frame The Lone Patsy" plot could have possibly been pulled off
successfully (and the only type plan of this sort that any sane and
non-suicidal plotters/conspirators would have considered utilizing on
11-22-63).

The originators and developers of any "Frame The Patsy" scheme that
involves multiple shooters firing weapons at the same target at the
very same time would have been better off if they had attempted to
frame TWO different "Patsies" that day in Dallas (Oswald plus a second
fall guy firing from the front). Because trying to hide the obvious
evidence from 3 or 4 shooters (and 5 to 10 potential bullet wounds from
all of these missiles) is a task that even Superman wouldn't want to
tackle.

Many CTers seem to feel that if the conspirators had gotten a "JFK Kill
Shot" from the REAR immediately after the shooting started, then no
frontal shots would have been needed (or fired) -- and therefore the
"Frame Oswald" plan would have proceeded in a more orderly manner.

However, it seems that many of these same CTers ALSO favor the
likelihood that Shot #1 was a shot from the front (that hit President
Kennedy in the throat).

This first shot from the front totally destroys the other theory that
has the first shot definitely coming from the REAR (which many
theorists feel also served as a "diversionary" shot to get everyone
looking toward the Sniper's Nest, where the "Patsy" is supposed to be
located).

That's another example of CTers not knowing which "theory" to follow,
it seems. For, how can a person who believes that the first shot was
the proverbial "Diversionary & Hopefully 'Kill' Shot from the Rear"
ALSO believe that the first shot came from the front and hit JFK in the
neck?

So many conspiracy theories -- so little sense do they make. 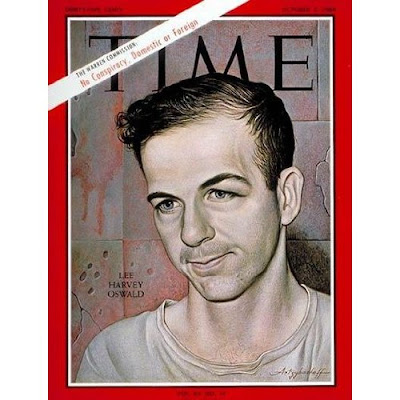