Behind all of the somber nods and frowns during that entire weekend [of JFK's assassination], I've always thought this photo spoke volumes. Even the guy who took it said he thought it was "sinister": 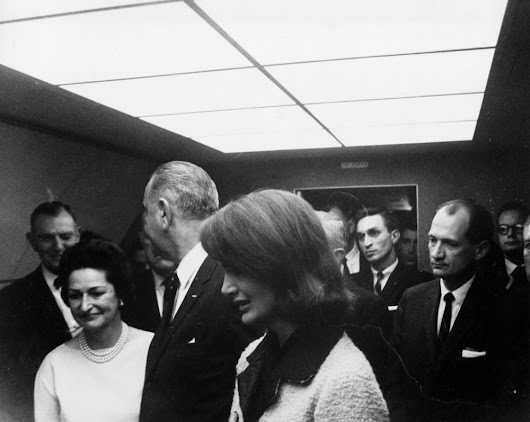 That infamous Albert Thomas "wink" photo seconds after LBJ's swearing in on Air Force One is still as disturbing and disgusting and sickening and suspicious to me now as the first time I saw this. .... That picture says a thousand words (maybe not quite a thousand) about LBJ and his crooked cronies...in my opinion.

But the fact that Albert Thomas winked at Johnson at a time when Thomas certainly had to know that photographer Cecil Stoughton was present in that super-small compartment of Air Force One (and everybody could probably even hear Stoughton's camera shutter clicking away as he took all of these pictures of the swearing-in scene) is virtual proof in and of itself that Albert Thomas was certainly not one of Lyndon Johnson's "crooked cronies" (certainly with respect to JFK's murder at any rate).

If a situation had existed in which Albert Thomas did, in fact, possess some knowledge of a conspiracy plot which was designed to elevate LBJ to the highest office in the land, with Thomas then winking at Johnson right after he was sworn in (serving as a congratulatory message to President Johnson that the assassination plot had been pulled off successfully), with Thomas knowing full well that his "wink" would very likely be captured on film by White House photographer Cecil Stoughton, then I think it would be safe to say that Representative Albert Thomas of Houston, Texas, would have been the top candidate for the "Brass Balls Award For 1963".

Anybody disagree with that?

Big ol' '60s camera in his face and he covertly winks?

Right. That's what a lot of CTers believe. It's preposterous.

Von Pein doesn't attempt to explain it, I noticed.

I think Thomas' wink was basically the equivalent of a "Good Luck" handshake. Nothing more. And how anyone can think it is anything more than that is beyond me, seeing as how Thomas had to know that Stoughton was snapping away with his camera just a few feet away.

Do you, Ted, really think Thomas' gonads were THAT large?

I think perhaps he had no love for JFK.

You can't be so smug on this one, David.

1. Thomas was dying of terminal cancer, and may not have cared much if Stoughton saw him wink.

2. Stoughton himself thought the wink was suspicious.

3. After LBJ's behavior on the plane became an issue in 1967 (with the release of the Manchester book), all of Stoughton's photos were published. With one exception. The wink photo.

4. When David Lifton contacted the LBJ Library to purchase copies of all the Stoughton photos, they sent him a copy of a print of the wink photo, as the negative had disappeared.

5. Richard Trask confirmed that the negative to the wink photo is missing from the Library.

Well, heck. This suggests that someone at the Library, almost certainly working for LBJ, sifted through Stoughton's photos and destroyed the negative of the wink photo. But forgot to look through the initial prints, and destroy the original print as well. Hmmm...

Thanks for the extra info, Pat.

But whether he was sick or not, I think you'd have to agree with me, that if Albert Thomas had been privy to some kind of assassination conspiracy plot to murder JFK, the wink that Thomas threw to Kennedy's successor in full view of Cecil Stoughton's camera lens would have been a demonstration of blatant brashness and boldness that we aren't likely to see very often from someone who possesses knowledge of a covert nature—knowledge which that person certainly would not have a desire to flaunt so conspicuously and unnecessarily.

And I also have to assume that the conspiracy theorists who think Thomas' wink should be placed in the "suspicious" or "sinister" categories must also believe that President Kennedy's praise and admiration of Representative Thomas during JFK's speech in Houston the night before the assassination (audio below) was praise and admiration that most certainly was not reciprocated by Mr. Thomas toward President Kennedy.