If Walter Cronkite was putting disinformation out there...

He wasn't. Oswald did it. And probably did it alone. And all reasonable people who have examined the case for several years know that fact.

Plus, it might surprise a lot of the conspiracy crowd to know just how far in the extreme MINORITY they are with regard to the question of "WAS LEE OSWALD A GUNMAN IN DEALEY PLAZA?" 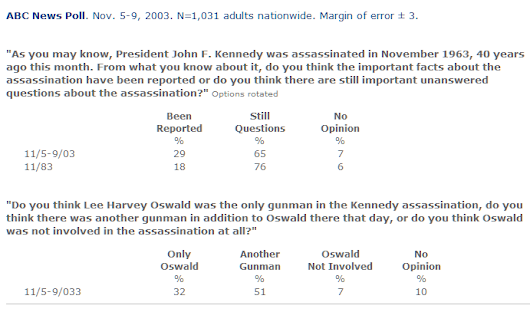 
That's quite revealing and interesting, IMO. (Especially when we consider how many "Anybody But Oswald" conspiracy nuts are populating the Internet, circa 2009.)

Now, I'm not saying that the majority of those 1,031 ABC News Poll respondents are well-schooled in the details of the JFK case. Most people aren't. But, still, it shows a general feeling among over 1,000 Americans that Oswald was certainly not the "innocent patsy" that so many "Anybody But Oswald" theorists want to pretend he was.

Actually, I firmly suspect that you are actively putting out disinformation regarding JFK on purpose, so it makes sense that you would want to use the Walter Cronkite issue to try and make us look bad over at jfkmurdersolved.

I'm actively putting out the FACTS AND EVIDENCE connected with the JFK assassination. That's what I'm doing. And all reasonable people know this too.

But thanks for today's laugh, Pasquale. I always enjoy it (immensely!) when somebody decides that I'm a "CIA agent" or a "WC shill" or a "Bugliosi mouthpiece" or a "WC apologist" (that last one is my favorite).

When I hear such things, it only makes me smile broadly....because it only confirms to me just how WRONG the conspiracy theorists can be. (And, of course, they are wrong about virtually everything regarding the JFK case.)

If you seriously think Bugliosi's book is worth more than toilet paper, either you don't know what you're talking about, or you are in on the game of deceiving the public with him.

Bugliosi's book is the JFK Bible. It reveals the truth about JFK's assassination...without a doubt.

And the constant whining and crying of a bunch of Internet conspiracists will never turn Mr. Bugliosi's masterwork "Reclaiming History" into "toilet paper". Instead, it's 2,800 pages of facts, evidence, SOURCES, and (above all) common sense.

Funny thing is, I'm fairly certain that the people who love to continually bash Vince Bugliosi's magnificent book have never even read a single chapter of the book!