Dr. Humes' *admission* that he burned some of the most vital evidence in the assassination of the President *does not* exonerate him from a cover-up, be it benign or perfidious.

Therefore, all CTers will choose to believe the "conspiratorial" line of thought regarding Dr. Humes' note-burning (quite obviously). Even though the innocent explanation always given by Humes should hold the same weight as the CT version. (But it never will, because CTers are paranoids and MUST believe the "shady" option even if they have to put the "shady" intent in the theory themselves...and they have, of course.)

So, to do a little table-turning regarding "things people say" --- Oswald's saying "I'm just a patsy" does not make him a patsy automatically and does not erase the mile-high stack of physical evidence supporting his lone guilt in two murders on 11/22.

I cannot wait to see Vince Bugliosi rip to shreds the weak-ass CT argument of Oswald being a mere unwitting "Patsy" (with many CTers ACTUALLY taking the word of the accused double-murderer, at face value).

Vince will demolish the notion that Oswald was (or even could have been, or WOULD have been) an innocent "Patsy", set up by a group of always-unknown plotters, using XX number of guns to pelt the target with obvious non-Oswald evidence.

VB will have no trouble destroying that CT myth. Heck, I can even do that...and I'm not even close to being in Vincent's league on this subject.

I can't wait to see the look on your face when it is announced that Bugliosi's book has been canceled.

It looks like Marsh's prediction didn't quite come true..... 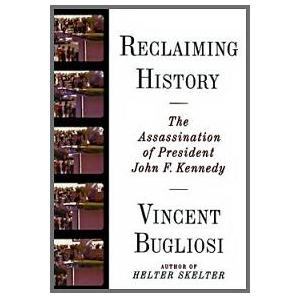 People get lucky, but what I am saying is that your scenario requires as many, or more, presuppositions as most CTs.

It requires NO "presuppositions" in point of fact.

Because the physical evidence left behind by the murder weapon TELLS US that Oswald's rifle (crappy as it may have been) was the ONLY weapon that fired any bullets that hit anyone in JFK's car on 11/22.

Similar to the useless CT arguments regarding the Tippit murder (that argument being: Oswald couldn't have gotten to 10th St. in time to shoot Tippit) .... a similar type of CT argument proves to be totally useless and moot with respect to the JFK murder weapon as well (with that invalid CT argument being: Oswald's rifle could not possibly have been the gun used to kill JFK because it was a rusty, defective, mis-aligned POS that only cost $21.45).

Neither of the above arguments is worth a hill of beans ... because of OTHER HARD EVIDENCE that trumps both CT arguments 100%.

There is still, to this day, ZERO hunks of physical ballistics evidence that indicates any weapon other than Oswald's M-C rifle hit anyone on Nov. 22nd.

Which, therefore, still indicates to this day that if a multi-gun conspiracy existed in Dealey Plaza (as virtually all CTers believe), there was a wide-sweeping, comprehensive, grab-every-non-LHO-bullet cover-up job performed by XX number of conspirators after the fact -- including the EXTRA, unexpected task of getting rid of XX number of bullets that hit a person (John B. Connally) other than the intended target.

And these plotters did it all just perfectly, per most CT accounts, even though Connally and Kennedy could very well have had XX number of missiles stuck inside them when they arrived at Parkland.

And they DID have multiple NON-OSWALD bullets inside them too, per CT accounts of events --- e.g., JFK's neck bullet, caused by some oddball low-powered weapon....plus JFK's back-wound bullet, again caused by a low-powered weapon evidently, since it only goes into him a couple of inches; these wounds make NO sense from the assassins' POV, because why on Earth would any pro assassins shoot TWO dum-dum type of non-fatal bullets at the target; that's pure stupidity....plus the XX number of bullets that CTers say pelted Gov. Connally, which were all never seen by any non-plotters either.

The hide-the-bullets-before-somebody-gets-wise plot only gets sillier and sillier the more any logical person thinks about it.

But the LHO/LN/3-Shot scenario fits perfectly, to a tee, right down the line -- from the TSBD evidence (rifle/shells), to the fragments inside the limo, to the witness testimony, to the SBT alignment, to CE399, to the autopsy report, and to the fact that NO OTHER BULLETS were found anyplace that could be connected with the victims' wounds.

And to think that this amount of LHO-hanging stuff could have possibly ALL been "faked" and/or "arranged" by evil plotters after the fact in such a short time period is to believe in magic (literally).

To repeat a quote I've mentioned before from Larry Sturdivan's well-done book "The JFK Myths" (and it's a quote every CTer should jot down and stick to their refrigerator for future reference, because it makes so much logical sense) ----

"While one of the pieces of physical evidence could conceivably have been faked by an expert, there is no possibility that an expert, or team of super-experts, could have fabricated the perfectly coordinated whole, with superhuman abilities to fake physical evidence that is in complete agreement with all the other faked evidence." --- "The JFK Myths"; Page 246