The bottom black line in the photo on the left [seen below] isn't supposed to be going across the "top of the shoulder", Tony. Why in the world would you think such a thing in the first place? It's a line that was drawn straight across from President Kennedy's TIE KNOT (i.e., the location of where there was a bullet hole in JFK's throat on 11/22/63).

With some obvious "alignment" limitations between the two photos shown below, I think whoever created this montage of images lined things up pretty well....as accurately as things could be "lined up" when attempting to draw black lines on two-dimensional photos, even though the object being depicted (JFK's body) is really in three dimensions (quite obviously), and the two pictures were probably also taken from different distances: 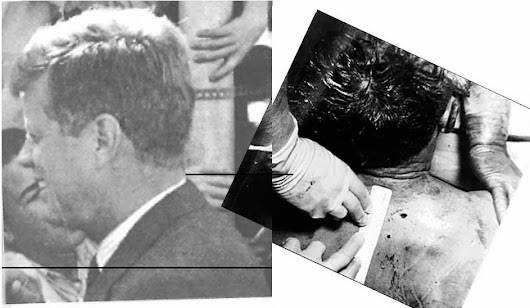 The bottom line most certainly is at the level of the shoulder. The top of the shoulder on the autopsy photo is much higher. You know that this proves they are not to scale and are presenting a false comparison. That is why you praise it.

It's quite obvious that the comparison was meant to deceive. That's why you
use it.

Which means that you (Anthony Marsh) must believe that JFK's tie knot is at SHOULDER LEVEL too...because that line is drawn straight across from Kennedy's tie knot.

You've lost this one, Tony. Why continue to make yourself look silly by pretending that Kennedy's tie knot is at shoulder level?