I recently added the picture below to my Kennedy Photo Gallery. It's a rarely-seen view of Lee Harvey Oswald being escorted through the Dallas police basement on 11/24/63: Wow! It would appear that Oswald is looking right at Ruby and wondering what the hell he was doing there.

Yes, John. Oswald has turned his head just a second or so before Ruby lunged forward. Oswald does indeed appear to be looking right at Ruby. He's probably detected Ruby's initial movement forward, which drew his attention to his left.

It's too bad that Detectives Leavelle and Graves weren't as observant as Oswald (although James Leavelle has always said he DID see Ruby approaching, with gun at his side; but it's quite obvious that Leavelle is not looking toward Ruby at all in the above photograph; so Leavelle must have only seen Ruby via his peripheral vision).

If Leavelle's and Graves' heads were turned in the same manner as Oswald's in the above picture, you never know, a murder might have been averted.

My point is he [Oswald] very much knew who Ruby was. Beverly Oliver is on camera saying Ruby introduced Oswald to her.

B.S. You are calling her a liar. Oswald's Uncle was mob connected and so was Ruby. Ruby knew Oswald from [when] he was just a kid.

Hey -- if it helps, Beverly Oliver is very clearly a liar, so there's that.

But Ruby is right in the MIDDLE of that pack of reporters, Mark. So Oswald must have seen Ruby approaching. He couldn't have missed him.

David, I agree. I do also think he would have seen him approaching. Just to make myself clear... I do not think LHO was looking at Ruby because he knew him or looking and thinking "Hey, there's my buddy Jack".

Ruby's lie about sparing Jackie having to testify at Oswald's trial is so lame. What could she have added concerning Oswald or any shooter?

Ruby produced a variety of motives for shooting Oswald. Nobody can know which one was the truth. Could be that a combination of ALL of them was the truth.

But, in reality, since we can KNOW for a fact that Ruby did not go downtown on Sunday with the thought in mind of murdering Lee Oswald (there's ample proof--"timeline-wise"--to prove that fact beyond all possible reasonable doubt), then the "motive" question is a moot one.

Ruby killed Oswald on the spur of the moment, and that certainly eliminates a PRE-PLANNED conspiratorial "rub-out" of Lee H. Oswald.

None of you small-minded people has the guts to read Crossfire. Page after page of witnesses said they knew each other.

I'm gonna go out on a limb here and say that you and I are not the only ones here who have read Crossfire. In fact, that was the first JFK book I ever read.

Just because someone writes something down and gets it published does not make it true. If you go and look at the evidence for yourself, NOT through the eyes of Jim Marrs, you will have a much stronger understanding of the case.

If Oswald HAD seen Ruby and DID know him, Oswald would have kept his eyes on him and/or called out to him.

All that Oswald does right there is glance at the reporter, Ike Pappas, in the trench coat. Ike has just gotten Oswald's attention by asking him a question and is clearly seen sticking his mic towards Oswald to get Oswald's answer. By looking back straight ahead within a second, it doesn't appear that Oswald had any intentions of answering him.

I believe there is video footage from the side Ruby was standing on and you can see Oswald's head turns too early to be looking at Ruby and is looking at the reporter. 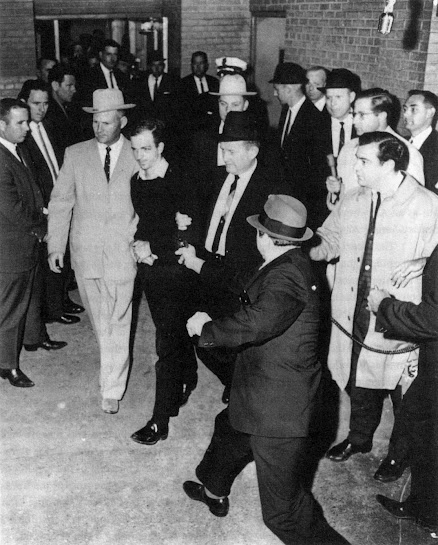 Regardless of his look, it's just a straight-faced glance which any person in his circumstance would pull. His head turn is too early to be looking at Ruby. I'm sure David Von Pein will dig out the video.

It is a rather intense look.

So is your profile picture, John. :)

Oswald's "look" in this picture appears about the same as it was throughout the entire time he was in custody. I see no difference.

Here's a good view of Oswald's head turn just as Ruby lurches forward. Ruby appears to be "clear" of the reporters and Oswald's head is still turned to the left, looking in the direction of Mr. Ruby. Not that this really matters much, but here is the super-slo-mo video from CBS-TV:

Another thing -- somebody incorrectly named the group Oswald was passing out the leaflets for. At the police station. Jack Ruby is there and on film correcting him.

It proves he knew Oswald or how else would he know about the Fair Play for Cuba and what Oswald had been doing? Hardly anyone in the country had ever heard of it. Ruby did.

How would a nightclub owner in Dallas know what Oswald was doing in New Orleans?

John, you need to shed some of those myths you seem to like to talk about. Ruby could very easily have learned about the "Fair Play For Cuba Committee" during the afternoon and evening of November 22, hours before he (among others!) corrected Henry Wade at about midnight.

I can dig up the video (if you want it) of NBC's Frank McGee saying that Oswald belonged to the FPCC many hours before Wade's midnight press gathering. And if McGee was saying it, you can bet all the other TV and radio outlets had the same info regarding the FPCC.

Jack Ruby could have possibly even read about Oswald's affiliation with the FPCC in the newspaper on Friday afternoon or Friday evening, November 22.

We know from Bob Schieffer's interviews that the Fort Worth Star-Telegram was churning out several "EXTRA" editions of the paper throughout the day on Friday. And I would guess that the other Dallas area papers were also coming out with Extras too.

And I can confirm that the words "FAIR PLAY FOR CUBA COMMITTEE" positively were appearing in some U.S. newspapers before midnight on Friday. Here's one such example--the Santa Barbara News-Press (dated 11/22/63). Check the third column under the headline "Suspect Is Seized" [click to enlarge]: 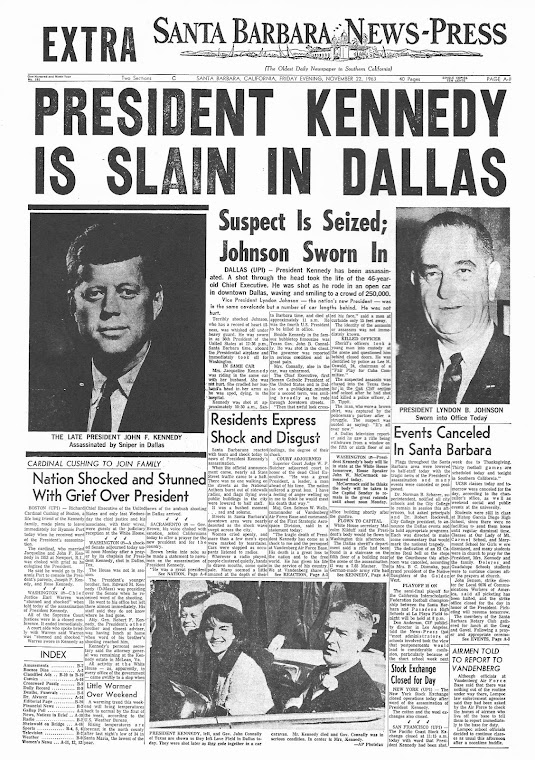 From where? Why was he [Ruby] ever allowed into the basement with newsmen? He was in the police station so many times. The authorities didn't even know. That's my proof. It's no myth. The police barely knew if he was Oswald or Hidell. What ordinary loser has false papers anyhow?

You people just stick your heads in the sand and ignore all the obvious. Oswald also had a Minox spy camera. He buys a 12-dollar gun and owns an expensive camera? Doesn't that sound strange?

Notice how John subtly changes the subject from "HOW COULD JACK RUBY HAVE POSSIBLY KNOWN ABOUT THE FAIR PLAY FOR CUBA COMMITTEE AS EARLY AS FRIDAY NIGHT?" ... to ... "WHY WAS RUBY ALLOWED IN THE BASEMENT WITH NEWSMEN?" and "OSWALD OWNED A MINOX CAMERA".

Nice dodge, John. But if you've ever listened to interviews with many of the reporters who were covering the story at City Hall that November weekend, you'd easily be able to tell that the security around City Hall (DPD) wasn't very tight at all on Friday.

And since Ruby personally knew a lot of Dallas policemen, it would probably be pretty easy for him to get into the building and be able to stay there for Henry Wade's midnight news conference. Plus, Ruby was posing as a reporter (complete with notebook and pencil).

Also, regarding the FPCC info that Ruby spouted out:

In addition to what DVP posted, it was on KLIF or KBOX radio in late afternoon or early evening of the 22nd. I actually researched that very question for another CT researcher a few months ago. If requested, I can dig that up again where the radio commentator clearly states Oswald was a member of FPCC.

From DVP's radio archive: WBAP (Bulletins Video) .... Paul Harvey at the 12:00 minute mark, states Oswald was in the FPCC.

Important thing to remember, this info was on the radio before Henry Wade's press conference where Ruby corrects Wade with the FPCC. So naturally the info of Oswald being a "communist" and a supporter of Fidel Castro was of great interest to the American people.

Thanks, Steve. I very likely have several more examples of the FPCC being revealed on 11/22 on radio and TV in my collection somewhere.

BTW, here's the Paul Harvey clip Steve Roe referred to earlier (at about 2:25):

John, what do you feel was umbrella man's relevance to the case?

Signaller -- but the strange twist is they claimed he was Louis Witt and my cousin from the Dallas area married a Witt.

As if the shooters needed to be "signalled" before unleashing their assault on Kennedy. Hilarity at its peak there.

Much like Jim DiEugenio's theory about the two "horn honks" in the basement being "signals" to Jack Ruby. You see, Jack was too dumb to know when to fire. He needed a guy to toot his horn first. (Oh, my bladder.)

They weren't signals to Ruby. They were signals to the cops that Ruby was in place. Bring him on!

John doesn't even know the chronology of the basement horn honks. The last of the honks was one second before Ruby shot LHO. And John thinks THAT honk was a signal to the COPS to lead Oswald out to the basement. LOL.

That's dumb. When was the FIRST honk?

The first of the two honks was just AFTER Oswald and Leavelle stepped into the basement from the jail office. So it obviously was TOO LATE to be a "signal" to start marching Oswald out. Just watch:

The truth is that no honest police department would have kept letting the press be all over Oswald. They were responsible for letting Ruby in among the newsmen that had no business being there.

I agree with you John that the DPD blew it in the basement on 11/24/63 (big time). But hindsight is always 20/20, isn't it? Just like the Secret Service blew it by letting JFK drive through Dealey Plaza in an open car.

But it usually takes a tragedy to make people stop doing things that ordinarily cause no harm to anyone -- such as a President riding in countless motorcades in an open-top convertible prior to November 22 without being shot. After Dallas, that's never happened again.

Why honk the horn if nobody is in the way?

That's just it, John. I think some people WERE probably "in the way" of the car honking its horn. Because the horn-honking vehicle was probably the same car that was being BACKED UP into position (with its bumper actually touching Ruby's leg during the shooting).

I don't think there was another police car IN MOTION at that exact time other than the car being backed up to take Oswald to the County Jail. I've always thought that it was that car that probably was honking at some reporters or camera people to get out of its way.

It's possible that the scenario I just laid out about the horn-honking police car is even confirmed somewhere in the Warren Commission testimony of some of the policemen or reporters who were in the basement at the time of the shooting. I don't know for sure if there is such testimony, but I wouldn't be surprised if I found something like that in the official records somewhere.

No, the newsmen were all lined up on the side.

In fact, at the 3:13 mark in the below video, we can even see Captain Fritz shoving a man aside to clear the area. So there were definitely at least a few people on that Commerce St. side of the basement, and the police car was probably honking its horn at those people to keep from hitting them as it backed up: