Rubbish! There's NO WAY a couple of small bullet fragments from the lead CORE CORE CORE of a bullet can be traced to a particular gun. The CORE of the bullet does not come into contact with the rifling in the barrel of a gun. The part of the bullet that contacts the rifling is the JACKET. .... I'd be embarrassed if I posted something as STUPID as this.

For a person who loves to spout on and on about the evidence in the JFK case, Walter Cakebread sometimes displays an incredible (and laughable) lack of knowledge about some of the most basic things concerning the case.

Walt seems to think that the two bullet fragments recovered from the front seat area of President Kennedy's limousine (CE567 and CE569) contained ONLY lead, while containing NONE of the copper jacket of the bullet at all.

But such a statement by Walt is just blatant ignorance, because as can easily be seen in photographs of the two front-seat fragments [as can be viewed here], ample copper is plainly visible. And, in fact, CE569 contains nothing BUT a portion of the copper jacket of the bullet that was fired by Lee Harvey Oswald at Zapruder frame #313 (which was the head shot which killed JFK).

There is none of the lead core to be found in CE569 at all, which, of course, is the reason why CE569 was not subjected to Neutron Activation Analysis by Dr. Vincent P. Guinn in the 1970s for the HSCA.

So, Walt (as always) ends up looking like a donkey's rear-end here. But by this time, we're all accustomed to Walt shooting blanks on a daily basis, such as his "BRENNAN DESCRIBED..." comedy routine, which can now be found in my "Assorted Assassination Arguments" series (in Part 575).

And it's hard to beat Part 575 for a good healthy belly laugh at the (deserved) expense of a conspiracy-happy idiot by the name of Walter Cakebread.

Whatta foolish liar you are, Von Pea Brain. Bullets that are recovered from a victim or a crime scene can often be traced to the gun that fired them by microscopic viewing of the recovered bullet. (If the bullet hasn't struck a hard material like bone or steel or concrete.)

The rifling in the barrel of a gun will often leave the "finger print" of the rifling on the JACKET of the bullet. The lead CORE is surrounded by the jacket and the core never comes in contact with the rifling.

Typical of an outer-fringe conspiracy theorist, after having just been proved wrong about his previous "lead core" argument (i.e., after I proved that CE567/569 didn't contain JUST the lead core of the bullet material), Walt continues to act as if the two front-seat fragments still consisted of nothing but the lead core. Incredible. 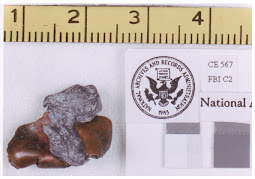 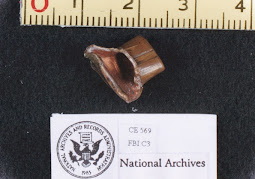 If a bullet is shattered into small pieces it is IMPOSSIBLE to trace those small fragments to any particular gun. Anybody who would make the claim that the small fragments found in the Lincoln could be traced to ANY PARTICULAR gun is a damned fool liar!

Several firearms identification experts for both the Warren Commission and the House Select Committee on Assassinations came to the conclusion that the two front-seat bullet fragments could BOTH be traced conclusively to Lee Harvey Oswald's Carcano Rifle #C2766.

But, I guess we should all just toss in the trash all of the following official testimony provided by experts in the field of firearms identification, because Walt Cakebread apparently knows a lot more about these things than ANY of these firearms experts. Right, Walter? These guys were all liars, eh? .....

JOHN J. McCLOY - And you would say the same thing of Commission Exhibit 399, the bullet 399 was fired from that rifle?

Mr. McCLOY - Was likewise a portion of a bullet fired from that rifle?

Mr. McCLOY - You have no doubt about any of those?

MELVIN EISENBERG - Mr. Frazier, did you examine this bullet fragment with a view to determining whether it had been fired from the rifle, Exhibit 139?

Mr. EISENBERG - What was your conclusion?

Mr. FRAZIER - This bullet fragment, Exhibit 569, was fired from this particular rifle, 139.

Mr. EISENBERG - Again to the exclusion of all other rifles?

Mr. EISENBERG. That would be to the exclusion of all other weapons?

I, Charles L. Killion, Special Agent of the Federal Bureau of Investigation, do hereby state that I have reviewed the testimonies of Robert A. Frazier on March 31 and May 13, 1964, and testimonies of Cortlandt Cunningham on March 11 and April 1, 1964, before the President's Commission on the assassination of President John F. Kennedy and I agree with the conclusions stated therein.

JAMES McDONALD. And you took the fragment, is it labeled CE-567, and microscopically compared it with the test-fired bullet from the FBI that was fired out of 139?

ANDREW M. NEWQUIST. That is correct.

Mr. McDONALD. And what was the result of your examination?

Mr. NEWQUIST. From mine and the panel's comparison, of these two exhibits, it is our opinion, they had been fired from the same firearm.

Mr. McDONALD. In other words, CE-567, which was the bullet fragment found on the front seat of the Presidential limousine, it is your conclusion through your analysis that it was fired from CE-139, which is before us this morning?

Mr. NEWQUIST. That is correct.

Mr. McDONALD. What did you do regarding CE-569?

Mr. NEWQUIST. The same being true for CE-569, it was placed on a microscope and compared with the FBI test bullets fired from the Oswald rifle to observe the similarity or dissimilarity, the result or a photographic representation of the identification is in the upper photograph. CE-569 on the left side of the line of demarcation, the FBI test, CE-572 is on the right side showing the concurrence of the individual characteristics as seen on the comparison microscope.

Mr. McDONALD. And the conclusion is that they were both fired from the same weapon?

Mr. NEWQUIST. That is correct.