JACK RUBY AND THE BASEMENT
(PART 2) 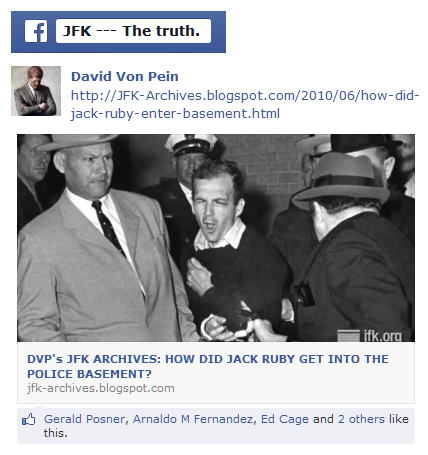 Ruby, a well-known night club owner, knew many police officers...and he was allowed to just walk down to the basement; and he always carried a pistol, due to the large amounts of cash he would carry sometimes.

Gary Mack recently got my attention with his observation about a witness in the NBC footage (apparently Blackie Harrison) indicating that Ruby had come over the railing.

I still think that the weight of the evidence points to the ramp entrance, but Harrison's statement is (how shall I put this?) inconvenient.

Of course, there are at least 2 witnesses who claim they saw Ruby coming right down the ramp, just as Ruby said he did. One such witness (Nap Daniels) talks about it in Mark Lane's film, "Rush To Judgment" (at 1:10:00).

There's a problem with this account though, since Ruby had a hat on, and this witness claims the man who entered via the ramp was "balding" on the top of his head. How could he see through Ruby's fedora?

David, Ruby could have been holding his hat in his hand when walking down the ramp.

I was unaware there was a railing; I never saw it. Where is it in relation to the ramp (which is my first choice for Ruby's entrance)?

Here's a good look at the railing Ruby would have had to jump over: 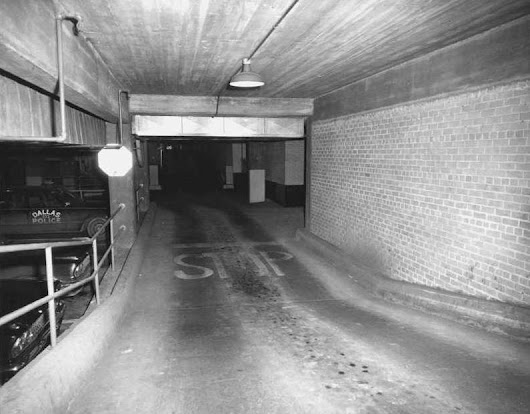 Gary Mack and I are in agreement that Ruby's encounter with Oswald was strictly a chance occurrence. In fact, he's probably done as much research as anyone in trying to find a way for Ruby's arrival to have been synchronized with Oswald's transfer, and he's convinced there is no way it could have happened deliberately.

However, he doesn't think Ruby came down the ramp, as Ruby maintained, but that he entered through a side entrance, walked across the parking area, and climbed over the railing.

My initial reaction to this was dismissive, but Gary pointed out a bit of evidence with which I was unfamiliar and is hard to ignore. It's contained in the unedited NBC film of the shooting and the aftermath, with Tom Pettit narrating.

Bottom line is this: Ruby was very familiar with many in the DPD and you can see one newsman mention that he thought that Ruby was a part of the news media, but other policemen knew Ruby and that's how Ruby had access to the hallway when they took Oswald from one room to another.

Whether Ruby jumped the railing or walked down the ramp, he was still allowed to be in the mix of reporters.

I was listening to I believe the KLIF (or was it KBOX?) radio recordings on the Oswald shooting. I think it was Gary DeLaune, the reporter who was out of breath after running back into the radio studio saying Ruby came in with a TV crew down the ramp past the armored vehicle.

Which would mean Ruby came down the OTHER ramp--on Commerce St.

Yep, I believe it was KLIF, I had listened to it many months ago and marked that comment time-wise on the audio. It is hard to hear, as DeLaune was out of breath, but he said other reporters saw him come down the ramp with a TV crew.

Ruby snuck in via the ramp; not difficult to time it right, IMO. Going "over the railing" is not consistent with a low profile entry attempt at all.

From my "Basement" article above:

"Via the scenario of a LONE-NUT named Ruby entering the basement in the manner you [Gary Mack] suggest via the back entrance (and NOT a person named Ruby who was AIDED by the cops or anyone else in order to get into the basement), there would have been absolutely NO REASON under the sun for Ruby to lie to the police afterward and say he entered by way of the Main Street ramp vs. the way he would have actually entered--via the back entrance. Can you think of one good reason why a "LONE-NUT RUBY" would want to lie about such a thing? I can't." -- DVP; February 2008

No DVP, I can't. Good point--and I thought of that too.

Memories fade. That's why it is important to get the facts as soon as it happened. And bogus stuff comes out on those initial reports, but still important as DVP posted those old radio broadcasts.

And please note the initial errors in the reports regarding Oswald's murder too -- they were saying Oswald was shot "in the side of the face". That was quickly cleared up, but it was reported by KLIF.

The thing that always tickles my funnybone a little bit when watching and listening to the media coverage of Ruby killing Oswald is the fact that right after it happened, the reporters who were RIGHT THERE and saw it with their own eyes still felt the need to interview OTHER reporters and ask them to confirm it for them.

It's almost as if Tom Pettit and Bob Huffaker just couldn't believe their OWN eyes and wanted to make sure they weren't dreaming the whole thing, so they asked Geoff Edwards of KHJ in L.A. and the French reporter for confirmation and verification. ... "I saw the flash right on his black sweat-uh!"

Yes indeed David, they were standing right there, and the shock of the moment stunned them. They couldn't explain what happened. Their minds could have [been] on something else, like Where am I going next?, How do I look?, What am I going to say in my next transmission?

A very valid point you bring up David, and one you can easily transpose to the Dealey Plaza shooting. EXCELLENT, Mr. Von Pein.

But important to state, DeLaune did not see Ruby come in. The other reporters were saying they saw Ruby come in with the TV cameramen.

I'll pinpoint that Gary DeLaune audio when I get back to town.

The Gary DeLaune 11/24/63 audio is below, Steve. It's quite remarkable, in that Gary can barely speak. I have never heard a person so "out of breath" and for such an extended period. I really thought he might keel over with a coronary the way he was panting. Gary's report starts at about 12:00:

And to elaborate on your point....when something unexpectedly happens....you never know what's on people's minds when it happened. This is one of the hardest concepts to get across to a CTer. Everybody was caught off guard when it happened, hence all the various and inconsistent testimony.

The story about Ruby entering with a camera crew was investigated and debunked. [Via the HSCA Hearings.]

Steve, you are dead-on there. That's why I really hate when CTers go on about the Dealey Plaza earwitnesses and guys like [Amos] Euins who heard the last two shots in rapid succession...too quick for a bolt action, i.e. conspiracy!

But logically, we are talking about an event in time taking no more than 8 seconds and [people] are in shock and disbelief and are asked to recall accurately the timing of the shots; and CTers expect them to be unrealistically accurate.

This is a common fallacy with a lot of CTers -- there's no logical, rational thinking-it-through thought process going on. It's all about throwing up inconsistencies and trying to win a petty argument.

Good points being made by everybody here. Thank you.

And with respect to the EARwitness testimony, I always make an attempt to get the conspiracy theorists to try and properly (and sensibly) evaluate the witness chart shown below (which, btw, has since been updated by John McAdams, with John's new version of this chart showing that even FEWER witnesses actually fall into the "Two Directions" slice of this pie).

Now, look at these figures and just try to imagine the type of multi-gunmen shooting taking place that is advocated by people like Oliver Stone and Robert Groden, with almost no one hearing shots from MULTIPLE directions at all: 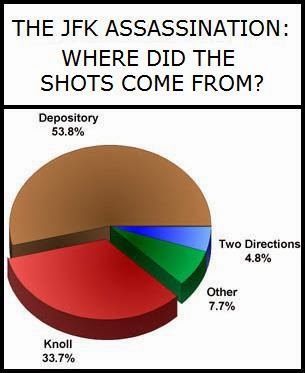