I was surprised that Professor McAdams didn't respond to DiEugenio's repulsive and far-fetched 2-part anti-McAdams smear piece that's been online for a long time now [linked below].

It could be that .John did respond in some fashion and I just missed it.

But it could also be a situation where DiEugenio's accusations and slurs against John are so outrageous (and downright hilarious--which they are, of course) that Mr. McAdams felt no need to reply at all. Just a smile and a shake of the head are enough.

However, in my own personal case of being attacked in print by Jimmy D. four years ago, I could not resist getting in a few healthy swings in rebuttal to DiEugenio's non-stop silliness (Parts 1 thru 5)....

I only wish Ruth Paine and Buell Wesley Frazier would step up to their computers (if they have any) and type out something to put that silly little man named James DiEugenio in his proper place. A nice little slander suit against JD wouldn't hurt things one bit either.

I get a little sick of seeing Jimmy D. propping up his fantasies as if they were rock-solid, proven facts. When, in point of fact, DiEugenio has no PROOF of any wrong-doing on the part of Ruth Paine or Wesley Frazier.

But to a JFK conspiracy theorist like Jimbo, pure out-and-out speculation is a perfectly reasonable substitute for something called "Proof".

Ruth? Wesley? You out there somewhere?

I have better things to do than waste time with a loon like DiEugenio.

All of you are talented authors that do a great public service with the time you invest in explaining your take on the murders of President Kennedy, Lee Oswald, J.D. Tippit & the attempted murder of John Connally IMO. What you all have to say matters. Regardless of what anyone posts on the Internet, that is how I feel.

When it comes to bashing [a] person online, I believe in a fair fight. Otherwise, I see it as a case of bullyism. Nothing about a bully appeals to me at all in any way.

Most, if not all of Jim DiEugenio's critiques are posted online at CTKA. I've read David Von Pein's online rebuttal but haven't seen a response from the good Professor [John McAdams] or Mr. Reitzes yet. Each week I look for something.

I am sure Jeff Morley has his hands full trying to maintain balance on his website in an effort to be fair & objective. Those 2 words are drilled into the mind of every professional journalist, along with the words 'who, what, when, where & why'. It takes courage to write about people & organizations that have the capacity to kill them once their piece is publicized.

Just between us, I'd like to see all of you here working with Jeff someday. Between all of you combined no stone would be left unturned. The public couldn't ask for better IMO.

That link is to a thread about the closure of the [Education] forum. You posted a link to THAT thread about DiEugenio.

Why didn't you just post the same link here if that is what you wanted to bring attention to? I don't know why you would want to anyway... but some people really are gluttons for punishment.

Btw, you can bring Ruth Paine on any time. I have a few questions for her that have never been asked of her previously. She can't lie to me because I already have the answers.

I'd love to see you go up against Ruth Paine. Even at age 81, she'd make mince meat out of your silly conspiracy theories surrounding her. I can hear it now:

GREG PARKER -- "Hi, Ruth. Can you tell me if you helped plant Lee Harvey Oswald in the Book Depository in October of 1963? And what did you get out of it yourself? And are you connected with the Central Intelligence Agency (like your sister is, even though you pretended to know nothing about her involvement with the CIA)?"

RUTH PAINE -- "Your questions are ludicrous, Mr. Parker. Now let me ask you a question -- do you have even one ounce of proof to back up your vile accusation that I helped "plant" Lee Oswald in the Depository, or that I was part of some CIA plot to assassinate President Kennedy? I'll answer that question myself, Mr. Parker -- the answer is: No, of course you don't possess an ounce of proof to back up those claims. Nor does any other conspiracy theorist on this planet. So you are free to leave the room now. I'm done with you. And good riddance."


Ruth's simulated answer above would have been prefaced, of course, by a considerable amount of laughter from Mrs. Paine, which is exactly what happened when Ruth had to answer that same ridiculous "Are you a CIA agent?" question when Gerry Spence asked it in 1986:

And Greg Parker might like this 2013 video featuring Mrs. Paine. I'm guessing that a lot of conspiracy believers must think that Ruth is up to her waist in lies here: 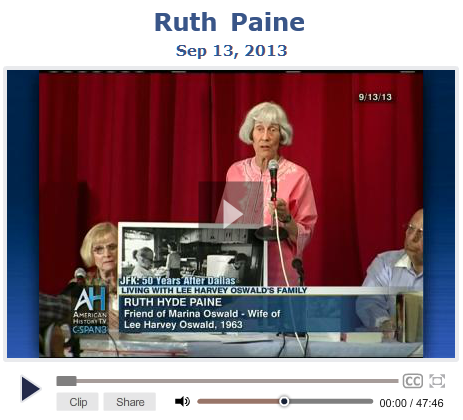 David, as much as you desire with all your heart and soul to IMAGINE I'm talking about some theory or other, I assure you I am not. I am in possession of verifiable facts that I would like to ask her about. I am sure she will pull the same schtick you are pulling right now. But that will just underline how uncomfortable these facts are for her.

David, the questions aren't for public consumption - yet. The answer to one however, will soon be available.