Clip did not come as part of the package and had to be ordered separate??

Per the Klein's ad, Robert, apparently the clip came with the 108 rounds of ammo that a purchaser could buy separately.

But there's no indication that Oswald purchased his bullets and clip from Klein's. If he had, the money order he sent Klein's [pictured below] would have been for more than just the $21.45 he mailed them. So Oswald must have bought his bullets (and clip) elsewhere. But if Klein's was selling lots of 108 bullets for the Italian Carcano, why wouldn't OTHER retailers have been selling those bullets too? 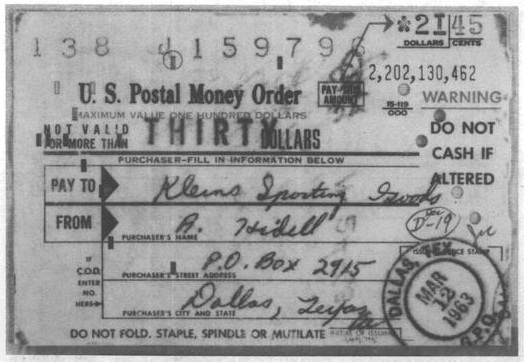 That was my thought also.

Interesting that he would buy a rifle, knowing it was useless without a clip.

Well, the rifle wasn't really useless without the clip. It could be loaded one bullet at a time. So for the Walker shooting, for example, he might not have even used the clip at all. He only took one shot--and he probably figured (and rightly so) that he'd only have time to fire one single shot at Walker, so the clip wasn't really needed there.

But at some point in order for him to fire those shots in Dallas, he would have had to buy a clip?

It does seem a bit strange for Oswald to not want to buy the pack of bullets, with the clip, right there from the Klein's ad. But he didn't.

But, by the same token, the CTers who insist that the rifle purchase in LHO's name (or Hidell's name actually) was all fake to frame Oswald---then why wouldn't the framers have wanted to add some bullets to the "fake" Oswald rifle order? Did the goofy plotters WANT people to say: Hmmm, where did he buy the bullets?

Is there any documentation from Klein's that LHO ever bought [a] clip or ammo from them, I wonder??

No, there isn't Robert. No records from Klein's for any bullet purchase. And as I said, unless Lee sent them a separate money order (or cash), his order was for $21.45, which only got him the rifle with scope (plus the S&H costs).

I think he did order the rifle, or at least I am not wanting to (right now) spend a lot of time on that. I don't think it adds to the conversation right now. But I wonder why nobody ever came forward to say "I sold LHO the clip"? Just something I think [the] WC never addressed? Loose end perhaps, inconvenient point maybe??

But how would somebody remember such a small, insignificant thing, like selling a guy some bullets or a clip, many months later? I don't think they would recall it specifically. Oswald was just another customer buying some stuff--like hundreds or thousands of others throughout America.

I think I would remember selling something to a "supposed" Presidential assassin. His face was plastered all over the place. This would be a chance to be part of history... just my thoughts.

But AT THE TIME OF THE SALE, you would have had no reason to say to yourself --- "Gee, this guy looks like he might be wanting to kill the President in about seven months, so I'd better make a mental note of this particular sale of these bullets and clip---just in case I'm asked in several months if I've seen this guy before."

No merchant would have had such a mindset upon selling Lee Oswald anything prior to 11/22/63.

Many military rifles of that era used 'stripper clips' which was convenient in battle to make quicker reloads, but it is not essential. My SKS rifle can use them but I usually prefer to just hand load my ammo into the chamber.

Many gun stores sell a plethora of military surplus rounds in crates by the thousands...someone buying a 20 pack of 6.5mm and a clip back in '63 is nothing memorable for a gun shop owner.

But by the same token, I could see someone seeing his face, president killer... saying I know that guy... or I met that guy or I remember selling that guy some bullets, etc.

Seems odd that nobody ever came forward.

Many such "Oswald sightings" did occur after November 22nd....just not from retailers who said they sold him bullets. But as you no doubt know, there were dozens of "I SAW OSWALD" sightings following the assassination -- e.g., the car lot incident, the Sports Drome Rifle Range incident [see video below], the Irving Sports Shop incident (re: the scope that a guy said Oswald had mounted), and an incident in a furniture store.