You do know the difference between HAIR & SKULL don't you? I was not debating the condition of the rear hair.

So you're in league with John Canal. (Yes, of course you are.)

Major problem with Mr. Canal's theory is this:

He wants to promote that the Parkland witnesses were correct when they said they did see a LOSS OF SCALP AND SKULL at the right-rear (occipital) area of JFK's head.

Of course, the autopsy pictures which show no sign of such SCALP damage totally knock down Canal's thesis: 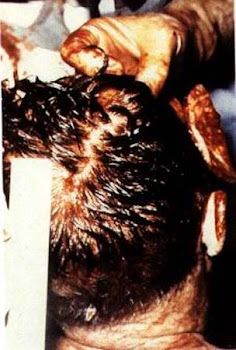 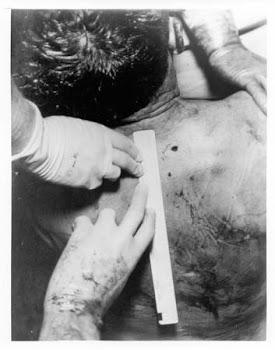 So, what does John Canal do? -- He creates another thesis to add to the first...i.e., the scalp was magically "sutured" to total perfection, which conveniently (for John C.) hides the great-big hole that the Parkland people said they saw.

And John then tries to shrink the size of his imaginary hole in the occipital area of JFK's head, even though nearly every Parkland witness said the hole was massive in size and not just "quarter"-sized, as John wants to conveniently shrink it down to.

DID JOHN KENNEDY HAVE A BIG HOLE IN THE RIGHT-REAR OF HIS HEAD AS SO MANY PEOPLE CLAIMED TO SEE ON NOVEMBER 22, 1963?

And that photographic record (IN UNISON -- EVERY single item, including the X-rays and the Zapruder Film) is answering that question loudly and clearly --- No.