I like to occasionally point out the fact that the "stretcher bullet" (CE399) WAS admitted as evidence at the television Docu-Trial in London ("ON TRIAL: LEE HARVEY OSWALD"), which is something that almost all conspiracists claim would be impossible to get admitted into evidence at a "real" trial. But Judge Bunton allowed CE399 to be talked about at various stages of the Mock Trial. 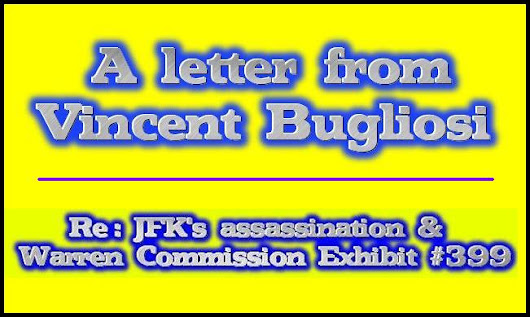 "The admissibility of CE 399 (along with other items of evidence) was, indeed, dealt with in London by Judge Lucius Bunton at a pre-trial evidentiary hearing, and Bunton, a sitting federal judge in Texas at the time, ruled in my favor that CE 399 (not the actual bullet, of course, which we did not have in London) was admissible at the London trial." -- Vincent Bugliosi; August 22, 2009

1. In my view, CE399 would be admissible. The chain of evidence is intact.

2. Wouldn't conspiranoids want the bullet to be admitted, just so they can throw scorn on it and imply it's proof of a conspiracy? What are your views?

Of course, when conspiranoids start talking about "admissibility", you know they're feeling uncomfortable, and acting like shoddy public-defenders, rather than people who are genuinely interested in the truth.

I doubt that any rabid conspiracy theorist would want to see CE399 admitted as evidence at ANY kind of a trial proceeding (of course, they conveniently forget that 399 was admitted by Bunton at the TV Docu-Trial, but, yes, that might be a tad different than a "real" trial), because it would then shoot down their whole decades-long argument about how that bullet would never have been allowed in at LHO's trial.

If it was allowed in at trial, then the conspiracists would be forced to wipe a whole lot of egg off of their faces.

Re: Admissibility of evidence, I always enjoy repeating this quote from Vince Bugliosi:

The first observation I have to make is that I would think conspiracists...would primarily want to know if Oswald killed Kennedy, not whether he could get off on a legal technicality.

Second, there is no problem with the chain of custody of much of the physical evidence against Oswald, such as the rifle and the two large bullet fragments found in the presidential limousine.

Third, and most important on this issue, courts do not have a practice of allowing into evidence only that for which there is an ironclad and 100 percent clear chain of custody, and this is why I believe that 95 percent of the physical evidence in this case would be admissible.

I can tell you from personal experience that excluding evidence at a trial because the chain of custody is weak is rare, certainly the exception rather than the rule. The typical situation where the chain is not particularly strong is for the trial judge to nevertheless admit the evidence, ruling that the weakness of the chain goes only to "the weight of the evidence [i.e., how much weight or credence the jury will give it], not its admissibility"." -- Vincent Bugliosi; Page 442 of "Reclaiming History" Endnotes (c.2007)